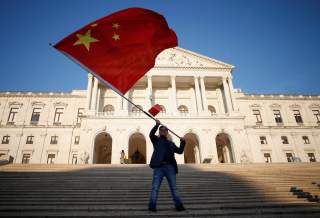 The recent controversy in the United States, Japan and Australia over the Chinese technology giant, Huawei, is also beginning to reverberate across Europe. Several European countries—including the United Kingdom, France, Germany and the Czech Republic—have all recently taken steps to scrutinize Huawei as they are preparing to hold auctions for awarding contracts to build out their respective 5G networks next year. Such steps are welcomed by Washington, which is actively pushing its allies and partners around the world to be more vigilant about Chinese 5G due to national security concerns.

In the UK, the country’s largest telecom provider, BT, has already announced plans to remove Huawei equipment from its existing networks. This is a far cry from the previous David Cameron government’s lax approach toward China. Even the screening mechanism it introduced, the Huawei Cyber Security Evaluation Centre (HCSEC), failed to provide complete assurances that all risks to British national security posed by Huawei's involvement in the UK's critical networks were “sufficiently mitigated.” Last summer, representatives of the “five eyes” (top intelligence chiefs for the United States, Canada, the UK, Australia and New Zealand) also decided to send strong warnings about risks presented by Huawei and ZTE, a state-owned Chinese telecommunications manufacturer.

In Germany as well, there are concerns around the Chinese National intelligence law, as the intelligence community fears that Huawei could be asked by the Chinese government to incorporate “backdoors” into their equipment, allowing access to encrypted data for spying or sabotage purposes. Deutsche Telekom has recently decided to review its vendor plans in light of recent debates of the security of Chinese network equipment while France’s Orange has already severed ties with Huawei. Under the guidance of ANSSI (Agence Nationale de la Sécurité des Systèmes d’Information), French security agencies have been warning ministers for over a decade about potential risks, barring Huawei from government contracts—despite very competitive offers from the Chinese manufacturer.

Yet, despite the recent uptick in the debate in Europe on Chinese 5G, many local providers are still working and testing with Chinese manufacturers, particularly Huawei. Huawei has signed MoUs with wireless providers in at least eight European countries and has tested with local providers in at least twelve EU member states. Earlier this month, Portugal’s top wireless provider Altice signed a deal with Huawei to upgrade its networks to 5G.

Given this deep market penetration and the fact that Huawei is a global industry leader with highly competitive prices, simply banning Huawei from supplying 5G equipment or removing them from existing networks in Europe is unlikely. Some European operators are also concerned that the exclusion of Chinese firms would lead to fewer vendors and, consequently, higher costs. On top of this, Huawei has skillfully managed to leverage its inroad into smartphone devices to gain credibility with European consumers as a reliable network provider. Within five years, Huawei products have become popular on Europe’s retail market in a way few would have imagined. In 2011, it has also set up a business-to-business ecosystem focusing on supply, maintenance and providing technical advice for private sector companies and public institutions across Europe. Finally, Huawei is actively advertising across Europe and has hired lobbyists and consultants to help promote itself. Recently, Chinese manufacturers have been shifting their efforts towards the European market even more strongly.

Unlike in the United States, where Huawei’s role is far more restricted and skepticism surrounding Chinese technology is subject to far greater sensitivities, few European countries perceive China as a strategic rival. This means that for the time being, a coordinated transatlantic approach toward Chinese 5G is unlikely to emerge. That said, Europe may soon no longer have a choice. The Trump administration has made clear that it expects allies and partners to take steps to limit Chinese 5G, and to protect the security of telecoms networks and supply chains.

Notwithstanding such U.S. pressure, Europe also has good reasons on its own to take a more stringent approach toward Chinese 5G. First, the European Commission has established that Huawei was able to become the EU’s top telecommunication supplier in record time by receiving subsidies from Chinese state banks and other financial entities. Second, European officials acknowledge that critical infrastructure built with technology manufactured in China may give Chinese companies access to vast troves of sensitive data and industrial information—which ultimately might be turned over to Chinese authorities. Moreover, Chinese-manufactured infrastructure could make European countries vulnerable to Chinese spying, cyberattacks delivered through the network infrastructure, and overall national security threats. European Commission Vice President for Digital Single Market Andrus Ansip said earlier in December that “I think we have to be worried about Huawei and other Chinese companies,” recalling the mandatory collaboration between certain technology companies and intelligence agencies in China.

In the 5G era, these concerns are mounting as the number of connected machines and objects and reliance on fast data increases. Anticipating that 5G will transform the way humans communicate and operate supplies like power, water and health systems, the security risks connected to 5G infrastructure become significant. Other risks associated with relying on Chinese 5G equipment include intellectual property losses and a dependency on foreign infrastructure (China currently manufactures about 90 percent of the world’s IT hardware).

On top of these apparent national security concerns, there are also economic rationales to avoid becoming overly reliant on China in the digital age. 5G and its associated infrastructure are poised to be critical building blocks for the digitization of the global economy, enabling a wide variety of applications and new sectors such as advancing artificial intelligence systems and the Internet of Things. The potential payoffs of being a 5G leader are enormous—a European Commission study estimated that investing €56.6 billion in 5G networks could yield economic benefits of €113.3 billion annually and generate 2.3 million new jobs by 2025. Patent-holding companies are slated to make billions in royalties, and countries with large and reliable networks will be able to develop emerging and new technologies with faster speeds.

In this emerging competitive technological landscape, ensuring that Europe is a global leader in 5G is essential. China, South Korea and the United States are currently leading the race to 5G, with China pulling ahead. Although the EU and several of its member states are investing more in 5G and two Scandinavian companies (Nokia and Ericsson) are leading 5G technology manufacturers, the transition is not happening broadly or quickly enough. Losing the race to 5G would have significant negative repercussions on Europe’s economy, along with the strategic implications of falling behind on the development of emerging technologies.

Unfortunately, the current debate in Europe on how to enhance “strategic autonomy” is too narrow as it focuses mainly on carving out foreign policy independence from the Trump administration. How to ensure European sovereignty in the digital age deserves more attention. This starts with boosting European R&D spending, favoring European alternatives to Huawei, better understanding the security risks of Chinese 5G, and beefing up national and EU-wide investment screening schemes. Greater transatlantic information exchange and intelligence sharing with the United States on China is also called for.

Yet, even if Chinese telecom infrastructure companies like Huawei and ZTE are not formally curtailed, the combination of the EU’s forthcoming investment screening framework and growing U.S. pressure may see Chinese investments in European 5G decrease. Even though relying on European providers may be more expensive and potentially delay the 5G deployment, avoiding an over-reliance on any foreign companies could support the EU’s “strategic autonomy” agenda in the digital age whilst also benefiting the European economy long-term.

In a world marked by growing geopolitical rivalry between Washington and Beijing, American allies will increasingly face a stark choice between the two. Continuing to rely on Chinese 5G manufacturers could cause a rift in the already fragile transatlantic relationship. A split into China and non-China 5G networks could cause minor interoperability issues, but more importantly, the U.S. push for a “China-free” 5G deployment could eventually generate two politically divided spheres of technological influence.

How Europe should best navigate these stormy waters must be at the core of the European strategic debate in 2019.

Erik Brattberg is the director of the Europe Program and a fellow with the Carnegie Endowment for International Peace.

Philippe Le Corre is a senior fellow at the Harvard Kennedy School and a non-resident senior fellow with the Carnegie Endowment for International Peace.