Why China's Military Budget is Larger Than it Appears 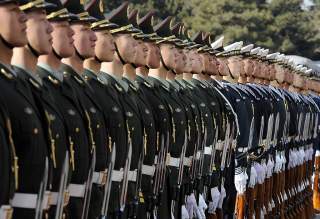 “Let me be very clear, there is no such thing as opacity in China’s military spending,” China’s finance minister Xiao Jie said at a March press conference in Beijing on the sidelines of the annual meeting of the National People’s Congress, the national legislature.

Chinese officials are now scrambling, either to clear up a misunderstanding about the Ministry of Finance’s awkward presentation of the budget for the People’s Liberation Army or to cover up a cover-up.

In either case, this year the budget for the Chinese military, always controversial, has become even more so.

While Beijing is trying to tamp down the budget controversy, two things, which on their face look contradictory, are becoming apparent. At the same time, the rate of growth of military spending has dramatically slowed and China’s military is in the process of taking over a larger proportion of the Chinese government budget.

We begin with the fascinating rollout of the Chinese military budget. On Saturday, before the start of the annual meeting of the Congress, Fu Ying announced that China will spend “about 1.3 percent” of its gross domestic product on its military this year. That, she said, represented an increase of around 7 percent over 2016.

Fu, a veteran diplomat now serving as a spokeswoman for the Congress, did not give a total figure for the military budget.

The omission became a matter of public controversy on Sunday when, at the opening of the Congress, the Ministry of Finance released its report, which did not include a figure for military spending. “For the first time in decades, Beijing has not revealed its defense spending total for the year despite a stated commitment to transparency in military outlays,” wrote Hong Kong’s South China Morning Post.

Finally, on Monday the Ministry of Finance, obviously hoping to end speculation, came up with the total amount of the PLA’s budget, 1.04 trillion yuan ($152 billion).

China’s spending, in reality, is well in excess of that number. Yet although the announced number is known to be inaccurate, reported percentage changes are thought to generally reflect trends in military spending.

There are indications that the low 7 percent figure, in fact, reflects a real slowdown in growth of military spending. For instance, the Ministry of Finance also did not initially release a figure for the country’s social security budget. As social security spending is especially popular in China these days, there would have been no reason to try to hide this figure if Beijing was contemplating a big spending increase.

In China, some think the low percentage increase in the military budget is real, that it was intended to avoid alarming neighbors already concerned about the PLA’s rapid buildup. Accordingly, some take the view that the smallish increase means Beijing is refusing to engage in an arms race with the United States.

Yet even if China’s percentage increase is lower this year than last, countries in the region should not relax. The PLA now appears to be rapidly increasing its call on central government resources.

“Significant portions of the budgets for the ministries of transportation, education and communication also support PLA capabilities, as increasingly so do the budgets of Chinese companies forced to contribute to ‘civil-military integration’ schemes,” Richard Fisher told the National Interest. “These expenditures are not included in the ‘official’ annual spending increase figure.”

As a result, Fisher, a senior fellow of the International Assessment and Strategy Center, concludes that the increase in China’s real military spending, once everything is taken into account, “could easily top 10 percent.”

The integration Fisher highlights is a high priority of Chinese president Xi Jinping and could become one of his signature initiatives. In January, People’s Daily, China’s most authoritative publication, reported that he would “head a new central commission for integrated military and civilian development.” The integration, the paper noted, was authorized by the full Politburo.

One of the most important trends in China today may just be the military’s takeover of civilian resources. “The goal is to mobilize as much of its civilian economy as possible to support military expansion,” Fisher points out.

Think of this as the militarization of China’s civilian agencies.

In any event, debates about spending in any particular year have to be put in the context of long-term trends. As James Fanell, who recently retired as director of Intelligence and Information Operations for the U.S. Pacific Fleet, told the National Interest, “Beijing cannot deny the fact that for nearly thirty years spending on the PLA has increased each year and today stands as the single largest military spending program of all the nations combined throughout Asia.”