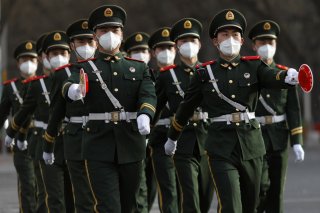 In 2018, economist Julian Chan and I developed a machine-learning algorithm that predicts the Chinese government’s moves by analyzing words in the People’s Daily, China’s version of Pravda. Fast forward to when the dust settles on the novel coronavirus pandemic, also known as COVID-19, and this bot will come in handy as countries regroup and need to reassess how they deal with China. The biggest question is not about any short-term impact but rather what will become of the Chinese regime in years to come.

The bad news is, China may be digging in for a more authoritarian rule. But the world is watching, and it’s not too late for President Xi Jinping to change course.

There’s no question the Chinese government will draw lessons from this tragedy, but “more transparency” will not make the cut. Instead, post-crisis China may become even less free. The aftermath of mainland China’s severe acute respiratory syndrome (SARS) epidemic in 2003 shows us why.

There are obvious similarities between the two outbreaks. The Chinese government’s first instinct was to conceal information. But as the truth got out, draconian controls were imposed to contain what had become an epidemic. Those who lost their loved ones blamed the government’s inaction, while those who did not complained about its overreach.

What did the Chinese government learn from its SARS experience? In a 2003 interview, then-Premier Wen Jiabao told The Washington Post that the lesson learned was that they had to emphasize “coordinated development.” The public would not have panicked, had the information been better controlled. The outbreak would not have hit the poor so hard, had the government more evenly distributed the resources between haves and have-nots. And, things could be much worse without the government’s pervasive hand. In short, people needed more controls and interventions.

In 2005, this reasoning materialized into then-President Hu Jintao’s signature “harmonious society” strategy—slowing down market reforms and tackling social problems via government force. Those who wish to do so can debate whether they like the more authoritarian China this strategy resulted in, but it clearly did not prevent another epidemic. Exhibit one: the coronavirus.

Early signs suggest that President Xi may spearhead a similar patriarchal campaign when the coronavirus is no longer a threat. In the midst of the crisis, President Xi stressed to his party the importance of ending poverty in China by year’s end. With the poor taking a bigger hit as a symptom of the epidemic, poverty seems to be taken as a root problem, again. More alarming is that, as the disease continued to claim lives, the top official of Wuhan, the epicenter, was quick to call for a “gratitude education” among the residents—gratitude for the government’s decisive action to lock them down. The escalated tensions between China and the United States, as China pushed false narratives of the pandemic, are no good sign either.

The risk of a more authoritarian China should concern everyone. But the good news is, the bot we developed, the Policy Change Index (PCI) for China, can help us keep an eye on the country.

The PCI program predicts China’s policies by “reading” its propaganda. This works because, to the extent that public opinion matters, the government has an incentive to change people’s minds before implementing its policies. In the Soviet model, which China adopted decades ago, this was conveniently called “economic education.”

The “economic education” leading up to the “harmonious society” shows up distinctively in the PCI. As the SARS epidemic died out in 2004, the propaganda drastically shifted from being pro-market to being pro-intervention—over a year before the policy change. State-owned enterprises, for example, were once considered inefficient. But they quickly became a great idea, simply because they now fit the government’s agenda.

President Xi’s track record of “economic education” is no less concerning. Our PCI predicted last January when the trade war was still heating up, that China would not back down on the American demands for structural changes, a prediction that remains standing. What did happen, as our analysis suggested, is a turn of the Chinese regime toward more hardline positions, both domestically and internationally.

It may be too early to tell if President Xi’s heart is set for “more harmony” after the coronavirus—and our bot is watching closely—but that also means his administration still can prevent that from happening.

The state’s strong hand is by no means unique to China—it looms in all countries and is often boosted by crises. In his 1971 book, Bureaucracy and Representative Government, economist William Niskanen put forth a powerful theory of government growth: A bureaucrat’s objective is to maximize their budget and, by extension, their existence. When crises strike, this kind of expansion becomes more likely. Understandably, averting an emergency often requires enacting emergency power. But the problem comes when the crisis goes away: the power may not. This is why, in his 1961 farewell address, former President Dwight D. Eisenhower called for rolling back the “unwarranted influence” by the military-industrial complex, now that the major wars were over.

This time is no different. Not rolling back China’s crisis-era power will cost itself and the rest of the global economy. The world is taking note, and so should President Xi.

Weifeng Zhong is a senior research fellow with the Mercatus Center at George Mason University and a core maintainer of the open-source Policy Change Index, a machine learning framework to predict policy changes.