I Visited the Chinese-North Korean Border. Here's What I Found. 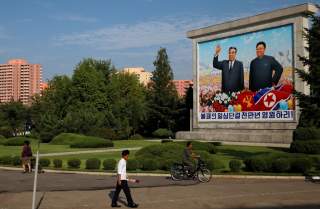 Amid a stalemated America-North Korea dialogue over an end-war declaration, President Donald Trump unequivocally said on September 25, “The sanctions will stay in place until denuclearization occurs.” Behind his remark is a long-standing belief shared by many North Korean watchers. The belief is that Kim Jong-un, a young and callow leader of one of the most economically backward and socially unstable countries in the world, would feel his throne jeopardized by his country’s dire economic conditions brought on by the draconian enforcement of international sanctions. This theory then suggests that such pressure would eventually lead Kim to succumb to Washington’s demands so that he could stay in power. For instance, North Korea’s conciliatory gesture from this year onwards seemed to further strengthen this belief. In fact, the White House, after witnessing Pyongyang’s sudden reversal, also attributed Kim’s change of behavior to Trump’s “maximum pressure campaign.” However, was the North Korea’s volte-face really made possible thanks to the sanctions? Maybe yes, maybe no. The truth is a bit more complicated than widely assumed.

Between August 24 and September 3, I traveled the entire 1,334 km-long Sino-DPRK border—from Donggang, a county-level city of Dandong and the westernmost tip of the border, to Fangchuan, a village in Hunchun city and the easternmost point of the border. The purpose of this eleven-day trip along the border with multiple buses, taxi rides, and walks was twofold. I wanted to check on Chinese enforcement of United Nations sanctions against North Korea—given that the border has long been criticized as porous enough to enable illicit Chinese-North Korean trades even though Chinese authorities have repetitively affirmed their commitment to UN sanction enforcement. At the same time, I also wanted to learn about the economic conditions of North Korea by observing North Korean border cities in person. I did this because although many foreigners have been to North Korea, their films, photos, and testimonies were not sufficient since the spots their travel was very restricted. Below are the answers I found.

First, unlike the prevalent claims, Chinese economic sanctions against North Korea were strictly enforced. Development of Chinese-North Korean joint free-trade areas in Hwanggumpyong and Wihwa Islands—two islands located on the lower reaches of the Yalu River symbolizing economic cooperation—remained suspended. A new Yalu River Bridge connecting Guomenwan in China and Yongcheon in North Korea, which was agreed to be built when then Chinese Premier Wen Jiabao visited Pyongyang in October 2009, was now entirely constructed, but remained out of operation. In point of fact, not only was the newly-built bridge blocked but so were other older ones.

Interviewees’ accounts supported my observation. A Chaoxianzu businessman—an ethnic Korean residing in China—who has been engaged in business with North Korea for over thirty years, including over 250 visits to North Korea, said, “Trade [with North Korea] became really tough. When the Sino-U.S. relations were good, local governments [of China] would connive [at trade with North Korea]. . . . However, as the U.S. began to pressure, the governments completely suspended it.” When asked about illicit trades, he answered, “Smuggling is now totally blocked, and a lot of people were arrested [on a charge of smuggling]. . . . These days, there is also a patrol at night.” Furthermore, he told me that “Dandong even has a policy of rewarding those who report smugglers [to the police].”

Another businessman residing in Dandon, China’s most significant business hub with the North, confirmed this saying “A crackdown on smuggling is truly brutal.” Likewise, a Chinese businesswoman who had a family business with North Korean companies in Pyongyang for around twenty years grumbled that her business has dwindled by 80-90 percent since the recent UN sanctions. Recent statistics also illustrate these changes, with China’s trade volume with North Korea plummeting 10.5 percent from 2016 to 2017—the lowest level since 2014.

Second, it was evident that economic conditions in North Korea, the dramatic declines in trade volume notwithstanding, have improved a lot. Along the border, many villages were transformed into cities. Moreover, existing cities, such as Sinuiju City and Sakchu County in Pyongan Province, Manpo City in Chagang Province, and Kimjongsuk County in Ryanggang province, all grew bigger. Especially astonishing were those in Chunggang County located in the northern tip of Chagang province and Hyesan City in northern Ryanggang province. A large modern industrial complex called the March 5 Youth Mine was fully built in Chunggang County. The complex, which came into operation in 1974 as a copper mine, was considerably modernized under Kim Jong-un to become a molybdenum production facility. Since August 4, 2014, it was expanded to encompass approximately 9.94 square kilometers with several adjacent villages. So far, the complex feeds at least thirty thousand people living nearby.

Hyesan City was also transformed into a modern city. Shabby shanties with pro-Kim Jong-il propaganda banners were demolished, and replaced by hundreds of new modern-style condominiums and public facilities, including a train station, playground, and customshouse. All of these, according to a Chinese resident in Linjiang—Hyesan’s neighboring city directly across the Yalu River—were constructed during the last four to five years. Taxis with passengers as well as fully loaded freight trucks and trains constantly went back and forth until midnight. Furthermore, North Koreans seen through binoculars looked lively; people were wearing Korean traditional clothes were dancing together in a square, while couples dressed in colorful western attire were dating.

People in other smaller villages also seemed better off, albeit still poor. While I was taking multiple boats in the Yalu and Tumen River, well-fed villagers were netting fish, and kids were cheerfully swimming, both of whom often waved their hand at me. Considering that these small villages are very remote places located far from big cities such as Pyongyang or Hamhung, it was apparent that North Korea’s economic conditions have vastly improved. In other words, North Korea seemed to have found its own internal impetus for economic growth, unless there was a loophole to UN sanctions. Many people that I interviewed pointed out Kim Jong-un’s policies for marketization, including Farmland Responsibility System and Socialist Enterprise Responsibility Management System, as crucial drivers or economic improvement. According to them, North Korea already began “reform without opening-up.” Frequently-found banners reading “All for Improvement of People’s Life” bolstered their claims.

Kim Jong-un offered an olive branch this year. Perhaps, it is correct that he made the abrupt volte-face due to international sanctions. Nevertheless, it does not mean that he capitulated to the pressure, nor does it mean that his throne, due to economic hardship, is in jeopardy. In fact, North Korea’s economy made considerable progress despite the enforcement of sanctions. That progress means that Kim took a dangerous but well-calculated gamble to lift sanctions and continue the economic growth—possibly with economic assistance and energy supply in return for relinquishing or freezing nuclear programs.

In other words, international sanctions didn’t impact his throne, but his vision as a leader. Should this be the case, Pyongyang can withstand the pressure of the current stalemate with America a lot longer than widely expected. Even if Washington does not acquiesce to Pyongyang’s demand for a declaration to end the Korean War and continues the pressure, North Korea does not have much to lose, other than Kim Jong-un’s ambition to build “a strong and prosperous country.” Sanctions could reduce economic growth, but cannot jeopardize Kim Jong-un’s rule. Furthermore, while the diplomatic stalemate continues, Pyongyang may find sanctions loopholes, their enforcement may slacken off. In a nutshell, although punitive sanctions brought Kim Jong-un to the negotiation table, they are no longer a panacea. Now, time is on Pyongyang’s side.