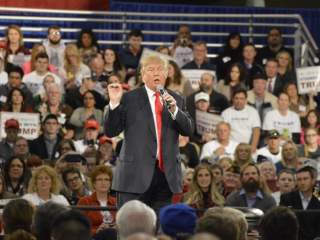 When the Rev. Jesse Jackson ran for the Democratic presidential nomination in 1984, he defined his constituency as a “rainbow coalition” of racial and ethnic minorities—blacks, browns, yellows, reds—as well as women. Few noted at the time that Jackson’s colorful coalition included everybody in America except for one group—white men. He would accept white women so long as they were willing to separate themselves politically from their husbands and fathers.

Jesse Jackson was ahead of his time. There was little indication in 1984 that white men felt particularly beleaguered by the reverend’s sly locution aimed at isolating them and implicitly identifying them as the enemy. Jackson lacked the political force to generate that kind of unease. But now, three decades later, white men do indeed feel beleaguered by a host of social, cultural and political trends that are transforming the country more rapidly and forcefully than it has ever experienced before. And this feeling is agitating American politics in ways that were not anticipated by most of the liberal elites, though they were entirely predictable.

This feeling of anxiety is particularly intense among working-class whites, which has some commentators scratching their heads. After all, they reason, these are people who should welcome big governmental programs aimed at providing largess for citizens such as themselves, at the expense of people who are richer than themselves. As New York Times reporter Eduardo Porter puts it, “What’s going on with working-class whites?”

Porter explored that question in a recent Times article entitled “Racial Identity, and Its Hostilities, Return to American Politics.” The piece manifests a fair amount of ignorance and a lot of underlying bias. In seeking answers to his question, he looks at the white working-class rather as an entomologist might inspect an insect under a microscope—such a fascinating specimen posing such a research challenge.

His conclusion is that racial and ethnic animosity has grabbed these people and directed them toward embracing presidential candidates such as billionaire Donald Trump and Texas Senator Ted Cruz, both a far cry from the kinds of liberals that Porter apparently thinks would be the more appropriate recipients of working-class support.

Porter notes that President Obama and Vermont Senator Bernie Sanders have speculated that job and wage stagnation have contributed to blue-collar support for Trump and other conservative populists. But he finds this explanation “not quite satisfactory.” He’s more inclined to attribute white Americans’ support for Trump’s “xenophobic, anti-immigrant” message to anxiety over the loss of the country they lived in fifty years ago, when non-Hispanic whites made up more than 83 percent of the population compared to today’s 62 percent.

Porter is not entirely unsympathetic to this sentiment. “Their fear is understandable,” he writes, noting that Hispanic and black Americans “often care about different things than white voters do.” But he adds that the “reaction of whites who are struggling economically raises the specter of an outright political war along racial and ethnic lines over the distribution of resources and opportunities.”

In other words, it’s all about race—more specifically, the racial attitudes of whites. Race, after all, he notes, has shaped American politics for a long time. The GOP, he says, captured the South politically because of whites’ “sense of betrayal” over Lyndon Johnson’s desegregation policies. And it was race, he avers, that led to the “unique mistrust of government among white Americans.” Indeed, he declares that America’s “unusually minimalist state” is attributable “in large measure to racial mistrust.”

Here’s where Porter’s line of reasoning gets squishy. Yes, race is ever-present in American politics. And Johnson’s civil rights initiatives no doubt made possible the Republican “Southern strategy” that followed. But does that mean that race dominates the political consciousness of whites in the South today? If that’s the case, how is it that the South currently has two Hispanic senators, a black senator, and two Indian-American governors. Clearly, many white voters in that region are comfortable voting for people of color.

And the idea that America’s tradition of limited government is attributable primarily to racial sentiments is ludicrous on its face. Porter needs an immersion course in American history, which would reveal to him that this political philosophy is a product of the Western heritage. It was a fundamental philosophical underpinning of the Constitution. As the debates of the Founding Fathers in Philadelphia attest, they were obsessed with the challenge of keeping in check a government that they knew would seek to aggrandize its power whenever possible.

Porter devotes a considerable part of his article to a pastiche of studies purporting to establish that race drives the politics of white Americans. He quotes one paper as saying, “Racial animosity in the U.S. makes redistribution to the poor, who are disproportionately black, unappealing to many voters.” He quotes another as saying that white taxpayers oppose welfare because they don’t want to be “forced, through taxes, to pay for stuff for blacks that many of them could not afford for their own families.”

This is all very flimsy. Since the beginning of the Republic, Americans have been rallying to philosophical arguments against redistributionist policies, and those arguments animated political debate long before the emergence of the country’s current racial mix. And you don’t have to be motivated by race to resist being forced, through taxes, to pay for stuff for people when you can’t afford such things yourself.

Which brings us to the underlying motivation of this kind of social commentary—to delegitimize the sentiments and feelings of white Americans, particularly working-class white Americans. Racism is not tolerated in our country, which represents a profound cultural shift within just a few decades. It also provides a weapon for liberal commentators. If a political impulse can be shown as emanating from racial sentiments, it becomes ipso facto illegitimate. That’s why writers such as Eduardo Porter toss around such value-charged words as “xenophobic” and “anti-immigrant” to portray white political sentiment.

What’s interesting about the Porter piece, as in so much liberal thinking these days, is how lopsided it is. If a black American at the lower rungs of the economic ladder votes for redistributionist policies because they benefit him—at the expense, let’s say, of his working-class neighbor across town who is struggling economically—then that’s just fine. No racial implications there. But, if that working-class stiff complains, then he gets placed under the microscope of those liberal entomologists and dissected for signs of errant thinking.

If someone from Mexico comes to the United States, even illegally, and promptly embraces a political outlook calling for more immigration so his outlook and his ethnic group can overwhelm the politics of old, that’s natural. No one suggests such behavior could “raise the specter of an outright political war along racial and ethnic lines.” He’s merely looking out for his own people in the political arena. But, if a white man resists that development and wants his government to enforce its own immigration laws, then he’s a xenophobe.

This double standard suffuses the output of the liberal media in America—NPR, MSNBC, the New York Times and many more. It renders impossible a measured, balanced interpretation of what’s really going on in American politics and American society.

Yes, many white Americans feel beleaguered these days. They see the progressive transformation of the country they grew up in, and their parents grew up in, and their grandparents. And they don’t like it. They don’t expect Chris Matthews, for example, to agree with them. But they do wish he would stop maligning them for wanting to employ American politics to protect their interests, just as Americans of other races and ethnic groups do.

In his Times piece, Porter points to Europe as a place also where “voters are increasingly drawn to xenophobic politics.” Former German foreign minister Joschka Fischer, notes Porter, attributes this to fears “based on the instinctive realization that the ‘white man’s world’—a lived reality assumed by its beneficiaries as a matter of course—is in terminal decline.”

The white man’s world is indeed in decline throughout the West. Perhaps it’s even in terminal decline. If so, that would be a development of immense dimension in the history of Western Civilization. In America, that question will be answered in the political arena, where those who lament that decline have every bit as much legitimacy as those who celebrate it.