If Britain Is to Leave the EU, London Must Double-Down on NATO 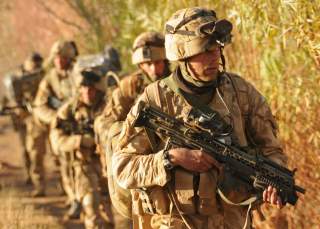 In his first interview since being elected chairman of the NATO military committee, the UK’s Air Chief Marshal Sir Stuart Peach attempted to promote the centrality of the military alliance to European defense, stating the European powers should not attempt to duplicate NATO efforts. His comments come at a time of deep geopolitical uncertainty, with threats from within and threats from without rocking the once-solid Western alliance. Domestically, they also come as the UK MOD attempts a review of the 2015 Strategic Defence and Security Review. Inside the Western alliance, a number of rifts have opened up between those states moved by 2016 populism (i.e., post-referendum London and post-Trump Washington), and those continentalists who wish to double-down on the European Union project (i.e., French president Emmanuel Macron and German chancellor Angela Merkel). Inevitably, this raises a number of critical questions about Britain’s role as a military power, the future of its influence inside NATO, and the overall effect its leadership will have for the Western alliance.

The Western alliance has long been cushioned from external threats by its strong economic leadership, its liberal-democratic philosophical foundations, and its formidable military technological advantages. One by one, these three pillars of Western strength have been weakened or seriously undermined. In the first instance, the Financial Crisis of 2007–08 came about because of poor regulations, hubris and large amounts of Chinese liquidity in the international markets. In the second instance, the very success of globalization—the internationalization of capital and labor—came with a hidden barb. In the wake of two decades of the offshoring of manufacturing and the import of cheap labor, Western working classes have run to elect populist leaders and far-left parties in order to punish the “Davos set.” The final pillar of military technological advantages has fallen prey to complacency and the inability of political leadership—notably in the European part of the West—to argue for a defense spending proportional to the declining security environment.

This declining threat environment is no longer a matter of debate as it was a decade ago. No longer concerned with “failed states,” the West has other, more pressing concerns on its western and southern borders, including Russian revanchism, refugee flows and ISIS-organized attacks within the West. The recent decision by Sweden to conduct joint military exercises with American and French armed forces earlier this month—in the wake of a large Russian exercise—signals the return to a Russia seemingly hungry for prestige and for a sphere of influence. Given its willingness to attack Western democracies at the ballot box, it has become clear that Russia poses a unique and singular threat to Europe. Despite these very real threats, the West continues to suffer from a lack of internal cohesion. Expressing a sense of European disenchantment with both the United States and the United Kingdom, Chancellor Merkel recently proclaimed, “The times in which we [Europeans] can fully count on others are somewhat over, as I have experienced in the past few days.” While Germany’s frustrations are somewhat unfair—given its shoddy record on the 2 percent rule—it does mark a dangerous trend toward fragmentation in one of the world’s most long-lasting and successful alliances.

Assuming that British policymakers understand the worth of our influence inside NATO, it is therefore incumbent that future governments stop the cutting of the armed forces. Media reports indicate that the Royal Marines face the prospect of a one thousand service-personnel reduction in order to save £3 billion per year over the following ten years; the decision is due to be made by the 2015 Strategic Defence and Security Review in late November this year. According to a series of publications commissioned by the Ministry of Defence, the total strength of the British forces service personnel has decreased by 0.4 percent; full-time trained strength and trade trained strength [Royal Navy/Marines, the Royal Air Force, and the Army, respectively] have experienced a fall of 1.4 percent since August 1, 2016. Although the total number of trained and untrained strength of the Tri-Service Future Reserves 2020 rose by 3.6 percent to 36,580 personnel, total intake (in sum) has collapsed: Whilst outflow from the regulars has fallen by 6.2 percent, subscription intake for the Future Reserves 2020 dropped by an astonishing 16.6 percent, whereas outflow increased to 4.4 percent. Equipment and formations also experienced steady quantitative decreases: totalling 4,098 key land platforms—consisting of 1,763 armoured personnel carriers, 1,907 protected mobility vehicles, and 428 armoured fighting vehicles—thirty-one reductions of platforms took place over the last twelve-month period, due to a deterioration in the number of Mastiff protected mobility vehicles (from 421 to 396); most saliently, there occurred a drastic 37 percent reduction following the withdrawal of the Black Hornet spy plane from service, with a reported 281 unmanned aircraft systems.

It should be noted that decline is not preordained; it’s a political choice, and one that we don’t have to make. Yes, it is true that United States—and Western power—is declining, but this is for the moment relative, not absolute. Given its strong assets, its unique geographical advantages, a network of far-flung bases, and a strong defense industrial base, British power remains formidable. In a recent report conducted by the Henry Jackson Society, James Rogers created a power index, using seven key indices, including: economic clout, diplomatic leverage and military strength. His findings show that Western powers “still stand tall in the world, and the US still towers over everyone, goes against the grain of both popular perception and media narratives. Therefore, talk [of the eclipse of the West] is still premature from the perspective of geopolitical capability.” As Professor Yukon Huang notes in his recent book on China, Americans and Europeans are most likely to believe that China has surpassed the United States as the world’s greatest economic power. Asians—and the Chinese themselves—recognize that China has some way to go before it approaches U.S. levels of total power.

If Britain is to succeed in the post-Brexit world, it will have to do so with a strong sense of its position in the global community. Its national power also stems from three pillars, which girded the West: a strong economy, a belief in liberal democratic values, and a strong military-technological base. With its permanent seat on the United Nations Security Council, its strategic submarine force, a robust diplomat service, and an influential role inside NATO, London can continue to play a major leadership role inside the West. However, it must develop strategies that strengthen these pillars and not rest on its laurels. If defense spending continues to drop, how long can the UK lead? If its artificial intelligence and telecommunications firms continue to be bought by China, then how will the MOD craft its future war-fighting plans? The UK has stepped back from the European project, but it should be noted that the project has always been just one aspect of a Western alliance that has maintained peace and security for its members—and a large part of the global community—for nearly seventy years.

Jack Wright is a research analyst at Henry Jackson Society.