If Britain Opts for Corbyn, Then the New Prime Minister Will Clash with Trump Over Israel 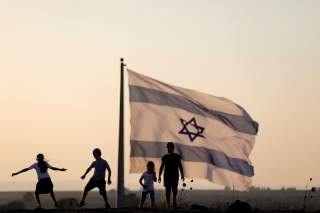 The signs of breakdown in the liberal international order are mounting, and they’re coming from disparate directions: Washington battles its closest allies on trade, Beijing and Moscow come together more closely militarily in an anti-U.S. alliance, and Beijing seeks to make its territorial expansion a fait accompli in the Pacific.

But the liberal order is as much about values as about alliances and power plays. In that sense, the most striking recent manifestation of its breakdown involves Washington and London—long-standing partners in the “special relationship”—and their point of contention is, of all things, Israel.

At the moment, the United States is upending decades of conventional wisdom about how to approach the “Middle East peace process” by aligning itself more tightly with its ally in Jerusalem. Great Britain, meanwhile, faces the prospect that, under Jeremy Corbyn, its Labour Party will seize power and bring an ugly anti-Zionism—rooted in an undeniable anti-Semitism—to 10 Downing Street and the halls of Parliament.

That would put Washington and London, which (with a few notable exceptions) have cooperated for decades on global matters, on a collision course over the Israeli-Palestinian conflict and larger Arab-Israeli peace—reflecting a clash of values and a decline in esprit de corps across the Western alliance.

The Trump administration announced this week that it will close the Palestine Liberation Organization (PLO) office in Washington, and administration officials tied the move to the Palestinian Authority’s refusal to negotiate seriously with Israel and to its threats to take the Jewish state to the International Criminal Court over its settlement policy and recent violent clashes along its border with Gaza.

That move comes in the wake of President Donald Trump’s decisions to move the American embassy in Israel from Tel Aviv to Jerusalem, to cut hundreds of millions of dollars in U.S. bilateral aid to the Palestinians, and to end U.S. funding of the United Nations Relief and Works Agency (UNWRA)—which has provided huge sums to Palestinian refugees over the years while, critics say, vastly exaggerating the number of such refugees and nourishing anti-Israeli sentiment among them.

Those steps, in turn, reflect the President’s decision to upend the longstanding U.S. assumption behind Israeli-Palestinian peacemaking: that Washington must position itself as an “honest broker” between Israel’s government and the Palestinian Authority, which runs the West Bank. While moving closer to Jerusalem, Washington is pushing the Palestinian Authority to denounce anti-Israeli terror in unimpeachable terms, recognize Israel as a Jewish state, and negotiate accordingly.

Though U.S. failure on the Israeli-Palestinian conflict may justify a course correction, Trump’s unilateral change of direction is creating another chasm between Washington and its European allies. That chasm will grow far wider, however, if Corbyn’s Labour Party capitalizes on growing discontent with Prime Minister Theresa May and seizes power from her Conservative Party.

Even when he’s seeking to tamp down widespread concerns over the anti-Semitism that he exudes and that pervades his party, Corbyn finds new ways to confirm his deep hostility to Israel and Jews. (That hostility has prompted an astonishing two-fifths of Britain’s Jews to say that they would “seriously consider” leaving the country if Labour takes over.)

When, for instance, the Labour Party’s National Executive Committee last week adopted the International Holocaust Remembrance Alliance’s definition of anti-Semitism, Corbyn couldn’t help but convince the committee also to approve a statement declaring that it shouldn’t “be regarded as anti-Semitic to describe Israel, its policies or the circumstances around its foundation as racist.”

For Labour’s leader, that’s par for a very long course. Among his more notorious acts toward Jews and Israel, he has referred to the Jew-hating genocidal terrorists of Hezbollah and Hamas as his “friends;” called Britain’s labeling of Hamas as a terrorist organization a “big, big historical mistake,” laid a wreath at the grave of a Palestinian terrorist involved with the massacre of Israeli athletes at the 1972 Olympics, consorted with Holocaust deniers, and defended an anti-Semitic mural.

If Britain opts for Corbyn, he and Trump will clash mightily over Israel, further shaking the global order.

Image: Israeli kids play next to an Israeli flag next to the Israeli Syrian border at the Israeli-occupied Golan Heights, Israel July 23, 2018. REUTERS/Ronen Zvulun