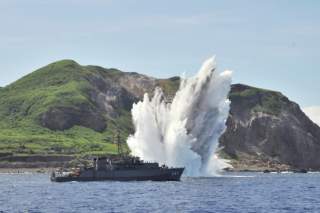 Editor’s note: The following is a translation of Chapter 7 of the book If the U.S. and China Go to War《假如中美开战》 by the author and analyst Chen Pokong. The current volume was published in Chinese in 2013 and was later translated to Japanese. It presents a range of potential conflict scenarios between China and the United States, including what may trigger conflict, and what the order of events may be.

Chapter 7 of the book presents a hypothetical scenario involving “Brother Choy,” an eager Chinese patriot based in Hong Kong, and shows how the activism of groups like this around the Senkaku Islands might easily lead to a conflict that quickly spirals out of control. With continued tensions in the region, the chapter makes for sobering reading.

For a time, there was tranquility around the Senkaku Islands—Chinese maritime police boats or surveillance aircraft were nowhere to be found. The serenity persisted for several months. During this period, Chinese media carried articles by scholars urging a maintenance of good relations between China and Japan, and a cooling of tensions. Chinese government officials also adopted a milder stance when discussing Sino-Japanese relations in public.

Worries in the Japanese public about a potential Sino-Japanese conflict gradually dissipated and the general mood was one of overflowing optimism. To improve Sino-Japanese relations, the Japanese government even ordered that the Japan Self-Defense Forces (JSDF) cut exercises and activity in the vicinity of the Senkaku Islands, or Diaoyu Islands to the Chinese.

Out of the blue one day, Brother Choy, the head of the Action Committee for Defending the Diaoyu Islands in Hong Kong, received a message from Old Fa, his Senkaku Islands protest counterpart on the mainland. Old Fa suggested that the Senkaku groups in Hong Kong and Taiwan once again get into fishing boats, form a joint expedition, and start protests afresh. Although Old Fa is a recent member of the World Chinese Senkaku Island Alliance, he is rather active and firm in his convictions.

Brother Choy hesitated. In the past, whenever he invited the mainland Senkaku Islands activists to protests, they would never show up because Chinese public security officials would get to them first. Hong Kong activists always ended up doing one-man shows. “This time, it’s going to be different,” Old Fa assured Brother Choy. “Circumstances have changed; we will definitely set out to sea!” Upon hearing that, Brother Cai was heartened, but felt apprehensive—after all, when Chinese and Japanese authorities were bickering over the Senkaku Islands, he didn’t consider protesting. But recently, China and Japan appeared to be cooling off over the issue. “The Chinese Communist Party can’t be relied on,” he fumed.

Brother Choy discussed the matter of going to sea with other Hong Kong activists and their Taiwan counterparts, later regained his enthusiasm for action and prepared to take to the seas.

One evening, eleven Hong Kong activists boarded the Xianfeng Number 1 and left Tsim Sha Tsui harbor. They successfully evaded the Hong Kong coast guard and made their way into international waters. The next morning, they rendezvoused with Old Fa and his three vessels at the waters near Guangdong Shanwei. They discovered that the Taiwanese weren’t able to meet up with them as they couldn’t get past coastal patrol. After some discussion, the Hong Kong and mainland Chinese activists decided not to wait for the Taiwanese, but instead make for the Senkaku Islands at midnight.

Old Fa had twenty-four people with him on the Minjinyu 1840, Zhexiangyu 1894 and Yueshanyu 1949. Because there were four boats in total, the superstitious Brother Choy (the number four sounds inauspiciously like Chinese for “death”) felt apprehensive and uneasy. Brother Choy would later maintain some distance between his vessel and the mainland boats.

At about 8 a.m., the activists glimpsed the Senkaku Islands through the fog at sea. When they were five nautical miles away, the Japanese patrol boats closed in. The Chinese boats stayed their course but at reduced speed. The Japanese boats herded them in and starved off space as the mainland Chinese boats tried to break the encirclement.

Soon, the Japanese patrol boats were firing their water cannons at the protest boats. Brother Choy was soaked wet and his boat rocked violently. Suddenly, the Hong Kong fishing boat was rammed by a Japanese patrol boat, and Brother Choy slipped on the slippery deck. Two hands pinned him down as he tried to get up to his feet; a Japanese security team had boarded the fishing boat, handcuffed the crew and frog-marched them on board their patrol boat.

The three mainland fishing boats met with the same fate. After a thirty-minute struggle, all Chinese Senkaku Islands activists were arrested and held in custody on the Japanese patrol boats.

Just before the Japanese patrol boat carrying Brother Choy and company was about to set off, one of Choy’s colleagues yelled for him to look behind—several miles back, the masts and boat hulls of what looked like fishing boats could be discerned through the fog. Were they Japanese? Or Chinese? They looked more like the latter.

Brother Choy was both delighted and alarmed—was this a good or bad turn of events? As the boats—big and small, and traveling in close formation—drew nearer, they turned out to indeed be Chinese vessels—were there ten? A hundred? A thousand? No one could say for sure.

Panicking at the new development, the twelve Japanese patrol boats started to break formation. Some Japanese security officials started radioing their superiors for instructions, while others hailed the rapidly approaching Chinese fishing boats, requesting that they immediately retreat.

The Chinese boats ignored the hailing and stayed on course. Some of these vessels even picked up speed. As the Japanese patrol boats readjusted their formation and prepared to intercept, the Japanese security officials received word from their superiors that about a dozen Chinese maritime authority and police ships were following the newly arrived Chinese fishing boats.

During the bustle, some of these Chinese fishing vessels managed to break the Japanese patrol boat blockade and landed on the Senkaku Islands. The manner in which the “fishermen” moved suggested that they had received military training.

How could Brother Choy know that the placid state of affairs between the Japanese and the Chinese was but a smokescreen for a larger conspiracy?

As more and more Chinese “fishermen” streamed onto the Senkaku islands, the Japanese security personnel fired warning shots into the air. Later, Chinese would authorities accuse the Japanese of firing the first shots in the coming conflict.

Upon hearing the warning shots, the hundreds of Chinese “fishermen” on Senkaku whipped out pistols and submachine guns, and opened fire on the Japanese security detail who landed on the island, killing all of them and turning the clear, cerulean waters and sands blood red. The “fishermen” then raised several red Chinese flags. Brother Choy, who watched the entire incident in a daze, didn’t know whether to feel angry or afraid.

Soon, fighter jets could be heard screaming through the air, and muffled explosions echoed across the water. Brother Choy knew that the Chinese and Japanese were engaging each other in the air and at sea; although he knew that he should be excited at this turn of events, he couldn’t help feeling that matters had escalated. As the Japanese patrol boats carrying the Hong Kong and mainland activists sped away from the Senkaku Islands, Brother Choy, not wanting to contemplate the present reality, closed his eyes.

In the name of “protecting and defending Chinese citizens,” the Chinese government started an invasion of the Senkaku Islands. A new Sino-Japanese war had erupted.

The conflict persisted for over two months. The Chinese deployed the East Sea Fleet, the North Sea Fleet and the air force, while keeping South Sea Fleet in reserve. The Japanese deployed virtually the entire Japan Maritime and Air Self-Defense Forces. To support Japan, the United States deployed the United States Forces Japan, the Seventh Fleet in the Pacific and parts of the Third Fleet. Russia sent its Pacific Fleet near Japan as a symbolic warning force.