The Impact of Great Power Competition on the U.S. Navy 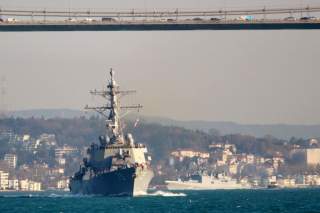 A state’s defense industrial base is the foundation of its capacity to generate and sustain military power. In few areas is this more salient than naval power, which entails shipbuilding, a costly, lengthy, and resource-intensive process. At a recent Center for the National Interest event, two leading authorities, with direct naval budgeting and force structure planning experience, laid out a strong case for why and how resources should be devoted to sustaining American naval preeminence in the coming decades.

“It is a big deal whether we maintain U.S. Naval Preeminence or not,” began former Virginia Representative Randy Forbes, who was in office from 2001–2017. Forbes was also a former chairman of the House Committee on Armed Services’ Subcommittee on Seapower, and is currently a senior distinguished fellow at the U.S. Naval War College. Since Trafalgar, Anglo-Saxon command of the seas has facilitated the free flow of trade and commerce, and the rule of law across the maritime commons, which not coincidentally, has paralleled the greatest period of economic growth and technological development in human history.

“If we lose that preeminence it’s not some tennis game that I jump over the net afterwards, shake hands and we start all over again. Literally, there could be a change in whether that rule of law applies or not,” warned Forbes. As a result, Forbes is adamant that shipbuilding, as a foundation of U.S. sea power, is “not a Republican or Democratic issue,” but an American issue.

“Shipbuilding is critical to naval preeminence,” but “we can’t build ourselves into naval preeminence,” said Forbes. To address this difficulty, he says the United States needs to think strategically about how to maintain its naval edge, including making astute decisions on what ships to construct and leveraging ties with allies. A key element of this, which Forbes repeatedly suggested that U.S. strategists need to improve at, is communicating to Congress and the American people, why we need a certain number of ships to accomplish the ends laid out in U.S. strategy. In other words, strategists must connect the ways, means and ends for policymakers and the public.

America’s national security strategy prioritizes competition with great power rivals, China and Russia. Retired U.S. Marine Corps Colonel Mark Cancian, a senior adviser with the CSIS International Security Program and former chief of the Force Structure and Investment Division at the Office of Management and Budget, explained that there are four elements of the Navy’s focus on high-end, major power conflict.

The first element is reduced emphasis on aircraft carriers, which is evidenced by the Navy’s recently announced plans to retire the USS Harry S. Truman decades early. Carriers are, per Cancian, “too few, too expensive and too vulnerable for a high-end fight.”

The second element is a push to increase the Navy’s arsenal of long-range precision munitions, which are critical to penetrating Chinese near seas and Russian coastal defense peripheries. However, munitions build-ups are hampered by “maxed out production lines.”

The third element is enhancing undersea warfare capabilities through increased submarine production. However, this is another area where demand outstrips shipbuilding capacity. For instance, the new Columbia Class ballistic missile submarine (the Ohio-class replacement) is competing for limited shipyard space with sorely-needed nuclear attack submarines.

Finally, the fourth element is unmanned systems. Deploying these emerging technologies is critical to assess and use the potential capabilities they can bring to the force.

Despite Washington’s renewed focus on major-power competition, a dilemma for the Navy is that in contrast to its Chinese and Russian rivals, which can focus overwhelmingly on their littoral peripheries, the U.S. fleet is called on to perform a broad range of global missions. Current shipbuilding plans must address this array of mission sets, because per Cancian, “The navy you design depends on what you want the navy to do.” A navy “focused on build-ups, great power conflict, and breaking [Chinese or Russian A2/AD bubbles]” would not require many carriers, and might focus on building only smaller carriers. However, a navy like the U.S. force that is engaged in a “full spectrum of missions…great power conflicts, regional conflicts, allied engagement, crisis response, and humanitarian assistance” would require many carriers.

As U.S. strategy increasingly emphasizes competition with China and Russia, the Navy like the rest of the military is, said Cancian, “caught in this tension between performing day-to-day operations and maintaining readiness for major power war.” Cancian observed that “on the one hand, you have a strategy that is focusing on high-end conflict with great powers. On the other hand, you have the [executive branch] and regional commanders asking for forward presence, for crisis response, for supporting ongoing conflicts in the Middle East, etc.” Sustaining simultaneous focuses on performing these day-to-day operations, while maintaining readiness for high-end conflict is possible with high defense spending, but tradeoffs become more severe during periods of budgetary constraint.

The event’s moderator, retired U.S. Marine Corps Gen. Wallace Gregson and the center’s director of China and Pacific studies, remarked at the discussion’s outset that it is often said that “the clearest statement of strategy is a budget where we have to allocate limited means to virtually unlimited demands.” Shipbuilding is particularly challenging because of the advanced planning and extended construction processes it entails. Per Gregson, planners “have to balance current capability versus future investment, balance force readiness and maintenance versus forward presence and reassurance; and your making bets on the effects of technology on combat.”

According to Forbes, the annual shipbuilding plan that the Secretary of Navy submits to Congress, while sometimes derided as largely aspirational, is useful for appropriators. The shipbuilding plan is important because it is akin to “taking the vital statistics of where the navy is . . . it tells you the direction the Navy is going, and it tells you where the navy is at that particular point in time. That’s why it’s so important because it forces the Navy to ask questions they might otherwise not have asked.”

The Navy’s growing focus on “‘distributed lethality’—dispersing combat firepower across surface ships rather than concentrating it on naval aviation platforms” casts doubt on the role of carriers, and other ships with primarily expeditionary and power projection roles (e.g., the Navy’s flotilla of various amphibious ships). However, it may also prompt the Navy to build more small surface combatants such as frigates and corvettes that America’s European NATO allies excel at building. Both Forbes and Cancian contended that the best way to leverage allied proficiency in smaller surface combatant construction is through partnerships, which have the added benefit of reducing costs through burden-sharing, and preserving the U.S. defense industrial base while using a foreign design.

The return of great power naval competition raises many questions for U.S. shipbuilding that navalists will spiritedly debate in the years to come. How big a force do we need, and by extension is the Trump administration’s goal of a 355-ship Navy on target? What kind of ships best serve our needs? What is the proper balance between sea control and power projection? What is the right balance between performing day-to-day operations and maintaining warfighting readiness? Should we build new ships, or focus on extending the lives of the older vessels in the fleet? However, one issue that is not up for debate is that the future of American power is deeply intertwined with the will and capacity of the United States to maintain its naval preeminence.