The Importance of Maurice R. Greenberg 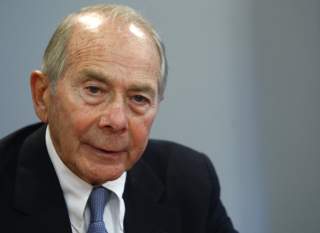 In recent weeks, the Center for the National Interest has been targeted by the news media as being overly friendly to Russia. Nothing could be further from the truth. What these articles ignore is the important role of the Center in fostering a better understanding of our critical international relationships and foreign policy challenges around the globe—and Maurice R. “Hank” Greenberg’s leadership role in making it happen.

After the end of the Cold War, Richard M. Nixon began thinking about establishing a think-tank that would break with the conventional Washington mold. He laid out his plan at a small dinner in the early 1990s with Greenberg and several other businessmen and foreign policy leaders.

Nixon was concerned that while America had won the Cold War, it could well lose the peace in the aftermath unless thoughtful stabilizing policies were developed. For a man who had dedicated much of his career to international relations, including such landmark accomplishments as creating the openings to China and Russia in the early 1970s, this was an unacceptable outcome.

Nixon wanted Hank Greenberg to serve as chairman of the new organization. Nixon was impressed by Greenberg’s ability to combine his business acumen with a global strategic vision to advance our nation’s security. Nixon and Greenberg became friends after the president left office and settled back home in New Jersey. They met frequently for lunch or dinner, and on several occasions Nixon spoke with the board of AIG—the company that Greenberg built—about global affairs and the impact on multinational businesses like AIG. Nixon’s knowledge of international affairs was extraordinary. According to Hank, the former president’s involvement was a great learning experience for him and for everyone else on the board.

Greenberg and others became supporters of a new think-tank called the Nixon Center for Peace and Freedom in 1994. Throughout, Henry Kissinger has served as honorary chairman. The aim was to promote the strategic realist perspective in American foreign policy, balancing diplomacy with a strong national defense in pursuit of our nation’s interest.

Dimitri K. Simes, who had served as an informal adviser to Nixon during his post–presidential career and accompanied him on trips to Russia and Eastern Europe, became the Center’s president. At the time, Dimitri was a senior fellow at the Carnegie Endowment for International Peace conducting a study group on national security to support Nixon, who was taking an increasingly active and public role in reaching out to Russia and offering counsel to Presidents George H. W. Bush and Bill Clinton.

Greenberg served as chairman of the board of the Center for over a quarter century. Honoring a promise that he personally made to Nixon, he provided critical financial support to the Center to ensure it became a leading bipartisan voice in American foreign policy discussions and debate. His long experience in building international businesses and assessing risk as well his moral example helped him deftly guide the organization. He also played a key role in helping the Center to establish its independence from the Nixon Foundation in 2011.

In 2014, Greenberg informed Simes and the board that he would be stepping down as chairman and that the Center needed to expand its base of financial supporters, which it has done. Greenberg continues to serve on the board but has handed over direct chairman responsibilities to me.

Numerous accomplishments took place at the Center during Greenberg’s leadership of the board. Our think tank predicted early on that Russia would likely take on an authoritarian cast and that bringing it into the G-8 in the hopes of transforming it into a democratic nation was utterly unrealistic. Another early and very prescient report forecast that China would move first to achieve dominance in its region and then drive to become a true superpower.

In the midst of today’s heated debates in Washington, the principles that the Center stands for are needed now more than ever. Our most difficult global relationships are also some of our most important ones. Applying realistic, practical solutions to solve those challenges is our best way to advance America’s interests on the global stage and make the world a safer place. No one has been a stronger or more consistent advocate of such an approach than Hank Greenberg.

Air Force Gen. Charles G. Boyd (retired) is the chairman of the Board of Directors at the Center for the National Interest.