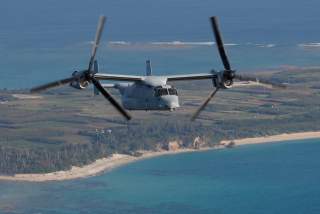 Americans and Japanese have long debated the utility of America’s permanent military presence in the island prefecture of Okinawa, which hosts roughly half of the 54,000 American troops stationed in Japan. This debate has resurfaced with the election of Okinawa’s new governor, Denny Tamaki, who strongly opposes the current plan to relocate America’s Marine Corps Air Station Futenma from the urban center of Ginowan City to the Henoko Bay area, instead advocating for the complete removal of the base. Tamaki, himself the son of an American serviceman, recently traveled to America to make his case for reducing the American military presence in Okinawa and the specific removal of U.S. Marines from the prefecture. Many have previously called for the U.S. military to leave the island altogether.

While America has far too many military bases which have become redundant, costly and counterproductive to America’s national interests, the bases in Okinawa remain a vital component of America’s grand strategy in East Asia. The American military presence on the island, and specifically U.S. Marines, play an important role in establishing American power projection in a critically important region that is home to roughly 60 percent of the global population. Still, in the interest of preserving the long-term sustainability of the American presence in Okinawa, the United States should work with the local government to better address the valid complaints of the Japanese people regarding the role of the American military in Okinawa.

Okinawa’s strategic location between the Philippine, East China and South China Seas makes it an important military outpost to preserve free navigation and protect American security interests in the region. Okinawa’s close proximity to China, Taiwan, the Korean Peninsula and mainland Japan allows the marines stationed there to serve as a flexible rapid-response force to confront any challenges that should emerge. The marines at Okinawa are, according to the former commander of the Marine Corps Forces Pacific Lieutenant General Keith J. Stalder, always “a day’s transit time to either a U.S. defense treaty ally, a threat to regional stability, or a perennial disaster relief location.” Okinawa functionally serves as an ideal launching point from which the United States can easily conduct military operations in defense of its interests and those of allies like Japan, including deploying the marines from Futenma or air force fighters from Kadena Air Base to attack targets throughout the region.

The Okinawa bases’ geostrategic flexibility perfectly positions the United States to counter a wide range of potential threats. Okinawa is viewed as a critical component of America’s strategy to limit Chinese aggression in East Asia due to its close proximity to both Taiwan and the Senkaku Islands, the latter of which China has a disputed claim with Japan regarding the islands’ ownership. Should China threaten Taiwan, attempt to limit freedom of navigation in the East or South China Seas, or make an overt move to claim the Senkaku Islands, troops in Okinawa would be a critical component of an American military response, and their presence on the island serves as a deterrent to prevent such provocations from the Chinese.

America’s presence in Okinawa is also a critical component of its strategy to preserve peace on the Korean Peninsula. American marines play an integral role in Operations Plan 5027 (the U.S.-South Korean response plan to a potential North Korean invasion), and the former commander of U.S. Forces Korea General Burwell Bell concluded that “when the North Koreans consider the potential for the United States Marines to interdict their logistics sites and fragile supply lines deep in their rear areas, the likelihood of the North seriously considering a sustained ground offensive drops drastically.” Furthermore, Okinawa would become even more important should the United States ever decide to end or reduce its military presence in South Korea, something President Donald Trump has seriously considered.

Perhaps most importantly, America’s military remains heavily invested in Okinawa as a means of assisting Japan in its national defense, an obligation assumed by the United States upon signing the Security Treaty with Japan in 1960. Despite ending its ban on collective self-defense in 2014, Japan remains legally constrained to deploying its Self-Defense Force only when the safety of Japan itself is threatened and all diplomatic options have been completely exhausted. The Japanese military also suffers from numerous shortcomings even after its efforts at modernization in recent years. America’s robust military presence in Okinawa (74 percent of America’s military facilities in Japan are located there) significantly bolsters Japan’s defensive posture, facilitates cooperation between the two militaries, and sends a clear signal to other regional actors about America’s commitment to defending key allies from outside aggression.

While America’s presence in Okinawa is incredibly important to Japan’s security, many of the criticisms of the bases put forward by the island’s inhabitants have a great deal of merit. American bases occupy nearly one-fifth of Okinawa’s landmass and residents have suffered through years of noise pollution, multiple accidents involving military aircraft in civilian areas and at least 270 environmental accidents on marine bases between 2002-2017. Okinawan critics of the bases also rightly point to the sexual assaults committed by American servicemen which have eroded the public’s confidence in the military. Although America’s decision to relocate its marine air base from Futenma to Henoko Bay was expected to alleviate many of these complaints, some residents contend that the relocation simply shifts the problems to another part of the island, and the election of Tamaki as governor shows that local resentment against the American military has continued unabated.

America’s bases in Okinawa remain extremely important to its security objectives in East Asia and maintaining a solid relationship with the residents of the island is essential to ensure its long-term presence there. The United States must, therefore, engage in robust public diplomacy designed to improve relations between the military, the Japanese government and the prefecture of Okinawa. This diplomacy should not only make a compelling case for the importance of the American bases but should also establish a more effective dialogue between the three parties about the best strategies to address future issues that arise between the U.S. military and the local government.

The United States could further improve its community relations by exploring opportunities for expanding its popular educational outreach programs in the prefecture. Likewise, Washington should embrace the proposal for the U.S. military to share its medical data with a new Okinawa Health Medical Innovation Center (OHMIC) at the new Ryukyu University Hospital being constructed on the recently returned property near the current Futenma facility and the new U.S. Naval Hospital. The latter proposal would provide opportunities to enhance the quality of healthcare for Okinawa, Japan and Asia. When returned, the current Futenma property can be the site for world-class medical research, education and treatment center.

Okinawa is the most challenged prefecture in Japan. The nature of this emerging health and medical innovation enterprise will provide the needed professional, business and educational incentives to energize development and prosperity for the island’s growing population. This will not only help strengthen Okinawa’s economic future but would also publicly signify America’s investment in its long-term growth and prosperity.

Additionally, the United States must work to thoroughly address the concerns Okinawans have with its presence on the island. Such steps should include a full review of the ecological impact of its bases to develop strategies to minimize the military’s environmental footprint. Additionally, the U.S. military should accept greater public accountability for preventing sexual violence committed by its servicemembers coupled with a sustained commitment to ensuring that such offenses are adequately punished, which has historically occurred far too infrequently. The American military must show residents that its commitment to Okinawa extends beyond the preservation of collective self-defense and encompasses the safety of the community as a whole.

Finally, America should consolidate its military footprint on Okinawa by proposing to share all military bases with Japanese forces, thereby reducing the amount of land in Japan, including Okinawa, occupied by both militaries. The United States already shares military bases with Japan at Air Station Iwakuni and Misawa Air Base, and Japanese troops currently live and train at America’s Camp Hansen in Okinawa, even deploying from Camp Hansen alongside their American counterparts. A greater degree of base sharing would not only minimize the American military’s footprint in Okinawa but would also strengthen the U.S.-Japan alliance by building strong relationships between American and Japanese personnel and increasing their capacity to operate and coordinate effectively in the field.

The United States must remain in Okinawa despite local opposition; American military installations on the island prefecture are essential to ensuring both American and Japanese interests in the critically important region of East Asia. However, the United States must actively seek to improve its relations with the people of Okinawa through a sustained commitment to public diplomacy and civic responsibility within the community. The U.S.-Japan alliance remains a lynchpin for ensuring security in East Asia and establishing a more sustainable American presence in Okinawa will be a critical step in strengthening this alliance in the years to come.