Inappropriate but Not Impeachable: The GOP Senate Republican Strategy for a Trial of Trump? 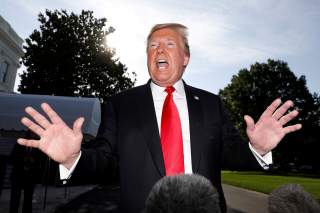 As the Democratic-controlled House of Representatives finally took the decisive step of voting to advance its impeachment inquiry, for President Donald Trump there is good news and bad news.

First, the bad news: The House Democrats’ strategy of avoiding cartoonish public hearings, interviewing witnesses behind closed doors in a manner reminiscent of a grand jury, and leaking what they want to the media without releasing full transcripts has been working. Public opinion on impeaching and removing the president is moving in a seemingly enduring way for the first time.

A CNN poll earlier in October found that 51 percent wanted Congress to boot Trump compared to 44 percent who did not. More recently, Economist/YouGov had respondents 49–43 in favor of impeachment, similar to the Politico/Morning Consult 48-43 result. Overall, “Yes/Remove” has a nearly 3-point edge in the RealClearPolitics polling average as independents shift in a pro-impeachment direction.

The polls aren’t quite unanimous on this question and when you delve deeper into the numbers, impeachment remains a risky proposition for both parties. We are also still far from a pro-impeachment consensus strong enough to force swing-state Republican senators’ hands; the GOP base is still firmly behind Trump. But impeachment has gone from being broadly unpopular outside Democratic voters to something on which the country is at a minimum divided. Independents are becoming before supportive of the House Democrats’ efforts and people who disapprove of Trump’s job performance are increasingly willing to see the Senate remove him from office.

That last fact could move the needle, however slightly, against the president. Even if it does not, it could make it harder for him to win back Trump disapprovers in the election—if you become hardened in favor of removing Trump via the impeachment process, it may follow that you will also be more willing to remove him via the ballot box even if he is ultimately acquitted.

Trump’s own behavior and that of subordinates, like embattled White House chief of staff Mick Mulvaney, has played a role here. But the Democrats also learned from the failure of special counsel Robert Mueller’s investigation that it is helpful to control the narrative. Attorney General William Barr made Mueller’s inability to prove a criminal conspiracy between Russia and Trump’s associates public knowledge first, the fuller report—which painted a more complicated picture— later.

This time around, we get to read diplomat William Taylor’s “explosive” opening statement first without any public information about how it held up against Republican questioning (though some of that also leaked later). Reports about National Security Council official Tim Morrison’s testimony showed Republicans can play the leaking game, too, but the process has allowed damning information to circulate largely unrebutted outside of conservative media outlets the voters who are persuadable on these points largely don’t read. While that won’t last forever, perceptions could be baked in by the time Republicans get to so much as muddy the waters during a House vote on articles of impeachment or a Senate trial.

The good news for Republicans is that their arguments against this process have been effective enough that the Democrats may, at least to some extent, change course, though it remains to be seen how much. GOP lawmakers barging into closed-door sessions and complaining about House Intelligence Committee Chairman Adam Schiff made transparency enough of an issue that Democrats are now saying there will be some public hearings. While this was effective at reducing public support for Richard Nixon during Watergate, the electorate is more polarized, the media environment more diverse, and there is simply less trust in institutions like Congress to be engaging in anything but partisan attacks against members of the opposing party.

The House Judiciary Committee’s attempted interrogation of former Trump campaign manager Corey Lewandowski went badly. That is one reason the panel’s chairman, Jerry Nadler, hasn’t been running the show up to this point. Another is the fact that Nadler, like Sen. Lindsey Graham on the other side of the aisle, was seen making a set of public arguments during the impeachment of President Bill Clinton that are not convenient right now. These problems will be harder to avoid in the next phase of impeachment.

As long as the impeachment inquiry remains focused on Ukraine, the affair begins to resemble the Clinton saga: the facts of the underlying behavior are largely known, and the two parties merely disagree about whether they are impeachable. That could change if the scope of the investigation broadens or Rudy Giuliani’s legal situation deteriorates, imperiling the president. But until then, this is a debate over whether delaying but not ultimately denying aid to Ukraine and seeking an investigation into the Bidens must necessarily entail corrupt intent. Republicans have an argument here, even if they can’t dismiss this as a prurient focus on a private matter as Democrats did under Clinton.

This is where the good news ends, however: Trump is going to desire a more full-throated defense of his call with Ukraine’s president than many Republicans, especially those serving in the Senate, are going to be willing to muster. “Inappropriate but not impeachable” is going to be the standard Republican line and that is not going to be good enough for Trump.  A rift between Trump and Senate Republicans would truly endanger his presidency, even though getting twenty GOP senators to vote to remove him in an election year is a heavy lift. Trump is more volatile, and Republicans are more timid than their Democratic counterparts two decades ago.