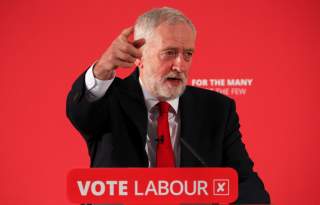 If Britain is now on a track that may see its democracy endangered, an outbreak of carelessness, complacency and quite astounding stupidity in the summer of 2015 will bear much of the blame. In the general election held in May that year, David Cameron, a Conservative who had led a coalition government for five years, won the Tories a surprising absolute majority. It was not large, but it meant he could not use the excuse of coalition to renege on his promise of a referendum on the UK’s membership of the EU.

That was a drama for later. What mattered that summer was that Labour leader Ed Miliband had stood down. His successor was a bolt from the red: Jeremy Corbyn, an extreme (in all senses of the word) representative of what Orwell called that “dreary tribe of…sandal-wearers and bearded fruit-juice drinkers who come flocking towards the smell of ‘progress’ like bluebottles to a dead cat.” Naturally, the bearded Corbyn has been spotted in sandals, and drinks very little or, possibly, no alcohol (“my secret is apple juice or coconut water”).

But back to Miliband: the most interesting thing about him is that he was ruthless enough to beat his brother David, a former foreign minister and the favorite for the job, in the previous contest for the Labour leadership. Nevertheless, he was a consequential leader in two key respects. The first was the mere fact of his election. ‘Red Ed’s’ Caining of his more Blairite brother accelerated Labour’s move away from the legacy of its electorally most successful prime minister.

The second was yet another change (there have been many) in the rules for choosing Labour’s leader. The story is too ornate to go into here, but it would be a shame not to mention that a brawl in a House of Commons bar serves as its prologue. Its conclusion was the replacement of Labour’s electoral college with a “one member, one vote” electorate. This was made up of party members, members of affiliated trade unions who registered as supporters and a new category of ‘supporting members’ who could effectively buy a vote in exchange for a payment of three pounds—the price, one Labour mp noted, of the ‘meal deal’ at one British supermarket chain. The sole recognition that the UK is a parliamentary democracy was the requirement that this ‘selectorate’ could only choose a candidate nominated by at least 15 percent of Labour’s parliamentary party—a hurdle supposed to weed out the wild men, a category into which Corbyn most certainly fell.

He was a thirty-two-year parliamentary veteran who few Labour parliamentarians seemed to like—and even fewer agreed with. Over the years, he had defied his party whips more than four hundred times. He had been the most rebellious Labour MP throughout the three Blair governments. His views may have been poisonous, but he stood by them.

When Corbyn announced he was going to run for the leadership, Britain’s bookies rated him a 100-to-1 outsider. Between them, Blairites, post-Blairites and the soft left accounted for the vast majority of the parliamentary Labour Party. Corbyn should not have been able to find that 15 percent. He had demonstrated the lack of regard he felt for parliament for decades, perhaps most notoriously by inviting two convicted Irish Republican Army (IRA) terrorists for a meeting there shortly after the murderous IRA bombing of the Grand Hotel in Brighton in 1984, an attempted assassination of Prime Minister Margaret Thatcher and much of her cabinet. Over three decades later, he used the Palace of Westminster to host “our friends from Hezbollah.” “Unfortunately,” the Israelis—dark stars of Corbyn’s demonology—had stopped “friends from Hamas” from making the trek to London.

As his fellow MPs knew, Corbyn, an apologist for Castro, Chavez and other tyrants, has never had much affection for parliamentary democracy. However good a constituency MP he was (very), however grandfatherly he might now look, however (usually) mild his demeanor, Corbyn’s politics were still characterized by an adolescent’s anger, an adolescent’s certainty of his own rectitude and convictions disturbingly unchanged since his brief stint at the equivalent of a community college in the early 1970s.

Sure enough, the early indications were that Corbyn would fall some way short of securing the necessary nominations, despite the arrival of a number of new Hard-Left Labour MPs into parliament (more evidence that the Blairite tide had receded). However, partly thanks to social media pressure—a vital element in Corbyn’s rise and subsequent ascendancy—some MPs ‘lent’ Corbyn their nominations. Others did likewise in the hope of earning credibility with the Left, others because they wanted to drag the debate leftwards, and still others out of misplaced charity.

Some of those lenders might have been lulled both by the passing of time—the Hard Left’s last serious attempt to take over Labour had been over thirty years ago—and a sentimental attachment to the purs et durs. The comrades might be misguided relics from (it was believed with a confidence born during the Blair years) another age, but their hearts were supposedly in the right place.

Besides, even if he made it to the finals, there was no way that Corbyn could become leader. Really? The social media activity and unmistakable signs of enthusiasm for him at the grassroots level foreshadowed what was coming—and some in the party were already beginning to fret about the unpredictability of the new electoral system. Despite that—and despite Corbyn’s record—enough Labour MPs lent Corbyn their nominations to secure him a place (just) on the ballot paper.

Margaret Beckett, a former foreign minister (and more), subsequently described those MPs who, like herself, had lent their nominations to Corbyn as “morons.” A year later, she was one of those Labour MPs who cast a vote of no confidence in Corbyn’s leadership. Too late.

When the nominations closed, there were four candidates; a keeper of Blair’s extinguished flame, someone somewhat to the left of her, someone quite a bit further left still, and, then, in the depths of left field, Corbyn. Within days, it became evident that those early stirrings on social media and within the constituencies had meant something. The delirious reception Corbyn was receiving on the stump—something that was never to fade, something his opponents could never match—was amplified on social media and echoed in the polls. Increasing numbers of people were joining the party or paying their three pounds. They were not doing so to throw their support behind the hapless Blairite (she ended up with a paltry 4.5 percent of the poll).

Traditionally the trade unions, a force for hard-nosed restraint—it’s complicated—might have been expected to pump the brakes. Not this time. Instead, many, including Unite, the largest, (and, not only that, the largest Labour donor) stepped on the gas. Its boss, Len McCluskey, endorsed Corbyn. Back in the 1980s, McCluskey had been a supporter of Militant, a Trotskyite group looking to infiltrate the Labour Party, but he never joined them. As he told the Liverpool Echo in 2009:

I decided that Militant was too sectarian from a political standpoint to be effective. But I believe that on the chief issues they were right.

He was playing a longer, smarter game. In 2010, McCluskey was a crucial figure in Miliband’s leadership victory, but soon ‘Red Len’ was attacking ‘Red Ed’ from the left: the game had much further to go, and, so in 2015, realized McCluskey, did Jeremy Corbyn.

By the time the polls closed, there was no doubt over the result. Corbyn won with 59.5 percent of the vote. Many Labour Party staffers, Blairite or something close to it, attending the announcement wore black, in mourning, they thought, for Labour. However, it was their Labour in the coffin—not the same thing at all.

And for all the talk that it was the hundred thousand or so “three pounders” that had handed Labour to Corbyn (84 percent voted for him), Corbyn also won a clear majority of trade union votes and a comfortable plurality (49.6 percent) of party members.

Many Conservatives were delighted: Labour was finished, a suicide. They ought to have smirked less and understood more. The excitement generated by the Corbyn campaign (excitement that translated into action: over a quarter of a million people voted for him) had not only pulled in over 100,000 three pounders (perhaps twenty times what had been originally expected), but also some 180,000 people had joined the party itself, roughly doubling its size. The Conservatives had around 130,000 members at that time. That gap continued to grow. By January 2018, Labour’s membership had grown to 552,000, while by March this year the Tories had shrunk to 118,000.

To be sure, Corbyn’s surge fed on itself in a way that transformed his rallies into a phenomenon that was cultural as well as political, lit celebrations not only of the would-be Labour leader, but also of those who would vote for him. This may have been one of those spasms of collective hysteria to which allegedly reserved Britons occasionally succumb, but ominously for the Conservatives, those include not only the keening for Diana but also the remarkable wave of public feeling that preceded and then accompanied Tony Blair’s first electoral landslide.