India’s Secular Democracy at the Crossroads 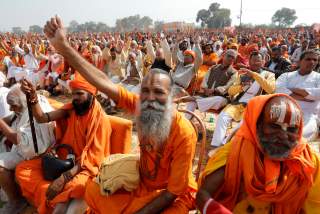 In recent years India has assumed considerable strategic importance in American policy toward the Indo-Pacific (formerly Asia-Pacific) region. This is the result of its growing economic and military capabilities and the perception in Washington that it can act as a balancer to China’s rising power in the region. India’s traditional democratic values that seem to be compatible with American principles also make it a desirable strategic partner. It is important, therefore, that the American policy community should be cognizant of developments in India that are likely to undermine its reputation as the world’s largest democracy and eventually erode its ideological compatibility with the United States.

India is literally at the crossroads with the very future of its secular democracy at stake. With five very important state elections in November and December, and national elections around the corner in the spring of 2019, the political temperature in India is at boiling point. Competitive Hindutva (majoritarian Hindu nationalism) has become the name of the game, with the ostensibly secular Congress party trying desperately to demonstrate its Hindu credentials to cut into the base of the ruling Hindu-nationalist BJP.

Rahul Gandhi, the president of the Congress and the great-grandson of India’s first prime minister, the ardently secular Jawaharlal Nehru, is busy visiting Hindu temples and publicizing his high caste Brahmin genealogy for electoral gains. One has a feeling that, in addition to electoral calculations, he is doing so out of a deep-seated sense of insecurity since his Brahmin antecedents are heavily diluted by the fact that his paternal grandfather was a Parsi (Zoroastrian) and his mother is a Catholic Christian. This is the first time since independence that the religion of a candidate for the job of prime minister is overtly portrayed as the defining basis for his claim to lead the country.

The Congress Party’s passive Hindutva will in all probability lead to its crushing defeat in the forthcoming national elections because, as a pale imitation of the BJP’s aggressive Hindutva, it cannot compete with the genuine article. This is the case among other things because Rahul Gandhi and his advisors are confusing contrived demonstrations of personal religiosity with Hindu nationalism. The latter is a clearly defined political ideology that, in direct contravention of the letter and spirit of the Indian constitution, is based on the notion that Hindus are the exclusive owners of the country and Muslims and Christians are interlopers who can be treated as second-class citizens at best. It owes its origins to Vinayak Damodar Savarkar, K.B. Hedgewar and M.S. Golwalkar, who were its founding fathers in the first half of the twentieth century, and not to the religious tenets of Hinduism.

The passive Hindutva strategy on the part of the Congress, based on the precept “if you cannot beat them then join them,” is ceding the ideological ground to the Hindu nationalists by diluting the tenets of secularism enshrined in the constitution. This is demonstrated by the fact that the well-established secular norm of not overtly using religion for electoral gains is a thing of the past, with leaders of both major parties and their affiliates engaging in religiously loaded rhetoric in a bid to outdo each other.

A very dangerous aspect of this unfolding drama is the escalation in the politics of intimidation, which is undermining the rule of law and further threatening the democratic fabric of India. The recent mobilization of hundreds of thousands of Hindu devotees in Ayodhya by the VHP, RSS, Shiv Sena and related Hindu nationalist organizations is the prime example of this phenomenon. It was done in order to put pressure on the government to build a Ram temple on the site of the Babri mosque demolished in 1992 by members of the same groups and is a clear demonstration of majoritarian muscle power. Equally important, it is a direct challenge to the power and role of the Supreme Court, the highest court in the land, where the matter is under adjudication thus undermining the principle of judicial independence, which is a cornerstone of the democratic political system.

Mohan Bhagwat, chief of the RSS, the parent organization of the ruling BJP, made clear in a speech during the rally in Ayodhya that “society,” as he termed it, could not wait any longer for the Supreme Court’s verdict. He demanded that the government issue an ordinance, regardless of the Court’s decision, sanctioning the building of the temple because it is a matter of faith that cannot be questioned in a court of law. He went on to declare that “society does not move only by the words of law, but also by its own wishes.” Other speakers indulged in even more intemperate language. What started as a property dispute has thus been turned into a matter of faith beyond the purview of the courts.

The chief executive of the largest Indian state Uttar Pradesh, himself a Hindu priest, has declared that he will build a statue in bronze of the Hindu god Ram in Ayodhya that will be the tallest statue in the world. A model of the statue, presumably to be paid for with public funds, has already been displayed on TV channels. There has not been a whimper of protest from the so-called secular parties in the country. It is clear that the goalpost of secularism has been radically shifted to the right in the past four years of BJP rule.

Simultaneously, there is an anti-democratic wave sweeping through the country. Populism, rather than liberal democracy, is increasingly coming to define the nature of the Indian polity. A jingoistic form of ultra-nationalism has become very popular with discussants on TV channels, some of them retired military officers, contributing in great measure to the legitimization of such rhetoric. This is the polar opposite of patriotism combined with liberal values that was enshrined in the Indian constitution, was the dominant political ideology at the time of the Indian Republic’s establishment, and was adhered to by the first generation of independent India’s leadership.

A further indication of the erosion of democratic values is the recent tendency of serving generals to comment publicly on sensitive issues of domestic and foreign policy. They thus intervene in debates, such as those regarding illegal immigration and India-Pakistan relations, that should be the exclusive preserve of civilian leaders in government and in opposition. This would not have been tolerated in an earlier era because the founding fathers of the republic were emphatic that civilian supremacy over the military brass must be safeguarded at all costs, and the military isolated from the political arena. This was best summed up in the dictum, “Generals should be seen resplendent in their uniforms but never heard in public.”

The current trajectory of Indian politics reminds one eerily of the first decade of neighboring Pakistan’s existence. Mounting majoritarianism fuelled by religious intolerance, hyper-nationalism borne out of insecurity, erosion of political institutions and creeping military intervention in the political arena finally led to the first military coup in Pakistan in 1958. This paved the way for a succession of military takeovers. One of these resulted in the division of the country in 1971, and another in the creation of terrorist outfits in the 1980s, that continue not only to threaten Pakistan’s neighbors but also to tear apart the country’s social fabric. Pakistan has never recovered from the tragic errors committed in its early years and is paying a very high price for it today. One hopes that India will not go down the same path because otherwise, the largest democracy in the world will face an equally bleak future.