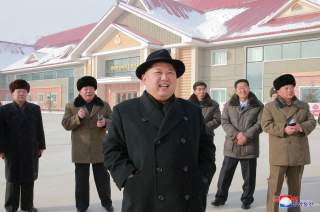 India’s recent revelation that it had sent a junior foreign minister to meet with counterparts in North Korea was greeted with surprise. According to V.K. Singh, India’s Minister of State for External Affairs, the two unlikely candidates came together to discuss "political, regional, economic, educational and cultural cooperation between the two countries." The two don’t seem to have many policy issues in common. Why, then, did India send a senior diplomat to Pyongyang for the first time in twenty years? While the motives of both actors are open to interpretation, it is useful to speculate how this visit fits into India’s broader strategic goals.

Eyes have been glued to the great power dynamics in the Indo-Pacific. Tensions on the Korean peninsula have drawn in several powers both within and outside the region. India has not directly been party to any of these, unsurprisingly. Non-alignment has long been a defining feature of India’s policy despite recent attempts to counter Chinese power endeavors. India is known to steer clear of any explicit alignments or alliances that would be binding and divergent to its non-committal stance. Meanwhile, North Korea, known as the ‘Hermit Kingdom,' has been built on foundations of Juche, or self-reliance. It has distanced itself from the rest of the world. From the perspective of Indian foreign policy elites, engaging with Pyongyang would be a calculated move—one that might support New Delhi’s great power ambitions. India could accomplish this by helping itself with alignments and by fostering its diplomatic role in the region.

There's no denying that, with Modi's election in 2014, India has noticeably been more active on the world stage. Essential ingredients of Modi's foreign policy have included hedging India's relationship with China, engaging more closely with Southeast Asia, and reaching out to great powers like the United States. Furthermore, a more famous example of engagement with Southeast Asia has included inviting ASEAN leaders to National Day celebrations. While India has the territory, population, and resources to achieve a more significant regional role, it lacks in its ability to create substantial political impact relative to its counterparts. For instance, similar Chinese actions are the most substantial threat to India's influence in its backyard and the wider Indo-Pacific region. Therefore, the New Great Game in the Indo-Pacific region between India and China has been the most prominent justification for India's desire to reach out and engage beyond its borders.

With the United States-North Korean Summit taking place earlier this month, the world is faced with the prospect of a newly-opening North Korea. In this shift, Delhi’s diplomacy can be seen as an effort to play the role of a mediator. It would be a step towards having a say in North Korea’s economic and political makeup, possibly tugging Pyongyang out of the Sino-Pakistani orbit that it currently is in. Given that North Korea’s two closest allies and trading partners happen to be India’s most immediate threats, good ties with Pyongyang would be an assurance of one less risk in the region. Therefore, from a realist perspective, India’s outreach to North Korea could be an opportunity to gain leverage over China and Pakistan—a step that might also boost India’s position in the Indo-Pacific.

As far as alignments are concerned, this tactic could even set the foundation for collaboration with the United States on the future of North Korea. In the past, India has served as a mediator in the Korean peninsula, offering humanitarian assistance and third-party intervention in the aftermath of the Korean War. The willingness to carry forth this role seven decades on, along with furthering other shared interests with America, would play into India's objectives against China's rise.

However, these might not be the only outcomes. In a world where soft power is increasingly essential, favorable links with Pyongyang would boost India's goodwill on the world stage. The present-day situation sees India not a party to East Asian tensions, yet also maintaining cordial relations with most states in that region. A parallel can be drawn to India during the Cold War period when it jointly pioneered the Non-Aligned Movement which enabled it to become a leader of weak, newly-decolonized states in the third bloc. A similar leadership role would uphold and reinforce its image as a neutral, peace-loving country, eventually allowing nations like North Korea to align closer to it.

While the situation in Pyongyang is still very volatile, India's tactics might well feed its broader ambitions of world power status. By playing mediator, it would be able to work on its alignments, possibly to counter Sino-Pakistani ties at its doorstep. By playing the role of a leader, it will strengthen its orbit of allies in the region. However, India must continue to work towards a coherent foreign policy strategy. This is because Indian foreign policy elites must direct their resources and know-how towards a uniform policy, should they wish for India to rise beyond the title of an ‘emerging power.' Otherwise, the lack of momentum in similar tactics might prevent Delhi from gaining any advantage over its counterparts.

Tanya Sen is a research assistant at the Asia Studies Centre, Henry Jackson Society. Her previous works have been published on ORF and RUSI. She is studying International Relations at King’s College London.

Image: North Korea's leader Kim Jong Un is seen during the inspection of a potato flour factory in this undated photo released by North Korea's Korean Central News Agency (KCNA) in Pyongyang December 6, 2017. KCNA/via REUTERS ATTENTION EDITORS - THIS PICTURE WAS PROVIDED BY A THIRD PARTY. REUTERS IS UNABLE TO INDEPENDENTLY VERIFY THE AUTHENTICITY, CONTENT, LOCATION OR DATE OF THIS IMAGE. NO THIRD PARTY SALES. SOUTH KOREA OUT. TPX IMAGES OF THE DAY