India and Pakistan Are Headed Towards a Crisis over Kashmir 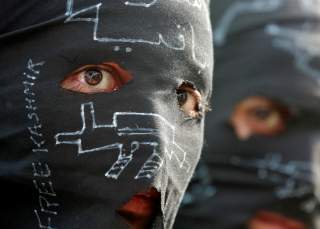 In August, Pakistani prime minister Imran Khan pledged that he would serve as an “ambassador” for the embattled people of Kashmir, who are besieged by close to a million Indian security forces. And on Friday, he did exactly that, using the world’s largest platform—the United Nations General Assembly— to voice their plight.

Khan excoriated Indian prime minister Narendra Modi and called on the world to prevent a potential “bloodbath” in the disputed territory, where for two months over nine hundred thousand Indian security personnel have imposed a curfew on the Muslim-majority populace. Thousands of civilians, along with hundreds of political leaders, have been arrested.

After Khan’s speech on Friday, Kashmiris took great risk to show their gratitude to the Pakistani leader, coming out on to the streets, setting off firecrackers, and calling for freedom from India. One Kashmiri man told Al Jazeera that he “felt solace” when Khan spoke, knowing that Kashmiris “are not alone.”

New Delhi’s annexation and siege of Kashmir will prove to be strategic blunders. Indian officials and the country’s compliant private media falsely claim that there is “normalcy” today in Kashmir. They also say that the region will see even greater development and investment tomorrow.

But Modi, his advisors, and even his sycophants in the Indian media are well-aware that he has planted the seeds of long-term unrest in Kashmir. They are well-aware that the change in Kashmir’s status is against the will of the Kashmiri people and their political leadership—even the increasingly discredited lot that has been pro-India. And that is why Kashmiris are caged in and more or less cut off from the world. And that is why their political leaders, who could organize protests, are in prison or under house arrest.

Permissive domestic and international environments will allow for New Delhi to continue the status quo for months. Congress has yet to hold a hearing on Kashmir. And the Trump administration has effectively endorsed India’s annexation and false promises of development.

In a briefing on Thursday, the top U.S. diplomat for South Asia, Alice Wells, indicated that she sees the annexation as a fait accompli, though the move is opposed by most Kashmiris and violates UN resolutions on Kashmir and the India-Pakistan 1972 Simla Agreement.

But the longer the siege goes on, the deeper the resentment of Kashmiris will grow and the more pressed they will become to physically confront India. India may hope that Kashmiris tire and wave the white flag, but they see the Indian threat, at least in political terms, as existential.

India can easily lift the siege immediately. But it knows that Kashmiris will take to the streets and protest against the annexation, giving the lie to Modi’s claim that Kashmiris welcome the move. The unilateral change in Kashmir’s status, the siege, the arrests, and the abuse have all deepened local support for Kashmiri independence.

India’s detention of Kashmiri leaders will continue for months, if not years, and may prevent sustained, organized protests—at least until Kashmiris adapt. New Delhi has sought to create a leadership vacuum in Kashmir and eventually fill it with a new set of political leaders who play within India’s updated red lines, including giving up on autonomy, let alone independence. But India’s political engineering campaign has progressed slowly. There are few takers at the moment for the role locals will see as being of an Indian stooge.

While New Delhi has created the leadership vacuum in occupied Kashmir it desired, that vacuum is now being filled by the prime minister of Pakistan, who was already well-known and revered in Kashmir.

In 1983, when India and the West Indies faced off in the first international cricket match in Indian-occupied Kashmir, the local Kashmiris booed the Indian team, shouted “Love Live Pakistan,” and held up posters of Imran Khan—then the captain of the Pakistani team. Today, as Kashmiris face great peril, that cricket star leads Pakistan the country and captains its diplomatic campaign for Kashmir.

The worsening human-rights situation in Kashmir, however, represents a challenge for Pakistan too. There are great expectations for Islamabad in Kashmir—expectations it may not be able to fulfill as its hands are tied.

Save for Malaysia and Turkey, Pakistan has not been able to muster diplomatic support for the Kashmiri cause. It remains capable and committed to deter India, but seeks to avoid escalation due to its own economic distress as well as the risk of a nuclearized conflict. Potential blacklisting by the Financial Action Task Force or FATF has also reduced Pakistan’s subconventional options. In September, Khan—quite bravely—warned Pakistanis not to go to Kashmir for jihad. Pakistan has long stood by the Kashmiris, but its support for terrorist groups like Lashkar-e Taiba has tarnished the legitimate Kashmiri cause and brought great harm to Kashmiri society.

So far, Khan’s diplomatic campaign has had an impact, albeit a modest one. It has brought the Malaysians, Turks, and perhaps even the Chinese on board, helped invigorate the activism of the Kashmiri and Pakistani diasporas, and provided his government with a window of opportunity to showcase to pro-violence constituencies that diplomacy can yield better results.

But the longer the siege goes on, more and more Kashmiri on both sides of the Line of Control will see that they will be left with no option but the path of violence. The very Kashmiri leaders who participated in Indian political system, the very leaders who served as chief ministers of the region India regarded as a “state,” are now in prison. And this is the ignominious fate of those who choose to take New Delhi’s side.

Farooq Abdullah, the three-time chief minister of Indian-occupied Kashmir, has been detained since August without charge. His son, Omar, who also served as chief minister in Indian-occupied Kashmir, is in jail. Farooq’s father and Omar’s grandfather, Sheikh Abdullah, who initially sided with India at the time of partition, was imprisoned by India for eleven years, even after serving as the region’s “prime minister.” The message for Kashmiris is clear: India sees Kashmir as a colony and Kashmiris as a people to be colonized and coerced.

Meanwhile, on the other side of the Line of Control in Pakistan’s Azad Jammu and Kashmir region, there are growing calls to come to their aid of their fellow Kashmiris besieged by India. Last month, Pakistani forces had to restrain Kashmiri protestors who wanted to reach or cross the Line of Control into Indian-occupied Kashmir.

History shows that there are local drivers of an organized insurgency in Kashmir that precedes Pakistan’s involvement. The 1947 tribal raid into Kashmir from Pakistan was preceded by pogroms that took the lives of upwards of two hundred thousand Muslims in the Jammu region, waged by the forces of the Hindu maharaja Hari Singh and the Hindutva extremist group, the Rashtriya Swayamsevak Sangh or RSS. In the late 1980s, before Pakistan commandeered the Kashmiri insurgency, thousands of Kashmiri refugees fled into Pakistan, organizing their own armed resistance to Indian rule.

Herein lies the risk for Islamabad: the Indian siege will continue, Pakistan’s pleas to the world on Kashmir will continue to be met with deaf ears, and it could be pressed by unsympathetic powers to restrain its own Kashmiri populace—on top of the existing pressure to clamp down on domestic Kashmir-focused militant groups. Pakistan, a party to the Kashmir dispute, may be relegated to policing its own people as India is allowed to run amok in Kashmir.

Khan certainly remembers the experience of former military ruler Pervez Musharraf, whose clampdown on many of these organizations after the 9/11 and 2001 Indian parliament attacks resulted in multiple assassination attempts on him and a domestic blowback few Pakistanis could have ever imagined.

Musharraf’s 2002 address on Kashmir is worth revisiting today, as the State Department is effectively boxing in Khan. As Khan makes the case for a diplomatic resolution, Wells, America’s top diplomat for South Asia, has largely played an antagonistic role.

Wells has emphasized Pakistan’s counterterrorism obligations over India’s human-rights violations. By speaking of Modi’s plans for “engagement with a new generation of political leaders,” in Kashmir, she’s endorsed New Delhi’s campaign of political reengineering, which has involved the imprisonment of the old political guard. And, as Modi continues his siege on Kashmiris and a broader campaign to build an authoritarian, Hindu majoritarian “New India.” Wells cheered on Modi’s rally at a stadium in Houston. Indian opposition figures are warning of creeping fascism in their country, but American officials have nothing but praise for Modi.

Wells’s more combative language has been reserved not for Modi, the aggressor in this crisis, but for Khan. In a press briefing, a detailed response from Wells on the human-rights situation in Kashmir required multiple follow-up questions from a reporter. But she went out of her way to take a swipe at Khan, cynically raising his silence on the plight of the persecuted Uighurs. Wells, a non-Muslim, suggested that there is a falseness to Khan’s expressions of concern for his fellow Muslims.