India Could Make or Break the EU’s Global Gateway 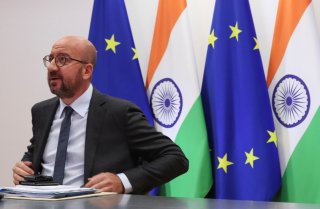 As an influential rising power and a natural partner to the European Union (EU) in the Indo-Pacific, India has also been wary of China’s Belt and Road Initiative (BRI) projects in its immediate neighborhood and beyond. Due to India seeing China as an important economic partner and a fierce “systemic rival,” India and the EU will find plenty of common ground in working together on Global Gateway, the EU’s €300 billion international investment project. Additionally, both have increasingly asserted strategic autonomy over the growing need for independence in decisionmaking amidst ongoing great-power competition.

The EU’s intent to expand its presence in the Indo-Pacific was clear at the Thirteenth Asia-Europe Meeting (ASEM), held in November 2021. Global Gateway—which is aligned with the goals of the Build Back Better World (B3W), the UN’s Agenda 2030 and Sustainable Development Goals (SDGs), and the Paris Climate Agreement—intends to provide a value-driven alternative to the BRI. Involving India within an infrastructure development framework would prove lucrative—from diversifying supply chains and engaging in digital transformation to green transitions (India and France initiated the International Solar Alliance) and inclusivity in development efforts. As co-advocates for the involvement of low and middle-income nations within multilateral development initiatives, India could prove critical to the EU’s attempt at creating a democratic, inclusive, and link-based framework.

Global Gateway in the Indo-Pacific

The West is concerned about its overdependence on China, especially in terms of supply chains and trade. In September 2021, the United States and the EU inaugurated their Trade and Technology Council to discuss several major economic and technological challenges presented by China’s coercive trade practices. Worried about China’s growing maritime footprint, particularly in the East and South China Seas and the Indian Ocean region, the EU has initiated independent efforts to boost its partnerships with the Association of Southeast Asian Nations (ASEAN) and the Pacific countries.

In a bid to renew its commitment to the region amid rising tensions, the European Council approved the EU Strategy for Cooperation in the Indo-Pacific in April 2021. The joint communication on the strategy, released in September, highlighted seven priority areas for action: “sustainable and inclusive prosperity; green transition; ocean governance; digital governance and partnerships; connectivity; security and defense; and human security.” This is certainly an extension of the “sustainable, comprehensive and rules-based connectivity” that was outlined in the 2018 EU-Asia connectivity strategy, as well as the connectivity partnerships with Japan (2019) and India (2021). The Global Gateway strategy—which plans to mobilize investments worth almost €300 billion until 2027 in the digitalization, health, climate, energy, transport, education, and research sectors—further enhances the scope of the cooperation on a global scale and will certainly focus on partner countries in the Indo-Pacific. India is undoubtedly a key country in this European formulation.

Global Gateway is a critical European strategy, which is set to chart the next five years of the EU’s Asia—and China—outlook by focusing on building resilient connections both within Europe and beyond through “links and not dependencies.” Rooted in multilateralism, it intends to implement a “Team Europe” strategy to unite EU member states, European financial institutions, and national development banks while engaging actively with international partner states such as the United States, India, and Japan. It is based on six principles: “democratic values and high standards; good governance and transparency; equal partnerships; green and clean; security focused; and catalysing private sector investment.” These principles underscore the shared values and priorities of the EU and India and will guide their evolving cooperation strategies. Certainly, enough frameworks exist between the EU and India to fulfill their shared, value-driven goals. But the question is whether it is all talk. For Global Gateway, it is still early in the process. As EU-India relations continue to become entrenched, effective and sharper policies will be implemented. The announcement may just be the beginning.

Although India-EU diplomatic ties began in the early 1960s, their cooperation agreement signed in 1994 has provided the legal framework for relations. In 2004, both established a strategic partnership that emphasized shared values of democracy, human rights, and a multilateral, rules-based world order. In June 2007, New Delhi and Brussels launched free trade agreement (FTA) negotiations that came to a standstill in 2013. The May 2021 EU-India Leaders’ Meeting agreed to resume talks for a comprehensive FTA, although no date has been set.

However, it is only in the last few years that the relationship has really taken off. In 2016, the India-EU Agenda for Action 2020 was endorsed as a common roadmap to guide and strengthen their strategic partnership. In 2018, the partnership got a further boost after the European Council endorsed the joint communication “Elements for an EU Strategy on India,” which proposed to reinforce the EU-India strategic partnership; cooperate on global challenges, foreign policy, security, and defense; realize the untapped potential of the trade and investment relationship; invest in talent and innovation; and build on shared global imperatives (like human rights and democracy). 2020 saw the release of “EU-India Strategic Partnership: A Roadmap to 2025,” which focused on sustainable modernization, foreign and security policy, digitization, research and innovation. The EU-India Connectivity Partnership finalized in May 2021 builds on India’s strategic partnership with the EU and will “support sustainable digital, transport and energy networks, and the flow of people, goods, services, data and capital centred on equity and inclusivity … and assisting in global development efforts, based on Sustainable Development Goal principles that no one is left behind.”

India can play a crucial role in the effective implementation of the EU’s ambitious connectivity strategy through the India-EU Connectivity Partnership. New Delhi and Brussels have long sought ways to “further cooperate in the areas of research, technology and digital transformation,” driven by a common faith in ideals of sustainability, democracy, and rules-based order that put “particular emphasis on social, economic, fiscal, climate and environmental sustainability.” The same ideals are outlined in both Global Gateway and the EU-India connectivity framework with their focus on “joint support for sustainable connectivity in third countries and regions,” as well as on catalyzing private sector financing. Europe and India must track down ways of organizing and synergizing different public and supra-national projects, and offer prescribed procedures and data by focusing on regions less infiltrated by the BRI, particularly in Eastern Europe, India, and Japan.

Furthermore, in the supply chain domain, the India-Australia-Japan-led Supply Chain Resilience Initiative (SCRI) could be vital to Global Gateway, as both focus on reinforcing “the resilience of… supply chains” and diversifying global supply chains to reduce dependence on China-centric supply routes. Further, as Global Gateway expands its geographical scope beyond the European neighborhood, it can synergize with India’s Act East Policy, the India-Japan Platform for Business Cooperation in Asia-Africa, its Connect Central Asia policy, and its Look West policy. Such cooperation can be built on the robust ties India shares with the EU, and with specific EU states such as France and Germany. On defense and security, too, the new strategy can help coordinate and integrate European industry to explore opportunities that are mutually beneficial. Already, India has close defense ties with several individual European countries. The strategy can be used to promote the development of a sustainable blue economy, as outlined in the EU-India Roadmap to 2025, and to support a green transition across the world. Finally, the resumption of EU-India negotiations on the long-stalled FTA is likely to impact the scope for cooperation between India and Global Gateway.

India was one of the first countries to engage with the EU at the diplomatic level, but it was only after their strategic partnership was formalized that a boost in trade and investment occurred. While France’s Defence Minister Florence Parly has recently reiterated the importance of the “Make in India” initiative to France’s defense industry, increased protectionist trade practices from India impede its growth. Hence, India’s outreach to Europe is negligible when compared to China, which solidified its presence in European countries in 2012—especially following its 16+1 initiative comprising Central and Eastern European countries, which briefly during 2019-2021 was 17+1—or Japan, which managed to “mainstream Europe in Japan’s foreign policy” under former Prime Minister Shinzo Abe.

Nonetheless, the tide is turning. India shares strong ties and engages with European states like France, Germany, and the Netherlands on issues ranging from security and development policy to cybersecurity and renewable energy. In recent years, India has started to focus on Nordic countries, especially under the sustainable connectivity inroads, providing an opportunity for India to grow its European outreach: In September 2020, India and Denmark launched a Joint Statement on the Establishment of a Green Strategic Partnership, aiming for collaboration in climate change and renewable energy, economy, and science and technology. Indian external affairs minister S. Jaishankar’s official visit to Slovenia, Croatia, and Denmark in September 2021 was an important opportunity for “reviewing the progress in India’s bilateral ties with these three countries, and strengthening multifaceted relationship with the EU.” India has so far focused on selective member states and not on Europe as a collective enterprise—that needs to gradually change.