India Is Failing to Learn from Terrorist Attacks 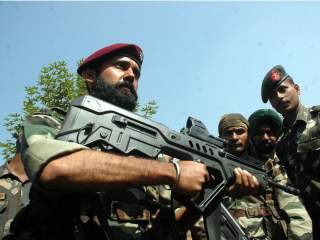 In the predawn hours of January 2, six heavily armed terrorists stormed India’s Pathankot Air Force Base, located in the northern state of Punjab and not far from the border with Pakistan.

In the assault’s aftermath, Indian journalists, analysts and officials have lauded the bravery of the deceased (seven security officials died) and feverishly debated how to deal with Pakistan, where Indian authorities believe the perpetrators were from.

They have also, however, focused on a considerably more uncomfortable topic: India’s botched response.

The questions surrounding Pathankot perplex as much as they proliferate. In particular, how did multiple militants manage to enter the country and move around unencumbered for so long, even after law enforcement officials were aware of their presence? As one observer pointed out, the attackers, before launching their assault on Pathankot, “roamed around Punjab in a hijacked vehicle for more than 15 hours, even though information of the carjack was given to authorities; indeed, it was an officer’s car.”

More to the point, how could six gunmen gain unchallenged access to such a highly secured facility? And why did it take several days to end a localized assault?

Some of India’s actions and decisions following the attack were particularly questionable. According to The Hindu, even though thousands of Army troops were in relatively close proximity to Pathankot, the government decided to fly in National Security Guard (NSG) forces all the way from Delhi—265 miles away by air—to lead the operation to secure the base. The NSG is an elite force, but it was reportedly out of its element in Pathankot—unfamiliar with the terrain and surprisingly underequipped (its personnel lacked basic essentials such as proper night vision devices). The NSG was one of three commanding bodies at Pathankot. Another was the Defense Security Corps, an outfit with members described by one Indian defense analyst (perhaps unfairly) as “retired and unmotivated” military personnel. They lack counterterrorism training and were armed only with “standard-issue, self-loading” rifles.

To be sure, the Indian response was by no means an utter failure—and by some basic measures, it was a great success: there were no civilian casualties, and none of the military assets housed on the base were damaged. One analyst argued that the long duration of the response was a reflection not of incompetence and slowness, but of caution and judiciousness meant to avert further casualties.

Still, India’s response was far from flawless. Some pointed to “glaring gaps in planning, command, training and equipment.” Others flatly described it as a “debacle.” Even India’s defense minister acknowledged problems in the response.

A major consideration for New Delhi in the coming days will be diplomatic: should it continue its recently resurrected comprehensive dialogue process with Pakistan? A more urgent question, however, is what India must do to strengthen its counterterrorism capacities. More terror attacks are highly likely if not inevitable in the coming months, regardless of the status of its relationship with Islamabad.

Consider that India has been hit by terror during warm and cold periods alike in its relations with Pakistan. The 2008 Mumbai attacks happened one year after the launch of backchannel discussions on Kashmir, and just weeks after the opening of new bilateral trade routes. Contrast that with last July. At a time when the two sides were slinging insults and accusations at each other, gunmen attacked a bus and police station in Gurdaspur, a Punjab district about twenty miles from Pathankot. The perpetrators in both 2008 and 2015 were Lashkar-e-Taiba (LeT), an anti-India terror group from Pakistan with ties to the Pakistani security establishment. These incidents should be distinguished from other acts of terror in India attributed to homegrown terrorists—such as another deadly assault on Mumbai in 2011 and the bombing of a German bakery in the city of Pune in 2010, both blamed on the domestic outfit Indian Mujahideen (albeit a group which has ties to LeT).

Several factors underscore the sustained threat of terror in India and the likelihood of additional attacks in 2016. One is the withdrawal of international combat troops from Afghanistan. This presents anti-India groups (such as LeT) that had been helping the Taliban fight foreign troops in Afghanistan with an opportunity to redirect their attention back to India.

Another factor, perhaps linked to the first, is the slow reemergence into the public sphere of several top anti-India militant leaders who had been quiet in previous years. One example is Masood Azhar, the head of Jaish-e-Mohammed (JeM). In 2014, after years of silence, a recorded message from Azhar was played at an anti-India rally in Pakistan. He has since boasted of having 300 suicide bombers at his disposal ready to strike India. JeM, which attacked India’s Parliament in 2001, has been identified by Indian officials as the group responsible for the Pathankot attack. Indian and other analysts suggest that Pakistan’s spy agency may direct groups like JeM and LeT to stage further attacks in India in order to forestall any chances of India-Pakistan détente—and particularly after the two governments agreed in December to resume formal dialogue, and after Modi unexpectedly visited Pakistani Prime Minister Nawaz Sharif in Pakistan on Christmas Day.

Recent entrants to the South Asian terror scene also suggest the possibility of further strikes in India. ISIS—which has claimed attacks in Pakistan, Afghanistan and Bangladesh, but not in India—is less of a concern than Al Qaeda’s new South Asia branch. To this point the latter’s bark has been worse than its bite, though it is worth noting that India has been a major focus of the propaganda and rhetoric of its leader, Asim Umar.

In effect, the stakes are high for India—yet few seem to have good answers for what must be done to improve its counterterrorism capacities. It is a challenge with no simple solutions, and admittedly one that many other countries—including the United States—are struggling to address at home as well.

There are certainly some simple, concrete correctives. More counterterrorism training is one obvious example. Another is the need for more electronic surveillance in sensitive spots (Pathankot, for example, has no electronic sensors).

Beyond this low-hanging fruit, the task is much tougher. Decision making in periods of crisis will need to be reassessed, rules of engagement for different security units revisited and overall operational procedures more clearly defined. This will entail close coordination and cooperation between civilian and military officials—a delicate matter in India, where civilian supremacy over the military has long been cherished. Efforts to ensure this supremacy may have played out at Pathankot; the NSG forces deployed to the besieged base (while Army troops were forced to stand by) come under the command of the Indian home ministry.

Additionally, in Punjab, the site of the Pathankot and Gurdaspur attacks and a likely future target given its close proximity to Pakistan, officials will need to do more to combat an acute drug crisis. This scourge—not concerns about Pakistan—dominates recent conversations I’ve had with locals in Punjab, where according to estimates 75 percent of children are addicted (mostly to heroin and crystal meth) and more than half of people aged eighteen to thirty-five are users. Drug smuggling routes in the state facilitate the undetected movement of terrorists, and speculation has abounded of collusions between the Pathankot gunmen and drug cartels in Punjab.

Above all, India will need to better understand the unconventional and asymmetric modes of warfare used by terrorists who are agile, fast-moving, technology-savvy and—above all—ready to die. Such adversaries pose great problems for plodding conventional militaries used to fighting those like themselves, and for law enforcement forces used to targeting common criminals.

Sadly, some dimensions of the ineffective response at Pathankot—particularly the involvement of different security agencies with no single commanding entity—were also on display in Mumbai back in 2008, when local police, army and navy commandos and NSG forces (who took twelve hours to arrive) were all involved in the operation to apprehend ten fast-moving and highly armed gunmen.

Given the heightened threat of terror in India today, the country can scarcely afford to keep failing to learn lessons from the past.

Michael Kugelman is the senior associate for South Asia at the Woodrow Wilson International Center for Scholars.