The India-Pakistan Crisis Is Not Over 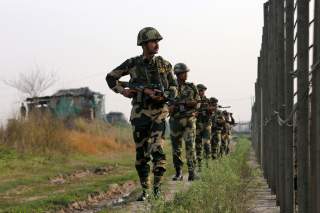 The India-Pakistan crisis appeared to be moving toward de-escalation on Thursday, as Pakistan’s Prime Minister Imran Khan pledged to return a captured Indian pilot to New Delhi “as a peace gesture.” Khan’s announcement was met with near unanimous praise by Pakistani parliamentarians—including those from opposition parties bitterly opposed to Khan.

But it would be a mistake to assume that the crisis is over or could not reignite in the weeks and months ahead. The United States and other world powers ought to sustain and increase their role in managing the crisis in South Asia and steering India and Pakistan toward comprehensive talks—including over the issue of Kashmir—once politically feasible.

Following Khan’s announcement, Indian prime minister Narendra Modi boasted, “After a pilot project is completed, it can be made scalable. A pilot project has been implemented. Now a real [project] must be done. The previous one was [just] practice.”

Modi not only implied that the impending return of the pilot was an Indian victory stemming from Pakistani weakness, but he also suggested that India could repeat its February 26 intrusion into Pakistani air space and payload release (or air strike) into Pakistani territory. One could interpret Modi’s statement merely as face-saving rhetoric. His Bharatiya Janata Party (BJP) faces general elections in the spring and his standing has been diminished over the past year.

But Modi’s tenure as prime minister, combined with his electoral compulsions, suggest that there is danger that he could choose to escalate once again. His tenure has been marked by risky decisions—such as the demonetization debacle and the February 26 raid—made by a kitchen cabinet that ultimately backfired.

Meanwhile, India’s acerbic news channels are pressing Modi to stay on the path of escalation. India’s top English-language news channel, Republic, which is partly-owned by Rajeev Chandrasekhar, a BJP parliamentarian, has proclaimed that India has “brought Pakistan to its knees” and that “India’s decisive battle has begun.”

Since the February 14 militant attack targeting Indian paramilitary forces in Pulwama, Kashmir, hosts and guests on India’s major news channels have repeatedly called for chopping Pakistan into four pieces. These channels, which have been inciting anti-Muslim and anti-Pakistan hatred for years, toxically combine with the BJP’s fake news social-media operations. Together, they curate an alternative reality for middle- and upper-middle class Indians, deluding them into thinking that their military can escalate against another highly capable nuclear power without cost. This yields unreasonable and dangerous expectations from a large segment of the Indian public and these attitudes perhaps extend into India’s policymaking elite, much of which is now connected to or formally part of the Hindu extremist Rashtriya Swayamsevak Sangh (RSS) network.

The strategic culture of the “New India” is marked by a shallow me-tooism: a belief that India can match the capabilities and replicate the policies of great powers, ignoring its owns deficiencies and the capabilities of its adversaries.

Modi commanded the Indian Air Force for the first time in almost half a century to cross the Line of Control into Pakistan’s Azad Jammu and Kashmir (AJK) region. The escalation only led to fleeting euphoria in India that crashed when the Pakistan Air Force took down an Indian MIG-21 the next day. Bizarrely, Indian officials (mainly off the record) claimed and continue to claim that they killed two hundred to three hundred militants in Pakistan and shot down a Pakistani F-16. These claims have more or less been disproven by the global media.

Unfortunately, Indian journalists willingly serve as dissemination vehicles for their own government’s disinformation. And that has led to the creation of untenable myths about Indian military capabilities.

In 2016, India conducted what it claims was a “surgical strike” into AJK in the aftermath of a Jaish-e Muhammad attack on Indian forces in Uri. The nature and impact of that attack was grossly exaggerated by the BJP. But the story has taken on a life of its own. In January, a Bollywood film on the so-called surgical strike was released. It has grossed over $33 million at the box office since its release in mid-January.

In the wake of the February 14 attack, Modi was pressed to surpass the mythical version of the “surgical strike.”

During the current crisis, NDTV’s Vishnu Som tweeted photos of “debris” he purported to be of a downed Pakistani F-16. The pro-Modi ANI News service had published these same photos earlier identifying them as craters from Pakistani bombs dropped near Indian Army posts. This is just one of hundreds of examples of propagandistic efforts by Indian journalists. The impact of all this is unclear. It could provide Modi with an off-ramp or it could sustain public support for further escalation.

According to Prime Minister Khan, India was preparing for further escalation into the twilight hours of Thursday until the situation was “defused.” Whether that apparent de-escalation was achieved through bilateral dialogue or third-party diplomacy is unclear. But were India to attack Pakistan again, then Pakistan would have both the capability and will to respond to India. There is indeed danger that India and Pakistan could get locked into a game of one-upmanship—one that could ultimately lead to their armies mobilizing for a ground war.

What’s Needed: Continued Crisis Management Necessary and a Resolution to the Kashmir Dispute

The paramount interest for the United States and the world community is that two nuclear powers avoid war. The crisis in South Asia is no conference room simulation. And it is no kabuki theater show. It is a real, live scenario unfolding between two nuclear powers home to over 1.5 billion people.

As Prime Minister Khan warned earlier this week, the path to previous major calamitous wars was paved by miscalculation. India and Pakistan both clearly seek to avoid mutual annihilation, but nonstrategic, political calculuses combined with misreading the behavior, capabilities, and intentions of the other could put the two countries on the brink of the unthinkable.

To defuse the crisis and shift toward resolving the underlying issues, it would be a mistake to reduce it to an issue of counterterrorism.

Jaish-e Muhammad, a UN-proscribed terrorist organization based in Pakistan, claimed responsibility for the February 14 attack. Pakistan should take measures to curb the group’s operations—not only to comply with UN Security Council resolutions but also because the group has been a threat to Pakistan and tarnishes the legitimate Kashmiri struggle for self-determination.

But India too has supported Baloch separatist groups that target civilians and security forces in Pakistan—for example, by bombing passenger trains. Aslam Acchu, a Baloch separatist militant who plotted the attack on the Chinese consulate in Karachi and dispatched his son as a suicide bomber to target Chinese workers in Pakistan, received medical treatment in India.

And the Modi government has released Hindu extremists involved in terrorism attacks targeting Pakistani nationals and Indian Muslims, including the 2007 bombing of the Samjhota Express train. All together, these attacks have claimed the lives of over a hundred people. Among those released include Swami Aseemanand, a confessed terrorist ringleader who has been photographed over the years with Modi on several occasions.

Washington and other major powers—including Beijing and Moscow—should continue to play a crisis management role, preventing Islamabad and New Delhi from further escalatory action, especially as India’s elections near.

But when India’s elections are over and a new government settles, then India and Pakistan need to resume a comprehensive dialogue on all outstanding issues between them, most especially the dispute over Kashmir.

The main driver for militancy in Kashmir has been and remains the brutal Indian occupation. The Muslims of Kashmir were suppressed under the Hindu Dogra Raj until the partition of British India in 1947. Following pogroms that drove out hundreds of thousands of Kashmiri Muslims from Jammu in 1947, the Indian state ruled over Kashmiris with similar brutality, making clear from the start that it covets the land of Kashmir, but views its people with disdain. Even Sheikh Abdullah, an opportunistic Kashmiri politician who collaborated with New Delhi was imprisoned for over a decade on the orders of India’s first prime minister, Jawaharlal Nehru.

This is the broader context behind the present Kashmiri insurgency, which renewed in 1989 and continues in a lower-intensity form today. Indian forces killed thousands of Kashmiris civilians in its counterinsurgency campaign, which involved the systematic use of rape and torture. India’s continued heavy military presence in Kashmir sustains Kashmiri antipathy toward New Delhi. Those in the valley today overwhelmingly support freedom from Indian rule.

The Indian occupation of Kashmir is as much a driver of the February 14 attack in Pulwama as any Pakistan-based entity. Both the suicide bomber, Ali Ahmad Dar, and alleged purchaser of the vehicle used in the attack, Sajjad Bhatt, were locals who joined the insurgency after being abused by Indian security forces.

According to Dar’s relatives, Indian forces abused him on his way home from school in 2016. In the same year, they claim he was shot by Indian forces while taking part in a protest. As for Bhatt, his uncle says that he was taken to a camp by Indian security forces and beaten. Indian security forces, in effect, many of the militants that target them.