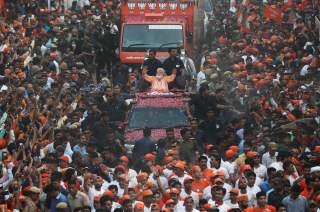 There has been a spate of India headlines this month. Prime Minister Narendra Modi wins big in the recent elections, but gross domestic product growth falls to 5.8 percent and unemployment spikes. The first event may prove economically harmful, the second does not especially matter and the third is misleading. More important than (rough) estimates of GDP and unemployment is the government’s ongoing failure to address India’s central development challenge.

Start by dismissing reported GDP. That Delhi’s GDP claims have stretched credulity is old news, now replaced by worries growth is too slow. But GDP is just an accounting tool with no direct implications for individual welfare. India’s working age population is known to be huge and expanding. If more people are employed in decent jobs, then GDP growth will probably be high and still not matter much in itself.

The policy debate has thankfully shifted somewhat from GDP to jobs. Since independence, all Indian governments have suppressed employment data or simply failed to measure it. The most recent document from the Reserve Bank offers no results since 2011–2012 and the latest from the Labour Ministry relegates core figures to page 177, buried under a mountain of nonsense.

It thus constitutes progress that the Modi administration released unfavorable labor numbers just after the election (after denying them for months). But the focus has been on supposedly record-high unemployment of 6.1 percent. Official data is so poor there is no way to tell if this is a record. More salient, if Delhi were pursuing sound policies, joblessness would be this pervasive or more so.

Given the demographic expansion and the different development levels of Indian states, the number of labor market entrants should overwhelm job creation in parts of the country, leading to high spot unemployment and long-term labor migration. But dynamic hiring in some regions and sectors would keep job-seekers engaged in the market.

The International Labor Organization attempts to measure global labor force participation, an almost impossible task. It estimates the global average at 61 percent for 2017. It puts India’s eternal rival China at 69 percent. The Philippines, another country looking to young workers to spur growth, is at 60 percent, higher than India was even before Modi.

At 50 percent participation and falling, a jobless rate half the newly disclosed level would still be a failure. The much-touted demographic dividend has had no value because so many incoming workers give up before contributing to the economy, and the rest must support them. Dependency ratios typically refer to employees supporting retirees. In this situation, successful workers must offset both retirees and the many younger workers who are on the sidelines indefinitely.

The Modi government did nothing meaningful to respond to declining participation in its first term, trumpeting itself as the champion of the common man while delegating to states the most important issue for the common man. The states failed, and, if the prime minister does not act decisively now, India will fail to prosper.

Initial returns are discouraging. In most of India, manufacturing, agriculture and mining firms with more than one hundred workers can only fire workers with government permission; in other sectors there is also a clearance process. If firms cannot fire, then they are naturally much more hesitant to hire. A labor market that does not absorb the demographic wave has been the result.

Labor reform has been promised as an agenda item for Modi’s second term, but only as a peripheral issue, leaving untouched the critical ability to downsize when necessary. Promises to improve the ease of doing business are endless, but, without labor reform, these efforts will boost profitability, not employment. In the same vein, proposed privatization can reduce wasted government spending but private firms face the same labor restrictions as the public sector and also will not hire.

Worse is the belief that what India needs is a larger fiscal deficit or much looser monetary conditions. Fiscal and monetary stimulus is for governments afraid of reform. If Prime Minister Modi refuses to directly address labor force participation in his second term, then India will have wasted a full decade of its demographic expansion. And its dream of future economic leadership will die.

Derek M. Scissors is a resident scholar at the American Enterprise Institute, where he focuses on the Chinese and Indian economies and on U.S. economic relations with Asia. He is concurrently chief economist of the China Beige Book.