India and Vietnam Can Rescue Asia's Balance of Power 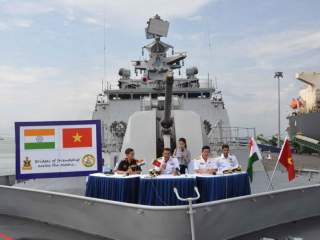 India no longer hides its aspirations of playing an active political and security role in the Asia-Pacific. For political and commercial reasons, the region is critical to India’s strategic thinking. But India’s may not be able to deftly integrate itself in the region, due to lack of consistent political will, steady military modernization and the galloping pace of the regional economy. However, New Delhi has been slowly expanding its strategic and economic heft through its Act East policy, blue-water navy and multilateral diplomacy.

In the evolving security context of the Asia-Pacific, one country that is key to India’s sustained presence and role is Vietnam. In the last few years, Hanoi’s diplomatic profile has grown in New Delhi’s strategic calculus. At the intersection of India’s Act East policy and Vietnam’s Look West policy, both countries have a historic opportunity to shape Asia’s balance of power.

Under the Modi government, a new maturation of India’s Asian strategy has included intensive high-level engagement with Vietnam. However, both countries can do much more to forge bolder diplomatic and military coordination, in view of the strategic rationale of closer ties. The brittle sense of anxiety about China’s territorial expansion and open disregard for international norms mandates that India and Vietnam improve their relations. Moving beyond the robust historical foundation of ties laid by India’s first prime minister, Jawaharlal Nehru, and Vietnam’s Ho Chi Minh, the two countries should adopt politico-military mechanisms to adapt to an evolving Asian order. The landscape is wide for greater collaboration in terms of expanding defense cooperation, naval diplomacy and trade and investments.

During the official visit of Vietnam’s Prime Minister Nguyen Tan Dung to New Delhi in October 2014, both countries’ leaders vowed to strengthen defense ties through security dialogue, enhanced service-to-service cooperation, capacity building and humanitarian mine action under ADMM-Plus. The two countries also signed an MOU in which India provided a concessional line of credit of $100 million for the procurement of defense equipment. This extension of credit and the provision of four offshore patrol vessels are the first of their kind, signaling India’s preparedness to become an arms exporter as well as its willingness to bolster Vietnam’s defense capabilities. New Delhi’s assistance in modernizing Hanoi’s military forces, however, is not a new development. There have been talks going on to sell the Brahmos supersonic cruise missile since the preceding United Progressive Alliance (UPA) government. Although little progress was made, due to the UPA’s hesitancy to export defense hardware, the Modi government has also failed to expedite the process in the last two years.

Vietnam has sought India’s cooperation in the maritime domain. Both countries have engaged in frequent vessel exchange, while Indian officers have imparted training to Vietnamese submarine forces. Interlocked in a territorial dispute with China and its expansive claims on the South China Sea, Vietnam has struggled to hold its ground amid China’s aggressive land reclamation and construction projects on reefs. A new report from Stockholm International Peace Research Institute (SIPRI) highlights that the Asia-Pacific region accounts for 46 percent of global arms imports over the past five years. This arms race in the Asia-Pacific underlines the region’s fraught security vulnerabilities, as China treats its smaller neighbors with impunity. India has historically been cautious in taking sides on territorial disputes. But a gradual policy change is evident under the Modi administration, as New Delhi approaches the issue with pragmatism, increasingly uninhibited by concerns of antagonizing China. India’s joint regional “Strategic Vision” with the United States, supporting freedom of navigation in the South China Sea (SCS), is one indicator of such a policy shift. Even though India has dismissed talks of joint patrols in the SCS with the United States, India is slowly warming up to the idea that it must undertake a greater security role to restore rule-based order in the region.

India’s partnership with Vietnam also first into the larger context of India’s evolving response to the U.S. “rebalance.” India, the United States and Vietnam share a common interest in preventing China from dominating seaborne trade routes and enforcing territorial claims through coercion. At a time when China is deploying advanced surface-to-air missiles on disputed islands in SCS, Vietnam sees the U.S. presence as a hedge against Beijing’s rising military power. Certainly, the U.S. military buildup in the region will have a significant impact on the regional balance of power. However, staunch diplomatic and security support from regional actors like India, Japan and Australia would be a reinforcing credible deterrent. And New Delhi’s economic commitment to Vietnam and the region is another factor that will shape how other states view India as a regional balancer.

Consistent failure at economic strides has led India’s commercial partnership with Vietnam to remain underdeveloped. Without the economy at the forefront of bilateral ties, prospects for greater India-Vietnam strategic collaboration remain feeble. While India’s trade with Vietnam is at a staggering low of $8.03 billion (2014), despite centuries of territorial disputes China and Vietnam still enjoy two-way trade of $66 billion (2015). According to a report by the Ministry of Planning and Investment’s Foreign Investment Agency, 1,346 Chinese projects are in operation in Vietnam with total registered capital of $10.4 billion, making China the ninth-largest investor of the 112 nations and territories investing in Vietnam. The Foreign Investment Agency reported that Chinese businesses had sharply increased their investment capital from $312 million in 2012 to $2.3 billion in 2013 and $7.9 billion in 2014. As a signatory of the Asian Infrastructure Investment Bank, Vietnam intends to take advantage of Chinese investments to ramp up its transport infrastructure sector. In light of these economic compulsions, Vietnam’s business class steadily makes efforts to temper anti-Chinese violence and rhetoric. In 2014, Forbes reported that Vietnam regrets anti-China violence, and pledges to stop any outbreaks so that supply lines stay open to the flow of textiles and smartphone parts from China.

A realist Indian approach to Vietnam would involve lubricating strategic and defense ties along with promoting vibrant trade and investment policy in the textile, agriculture, pharmaceutical, energy, oil and gas sectors. It is crucial for India to get its Vietnam policy right—a multifarious relationship rooted in history and shaped by the evolving geopolitical imperatives of the Asian century. Efforts to embellish this bilateral partnership not only hold the keys to the Asian balance of power, but also pave the path for India’s truly engaged role in the Asia-Pacific.

Sylvia Mishra is a researcher at the Observer Research Foundation, working on U.S. policy in the Asia-Pacific and India-U.S. relations.