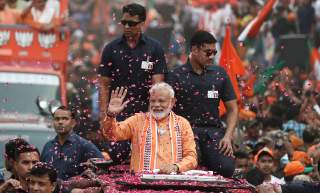 In what amounts to a clean sweep, Prime Minister Narendra Modi and his party have won a fresh mandate from the Indian electorate to rule for another five years. There are many factors that have contributed to the outcome.

Probably the most important factor was the Bharatiya Janata Party’s (BJP) success in making the election a presidential-style election, which turned it into a referendum on Modi’s charismatic and pugnacious persona rather than on his government’s performance over the past five years. This strategy was aided immensely by the opposition’s inability to project a single credible prime ministerial candidate—primarily because there was a lack of consensus among the more than twenty opposition parties. There were many reasons that contributed to this outcome, such as the oversized ambitions of several party leaders, and the fact that multiple regional parties, which formed the bulk of the opposition to the BJP, were locally pitted against India’s National Congress Party as well. Congress made the decision to go it alone in some crucial states, which also divided anti-BJP votes and worked in favor of the ruling party.

Given the national presence of the Indian National Congress, its president, Rahul Gandhi, was the most likely candidate for the job of prime minister. However, the inherent animus against Congress harbored by many opposition leaders prevented him from being anointed to lead the Opposition against Modi before the polls. The fact that Gandhi is a member of the Nehru-Gandhi dynasty, which has controlled Congress for the past several decades, has also worked against him. The “dynastic” nature of the party was exploited to the hilt by the BJP, especially after Rahul’s sister, Priyanka Gandhi Vadra, was inducted into Congress leadership in the run-up to the elections.

Additionally, the Indian National Congress played into the BJP’s hands by running a large, personal, negative campaign against Modi. This was symbolized by the slogan coined by Rahul Gandhi “chowkidar chor hai” (the watchman is the thief), a reference to the prime minister’s alleged culpability in providing undue financial favors to select business houses in connection with defense contracts. This strategy boomeranged, however, and allowed Modi to hog the limelight and relegate his government’s lackluster policy performance to the background. Modi also turned the tables on Rahul Gandhi by raking up financial scandals that had plagued Congress governments over the past three decades, including during the years when his father, Rajiv Gandhi, was the prime minister. The party’s attempt to emphasize ameliorative economic measures for the weaker sections of society in its election manifesto was lost in this din of charges and counter-charges.

Furthermore, policy issues, especially economic policy issues, turned out to be of marginal concern to the electorate. This was surprising given the visible distress in the agricultural sector, the highest rate of unemployment in forty-five years, the mess created by demonetization in 2016 that affected the average Indian adversely, and the impact of the Goods and Services Tax, which created resentment in much of the business sector. Macroeconomic indicators also signaled a noticeable slowdown in economic growth, but much of this data was either fudged by the government or was too complicated for most voters to understand. Therefore, these macroeconomic realities had no impact on the outcome of the elections.

The election was decided on emotional issues rather than policy issues. Prime Minister Modi successfully made national security a central theme in his election campaign. He was aided in this endeavor by a major terrorist attack in Kashmir in February for which a Pakistan-based terrorist outfit claimed responsibility. The attack and the Indian air strike deep into Pakistani territory in response to it provided the BJP with an election bonanza by creating the image of a decisive prime minister who could teach Pakistan a lesson even at the cost of risking a war between the nuclear-armed neighbors. Any attempt by the opposition to raise the subject of intelligence failure that facilitated the act of terrorism or to demand details of the casualties inflicted by the Indian response was immediately termed “anti-national” by the prime minister and his chorus of supporters in the media. The Washington Post summed up this phenomenon succinctly: This election is going to be the test of a common man’s patriotism. If you are with Modi, you are with India and if you are not with Modi, you are anti-India.

This exploitation of national security as a major election theme by the BJP built on its credentials as the primary proponent of Hindu nationalism that de facto excludes religious minorities, especially Muslims, from the national mainstream. Pakistan, India’s Muslim neighbor that was carved out of British India in 1947, has become a convenient whipping boy for the expression of anti-Muslim views. The BJP media trolls linked any attempt by the Congress to counter Modi’s national-security narrative and the hyper-nationalism it engineered to its presumed policy of “Muslim appeasement” and the consequently “soft” policy toward Pakistan.

The Congress leadership, in order to counter the long-standing allegation against it of “Muslim appeasement,” had begun to emphasize its Hindu credentials more than a year ago by adopting a “soft” Hindutva posture against the “hard” Hindutva of the BJP. By doing so the Congress turned itself into the BJP’s B team and sacrificed its commitment to India as a plural society. This strategy was bound to fail miserably because “as a pale imitation of the BJP’s aggressive Hindutva, it [the Congress] cannot compete with the genuine article.”

The equation of Hindu nationalism with Indian nationalism is now taken for granted by large sections of the Indian population. This is demonstrated by the fact that Yogi Adityanath, the chief minister of India’s largest state Uttar Pradesh and an intensely anti-Muslim Hindu monk, was the second most sought after speaker after Modi in the BJP’s election rallies across the country. Among his other inflammatory comments, Adityanath referred to Muslims as the “green virus” (green is the color of Islam as saffron is the color of Hinduism) that has infected the Congress. Other BJP leaders have not been far behind in their anti-Muslim rhetoric. Sadhvi Pragya Thakur, a candidate for the BJP in the elections who is being tried for terrorism, declared that Mahatma Gandhi’s assassin, Nathuram Godse, was a patriot presumably because the Hindu right considers the Mahatma to have been soft on Muslims.

The media helped to amplify the majoritarian and hyper-nationalist instincts in the country and often conflated the two. Several television channels with national reach were particularly culpable in this regard. This helped BJP propagandists to denigrate the opposition’s attempt to ask the government legitimate questions regarding national-security issues.

One should also not ignore the fact that a major contributor to the BJP’s victory is the disciplined and ideologically committed cadre of the RSS, the parent body of the BJP and the ideological font of Hindu nationalism. These cadres catalyzed pro-BJP voters to turn out in large numbers. In contrast, the Congress as an amorphous organization is bereft of committed cadres. Its so-called “workers” are largely opportunists or hired hands. Regional parties, such as the All India Trinamool in West Bengal, that have committed cadres have done reasonably well in the face of the BJP juggernaut but are incapable of providing a pan-national alternative to the ruling party.

The Modi-led BJP victory is likely to have long-lasting effects on the Indian polity. The BJP has been accused of subverting the autonomy of institutions, such as the Election Commission and the Central Bureau of Investigations, that are critical to the success of democracy in the country. Under Prime Minister Modi, it has also been blamed for promoting a form of populism and a cult of personality that could be conducive to the rise of authoritarianism. India needs a strong and unified opposition committed to principles of liberal democracy in order to keep these tendencies in check. However, this election indicates that no such formation is currently on the horizon. In the absence of a credible alternative to the BJP, there is a danger that while procedural democracy may endure in India, the liberal spirit undergirding it could be in danger of extinction.