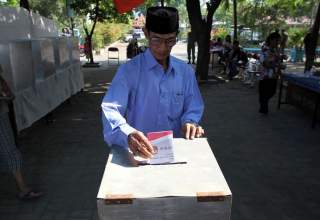 On July 9, Indonesia, the world’s fourth largest country and third largest democracy, will go to the polls to elect its fifth president since the end of the authoritarian government of President Suharto in 1998. Sixteen years after that violent political succession, when Indonesia’s economy was reeling from the Asian financial crisis and many observers feared Balkanization in Indonesia, Indonesia has emerged as a stable democracy, a rising economic power, and an increasingly important global player.

Politically, the election marks the end of President Susilo Bambang Yudhoyono’s constitutionally limited two terms as Indonesia’s first directly elected president in the modern era and strongly suggests democracy is now entrenched in Indonesia. While Indonesians might not always like their politicians, public polling and the sentiment on the street suggest little appetite to abandon their new political system.

Economically, Yudhoyono has managed to right the ship after the Asian financial crisis nearly sunk the country in a sea of debt and bankruptcies. Indonesia’s ability to pay down its foreign debt and sustain growth rates between 5 and 6 percent, even during the global financial crisis, has been remarkable. This turnaround, buoyed by the rise of a highly consumptive middle class, should be credited to Yudhoyono’s pragmatic leadership of the economy. While the economy is not all roses, and challenges abound, Indonesia’s ability to pull itself above water since 1998 and become the world’s tenth largest economy has been no small feat.

Internationally, Indonesia has reassumed its role as de facto leader of the Association of Southeast Asian Nations (ASEAN), a fractious political grouping in which only Indonesia has the clout to safeguard cohesion when divisive issues, such as territorial disputes in the South China Sea, threaten to pull ASEAN apart. More broadly in Asia-Pacific security affairs, with ASEAN as its lure, Indonesia is working hard to enmesh a rising China into a regional web of interdependence. Indonesia is also setting its sights globally, seeking to share lessons learned from its process of democratization with others and acting as a leading middle power in the United Nations.

Wednesday’s election pits two candidates with extremely different personalities, but whose policy platforms suggest continuity and a likeliness to continue to guide Indonesia’s slow, but steady, ascent as a leading middle power.

On the one hand is Jakarta Governor Joko Widodo, whose down-to-earth credentials and political outsider persona appeal to voters wary of the influence of political elites who sustain a culture of rent seeking and patronage. Despite his relatively limited experience, his supporters believe he is as much of a reformer as the president he hopes to replace; his common-man identity and meteoric rise—ten years ago, he was a furniture salesman and two years ago, the mayor of a small city—in a political environment dominated by money politics gives hope for a new day in Indonesian politics.

In stark contrast to Widodo stands former General Prabowo Subianto, a self-defined strongman who appeals to Indonesians longing for strong leadership. While Yudhoyono can claim many accomplishments, perceived indecisiveness during his second term have made many Indonesians long for the days of a more decisive leader. Subianto, raised in a prominent family and having lived abroad for much of early life before rising quickly in the Indonesian military, is the embodiment of the political elite. While many Indonesians have expressed concerns over Widodo’s limited experience, Subianto’s alleged role in human-rights violations during his time in uniform similarly weighs heavily on the minds of voters.

Whoever wins, Indonesia’s next president faces significant challenges and will have important economic policy decisions to make soon after taking office. The government’s reliance on commodities exports has led it to neglect manufacturing and a ballooning fuel subsidy bill is stalling sorely needed infrastructure investments. Addressing fuel subsidies will be the next president’s biggest challenge, particularly given its popularity with lower-income voters, who will be key to whoever wins on Wednesday.

For the United States, Indonesia’s president will inherit a strong bilateral relationship with Washington, a partnership that has enjoyed the strong personal support of Presidents Obama and Yudhoyono. A Widodo presidency would be easy for the United States to embrace, and a Subianto presidency would be complicated by the ghosts of Indonesia’s authoritarian past. However, regardless of the outcome, the partnership is sufficiently institutionalized in government circles, and U.S. business is too interested in Indonesia for positive trends not to continue. Indeed, for Washington, Indonesia is a natural partner—a pluralist democracy and a responsible and increasingly influential global actor. Regardless of who is elected president, Washington should applaud the development of Indonesia’s democracy since 1998 and redouble efforts to continue to deepen this important partnership.