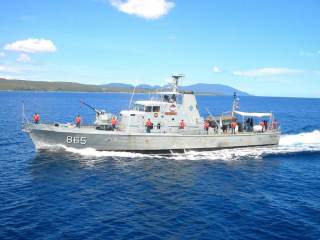 A recent incident near the Natuna Islands, involving the China Coast Guard and an Indonesian anti-illegal-fishing task force, has intensified debates over the type of strategy employed by Jakarta vis-à-vis Beijing’s growing assertiveness. The incident was not unprecedented; long before the incident, scholars used the term “hedging” or, as Rizal Sukma suggests, “diplomatic hedging” to label Indonesia’s strategy in responding to China’s rise.

In the existing literature, hedging is defined as a set of strategies employed by secondary states when they cannot resort to more straightforward options, such as internal balancing (boosting self-reliance by enhancing military and other material capabilities), external balancing (engaging the status-quo power to provide security guarantees) or bandwagoning (aligning national interests with the emerging power to avoid any future conflict). As an alternative, the strategy of hedging prescribes a middle position that keeps states from having to choose one side at the obvious expense of another. While such characterization has its merit, under this definition all secondary states in Southeast Asia would fall into the category of hedging states (except for, to a certain extent, the Philippines and Vietnam), since none of them adopts a pure strategy of either balancing or bandwagoning.

This raises the question of whether simply labeling a strategy as “hedging” is sufficiently helpful to assess the different courses of action employed by secondary states in Southeast Asia vis-à-vis China. How does Indonesia’s hedging strategy differ from those adopted by other ASEAN countries? And is this strategy sustainable as China signals a more assertive stance in the region?

Within the context of the U.S.-Chinese rivalry, flexible hedgers opt for flexibility and neutrality, and less of security guarantee or binding economic engagement from intense cooperation with the United States or China. This strategy is currently employed by ASEAN states that are relatively geographically distant from China, are not fundamentally challenged by China’s territorial claim and conduct only moderate, pragmatic relations with China. Malaysia, Singapore and Brunei are also included in this category, although each of them sits at a different point of the flexible-hedging spectrum.

Unlike Myanmar, Cambodia and Laos, whose economies are significantly dependent on China, Indonesia only has moderate economic and political stakes in the Middle Kingdom. Admittedly, ties between China and Indonesia have been growing rapidly since the two initiated a “strategic partnership” in 2005. In 2013, Presidents Yudhoyono and Xi further intensified ties when Xi lifted the two states’ bilateral relations to the level of a comprehensive strategic partnership in a wide range of fields, including industry, infrastructure development in the transportation sector, financial services and tourism. In October 2013, Xi delivered a speech to the Indonesian House of Representatives, where he first proposed the idea of building a “Twenty-First-Century Maritime Silk Road” with ASEAN. Under the economy-oriented President Joko Widodo, known as Jokowi, Indonesia and China seems to grow even closer. Jokowi’s idea of a “Global Maritime Fulcrum” has been said to be aligned with China’s Maritime Silk Road. Rizal Sukma, a former presidential advisor for foreign policy, has said that Indonesia’s maritime development agenda “fills in or overlaps with the Maritime Silk Road ideas” of Xi, particularly in the domains of connectivity, safety and diplomacy.

While there has been much coverage on intensifying ties between Jakarta and Beijing, the tangible value of such relations is more limited. On the investment front, there is a massive gap between China’s investment promises and reality. Indonesia’s Investment Coordinating Board (BKPM) has reported that as of 2015, Chinese investment only stood at 14 percent of what was pledged. This number is far below those of Japan’s and South Korea’s, both of which are above 70 percent. In terms of investment size, China only recently managed to rank tenth among Indonesia’s biggest foreign investors in 2015, and China’s investment of $75.1 million during the first quarter of 2015 is dwarfed by Singapore, ranked first with $1.2 billion, or the United States, ranked fifth with $292 million. While there has been moderate growth in trade volume between the two, Indonesia’s trade deficit with China has continued to increase for the past few years, surging from $3.27 billion in 2011 to $14.36 billion in 2015.

Indonesia’s case is very different from that of Laos, for instance, where China is the single largest source of foreign investment. China is also the largest investor in Cambodia, with more than $10 billion in cumulative investments. In 2012 Cambodia, while serving as chair of the twenty-first ASEAN summit, blocked the organization from issuing a joint communiqué on the South China Sea dispute. Last year, Cambodia organized a meeting with representatives from twenty-eight countries and emphasized its stance that ASEAN should not intervene in territorial disputes in the South China Sea. Admittedly, Indonesia’s decision making process is not completely independent from its economic relations with China either. The country is willing to make several exceptions in favor of China, but not to the extent of making obvious pro-China policy in fundamental issues. Some argue that one example was Indonesia’s decision to award the Jakarta-Bandung high-speed rail project to China instead of Japan. The decision was particularly controversial, as Japan had completed a feasibility study that took ten years, at a cost of around $3 million. However, this move was much more motivated by the self-interest of economic pragmatism than the decision to appease China.

On the other hand, Indonesia’s stakes are higher when it comes to territorial disputes with China, although not as high as those of Vietnam and the Philippines. The stakes are particularly high when it comes to the resource-rich Natuna Islands, whose exclusive economic zone (EEZ) reportedly overlaps with China’s “nine-dash line,” although Indonesia always maintains that it is not a claimant state. The Natuna Sea holds crucial economic potential with rich fishing waters and natural resources, particularly the East Natuna Block, which contains forty-six trillion cubic feet of recoverable natural gas, one of the world’s largest gas fields. So far, Jakarta has been enjoying its rights to claim sovereignty over the area. In 2010, Indonesia’s state-owned oil company, Pertamina, along with Total, Petronas and ExxonMobil, teamed up to explore the block and estimated that first oil production would kick off in 2021. Besides Natuna’s resources, Indonesia has major interest in protecting sea lines of communication along the South China Sea. Jakarta also has interests in protecting the sanctity of the 1982 United Nations Convention of the Law of the Sea (UNCLOS).

While Indonesia has a major stake in the waters near the Natuna Islands, this does not necessarily mean that the country will be heavily balancing against China—for three reasons. First, China’s threat towards Indonesia’s stake in the Natunas’ waters remains limited, unlike those towards the Philippines and Vietnam. China’s nine-dash line claim threatens 70 percent of Vietnam’s EEZ, and overlapping claims over the Spratly and Paracel Islands have led to heated relations between the two, particularly related to China’s attempted oil drilling and clashes between Chinese vessels and Vietnamese fishermen. For the Philippines, the overlapping claim has also led to several incidents, including when Chinese ships engaged in naval battle with a Philippine gunboat near Capones Island in 1996. Second, Indonesia is still torn between its stake in Natuna and its efforts to maintain a neutral position as an “honest broker” of the South China Sea dispute. Third, Indonesia lacks the financial resources to conduct a large-scale military buildup, particularly under an administration that largely focuses on building domestic infrastructure.