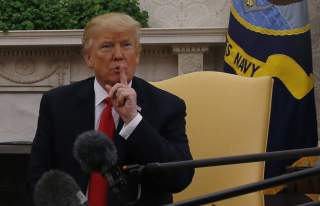 What is reported as “chaos” at the White House does little to explain how foreign and defense policy gets done. In practice, Trump’s team runs well. What the president ought to be doing is more of the same.

What Trump does may appear unconventional to some outside observers, but there’s a reason why it works. The elements of chaos include the instruments of some of the best policymaking of the past.

There’s nothing wrong with fierce debate (including throwing some elbows) among senior members of the national-security team. That was one of the great strengths of FDR’s way of war. At the 1941 ABC-1 talks and the Arcadia Conference after the attack on Pearl Harbor, American warlords agreed on a coalition strategy of “defeat Germany first.” That, however, was only the start of a great and often acrimonious debate on how to win the war.

Good strategy ought to have the lifeline of a guiding idea. Strategy, on the other hand, also has to be dynamic, accounting for enemy actions and conditions on the ground.

Nothing went exactly as planned. Beneath the umbrella of “defeat Germany first,” the top tier of America’s leadership vigorously debated four options. The proposals battered around ranged from maneuvering through the soft underbelly of Europe to letting MacArthur return to the Philippines.

Wartime quarrels were not alternatives to the foundational strategy. They were more a supermarket of opportunities that the Americans could draw from. That made the U.S. approach to global war dynamic and adaptive. Not dogmatically following a linear course to victory was a strength. That practice would not have been possible without open and honest debate among senior policymakers.

There are signs that Trump follows that practice as well. Consider the decision on Afghanistan policy. From the outside, we can count at least three rounds of serious and full debate among the president and his senior team before they hammered out a consensus policy.

In his address to the nation, Trump acknowledged that the final decision went against his own initial assessment of what to do. That would not have happened without the president wanting to hear a serious airing of the issue from his senior team.

Further, the president realized that the first big decision is just the start of the job, not the end of it. What followed Trump’s decision has been a process of adapting and innovating. The administration has already started on the follow-on efforts; pressing Pakistan to change its behavior and developing alternative lines of supply into Afghanistan.

While debate is good, factionalism and backbiting is not. FDR sometimes intentionally created friction among his senior team, pitting them against each other. He once said, “I never let my right hand know what my left hand is doing.”

If policy struggles becomes destructive, however, that isn’t helpful. During World War II, there were some extraordinary leaders beneath FDR who continued to work in trust and confidence, despite their disagreements. The best examples are Army Chief of Staff Gen. George Marshall and Chief of Naval Operations Adm. Ernest King.

King once went to see Marshall to debate strategy. After a frustrating waiting in the outer office, he stormed back to his own headquarters. When Marshall found out that the admiral had been left cooling his heels, he rushed over to King’s office and apologized. He knew the war couldn’t be won if they didn’t work together. King appreciated the gesture. He replied, “I think we can [work together], and we will.”

Not every presidential team, even ones with some outstanding leaders, achieved this level of trust and confidence. Under Ronald Reagan, two fine men, Caspar Weinberger at Defense and George Shultz at State were often at odds. Their intransigence continually frustrated efforts to forge effective policies.

Trump, by contrast, has assembled a talented team of independent, confident leaders who have managed to “storm and norm” on difficult issues. The likes of John Kelly, Rex Tillerson, James Mattis and H. R. McMaster well serve the president. Trump would be smart to keep this proven team together through his first term.

In particular, the administration ought to take every opportunity to trash the trash talk that anybody’s job is up for grabs. The president might consider, for example, giving H. R. McMaster a fourth star now. That would be one way to send the right signal—confidence in the team and confidence that the team is delivering the right stuff.

“Chaos is good,” writer Alice Walker once proclaimed. Still, the value of chaos has its limits. The creativity, innovation, and out-of-the-box thinking that comes from vigorous debate and discussion has limits. In the end, governments have to decide and execute.

Dick Allen served as Reagan’s national security advisor for less than two years—pretty much the only time the Gipper’s NSC worked well. That is because Allen achieved a degree of discipline in the decisionmaking process. Allen managed to crank out many of Reagan’s most important and lasting policies for helping win the Cold War.

Trump’s team, without much notice, has managed to, well, trump every recent presidency in cranking out definitive policies and strategies. In its first year, they plowed through and agreed on plans for dealing with every major threat from ISIS and Al Qaeda to Russia, China, Iran and North Korea. They delivered the most comprehensive national-security strategy in modern times. They recently finished the National Defense Strategy and the Nuclear Posture Review.

They are also wrapping up an Indo-Pacific strategy. It is difficult to recall any modern presidency that pushed out that much policy that fast. This not just a testament to the work and cooperation of the senior team, but to a NSC staff that functions exactly like the president’s staff is supposed to function, efficiently coordinating the work of the interagency team—not trying to run foreign and defense policy out of the West Wing.

No leader was more misinterpreted in his time as president than Dwight Eisenhower. The media often portrayed Ike as a dopey grandpa, sleepwalking through two terms in the Oval Office. And it’s true that he intended his presidency to have a calming influence as the Cold War heated up. He wanted the White House to be perceived as a placid place moving along at a placid pace. But this public face masked what historians call the “hidden hand” of Ike’s presidency. Behind the scenes, he was a forceful hands-on chief executive. Ike was a leader of character. Many contemporaries missed that.

Obsession with the larger-than-life characteristics of Trump’s presidency has overshadowed assessments of his ability as a strategic leader. Trump’s public face is Trump the showman. These characteristics suggest to some that his decisionmaking is impulsive and undisciplined. His character suggests otherwise.

There is a discernable, disciplined pattern to how Trump makes decisions. The president does not pretend to be a foreign- and defense-policy expert. He does see himself as a leader with good common sense. Surrounding himself with a talented national-security team, he challenges them to explain why the United States should just keep following the same old policies that have not produced results and why the administration shouldn’t try something else if the risks are tolerable.

In many cases, after grilling his team, Trump endorses continuity over change—for example, support for NATO and Article V, and getting tough on Russia. On others, he has chartered new courses—such as maximum pressure on North Korea. In some cases, like what to do about the Joint Comprehensive Plan of Action regarding Iran, the decision is still up for grabs. In each case, the choice was the president’s, based on serious input from his team.

A good example of Trump as the decider-in-chief is his call to move the U.S. embassy in Israel. In his view, the common sense was that the peace process was going nowhere, in large part because the Palestinians had no real interest in peace. After rounds of debate, the team could not make the case that just leaving the status quo in place was ever going to accomplish anything or that moving the embassy was not worth the risk.

It remains to be seen whether moving the embassy will make a difference. On the other hand, it’s also clear that there haven’t been any dramatic adverse consequences either. In the end, the president made a deliberate, risk-informed decision—and that, in the end, is what we expect from the character of a real strategic leader.

Steady as She Goes

Having put together one of the most proactive and positive foreign and defense policies in an over a decade, Trump should follow up by following through. He should keep the team he has now, and—as quickly as possible—fill out the rest of his administration’s political appointments so that he has folks in place to implement his policies.