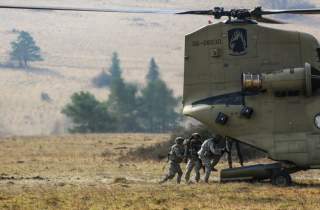 This week the Chicago Council on Global Affairs released the results of their biannual survey of American positions (and dispositions) with regard to the conduct of U.S. foreign policy. The report, entitled “Foreign Policy in the Age of Retrenchment,” examines the results of a survey of 2,108 Americans this May. The headline number showed that roughly four in ten (40 percent) surveyed say that the United States should “stay out of world affairs.” That was the highest percentage of respondents to so answer since the Chicago Council began taking the survey in 1974. Indeed, since 2010, the number of respondents who wish America would “stay out” as opposed to those who wish it to “stay active” has been trending progressively higher; support for the former position has increased by ten percentage points over the past four years, while support for the latter position has decreased by the same number.

At a panel discussion marking the release of the CCGA report at the Woodrow Wilson Center on Monday, I got a sense that the headline number was not exactly what the Council was hoping for. It certainly didn’t meet expectations. In an op-ed for The Hill back in June, CCGA advisory board member Dr. Bruce Jentleson had expected the survey to show that 62 percent of those polled would want the United States to “stay active” (the actual number turned out to be 58 percent). So there was a sense of disquiet among the panelists who were at pains to assure the assembled that the public really and truly does want America to remain the globe’s primus inter pares. Wilson Center president and former Congresswoman Jane Harman implied that the number supporting continued American engagement abroad would have certainly been higher had President Obama been more disposed to using the “bully pulpit.” CCGA president and former U.S. Permanent Representative to NATO, Ivo Daalder, said that while the survey reflects the “common sense” of the American people, support among the respondents for “staying active” likely would have been higher had the poll not been taken before ISIL began to dominate the news cycle.

While the panelists (all of whom could fairly be characterized as part of the liberal interventionist or global Wilsonian camp) were all too aware that the trend line over the past four years doesn’t necessarily indicate overmuch support for their policy preferences, they really needn’t have worried: headline number aside, the survey makes for dispiriting reading. The CCGA report noted that the 2014 survey demonstrates “the essential stability of American attitudes toward international engagement, which have not changed all that much since the Council conducted its first public-opinion survey 40 years ago.” That is only too true. In light of a disastrous decade and a half of war that at times has raged from the deserts of the Maghreb to the mountains of south-central Asia, the American appetite for interventionist policies remains unsated.

According to the report, 52 percent of Americans view maintaining military superiority as a “very important” foreign-policy goal, while a staggering 84 percent see it as “effective” in achieving the foreign-policy goals of the United States. A decade and a half of war and a moribund economy has also done little to diminish the American mania for defense spending: fully 64 percent of those surveyed support either maintaining or expanding U.S. defense spending. Likely unaware that only four of twenty-eight NATO member states spend what the alliance supposedly requires (2 percent of GDP) on defense, 78 percent of CCGA respondents support increasing or maintaining America’s commitment to NATO.

In light of NATO’s 2008 pledge to bring Ukraine into the alliance, it might be worth examining the report’s figures regarding Russia. Among other things, the survey shows that nearly one in three Americans would support American military intervention in Ukraine in the event of a Russian invasion. Those surveyed are also under the impression (widely promoted by the administration) that sanctions do in fact “work.” Nearly two-thirds of respondents consider sanctions at least somewhat effective in achieving U.S. foreign-policy goals. The continuous campaign to demonize the president of Russia on the part of the Obama administration and Washington’s courtier press has also clearly had its desired effect: Russia’s favorability rating is now at its lowest point since the dissolution of the Soviet Union twenty-three years ago.

Other findings indicate that seven in ten Americans would support the use of troops to prevent Iran from obtaining a nuclear weapon, 54 percent would favor sending ground troops to “ensure the oil supply,” and 71 percent would support sending troops to prevent government-sponsored genocide. And the “go-it-alone” spirit of the George W. Bush years has clearly not dissipated either. According to the report “there are no discernable differences in public support for using U.S. troops when multilateralism is not specified vs. in specific multilateral configurations.” Read one way, the survey shows that the respondents would be amenable to sending American troops anywhere in the world under nearly any pretext.

While it might be dismaying that the findings indicate that citizens and policy makers alike share the belief in the wisdom, rightness and efficacy of a militarized foreign policy, it should not be surprising. This is a classic example of what the historian John Lukacs has called “the momentum of opinions, a kind of protracted and long-enduring deadweight.” According to Lukacs, nearly two centuries ago Tocqueville recognized that “the monstrous accumulating weight of public opinion might lead to . . . a tyranny of the majority” can lead to the “often dangerous condition of democratic stagnation.”

If the 2014 CCGA survey is anything to go by, we have more likely than not reached it.