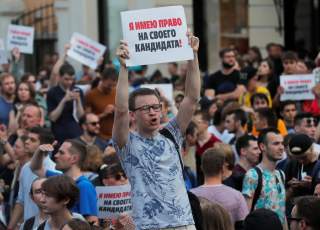 Number three, there is a top, elite club. The nomenklatura is the class that determines everything. They had fought for power and they had that power but then a revolution changed that and they disappeared. Now, the nomenklatura has both power and huge economic assets: banks, airplanes, financial assets. So I can’t imagine that these people will just disappear like before. They will defend their assets and themselves because they cannot flee the country since most of them are on sanctions lists. Nobody will allow them to leave so they have to stay in Russia and keep their power.

Heilbrunn: So what’s the future? If you look at the opinion polls, Putin’s popularity has diminished. There is the restiveness that you’ve talked about in the middle-class. The situation seems to be, if not revolutionary, then at least unstable. What does this imply for Putin’s future tenure as the head of the state?

Remchukov: His key concern now—and, actually, this question has emerged in this year’s elections for the Moscow Duma—is about the elections of 2021 for the Russian State Duma. This is because, since 2003, Putin has led with a constitutional majority in parliament. I don’t understand now how they can sustain a majority in the State Duma in 2021, which is essential for the future of Putin.

This is because only constitutional changes could give him a place on top of the hierarchy— whatever the name of the country. For instance, Russia could combine with Belarus. Then he could serve as the president of that newly united country. Some other options might be to create a brand new political body that he heads such as a state council, whereby he again becomes the Prime Minister and parliament will have the right to determine who will be ministers—not merely approve nominees like it currently does. Such a move would allow Putin to diminish the next president’s power. But these scenarios would be feasible only if they have control of parliament, and the diminishing role of the ruling United Russia party means they will need to elect maybe 75 percent of the members of parliament elected in individual districts.

So I think Putin--or Putin’s political technocrats--are now thinking about this situation and about how to make legal preconditions legitimate for his continuation in power. This is about how to make it look like a transition. In reality, it would not be one.

Legitimacy is the key for Putin as he will try to do this formally within the frame of the law. But that is difficult, because in many regions if you represent an elite, you are challenged right away. So we saw a case in Siberia where the challenger was a housewife who won and now she is the mayor. And how to control it? The government doesn’t have an answer, because as I told you, they don’t have the advantage of good communications with people now.

Heilbrunn: Is it fair to say that Russia is starting to experience an upsurge in the same anti-elite sentiment that is prevalent in Western Europe and the United States? That elites are seen as exploitative and not working in the true interests of the country?

Remchukov: Yes, I think that a counter-elite sentiment is beginning to develop. It is counter-elite because people start to believe all elites only care about themselves and not the people. A specific feature of Russian protests now is that they are not organized by political forces. Think about the people who had the problem of poor garbage collection in Moscow and now this year it is about garbage in other cities. Or it is about the churches and parks for people. Or now people talk about the fires in Siberia where apparently the government does not have the intention to fight those fires. And these are civil society protests.

In fact, political parties were left behind this time--so it is not clear to me which party could become the leader and win all of these protestors. This is because these sorts of protests—for clean air or good water or their right to decide to have a park or a church—are beyond party lines. These needs are very human. And so, at this stage, it is, for me at least, difficult to say which party will capture these sentiments, but the Russian people want more and more involvement in all decisions affecting their lives.

Heilbrunn: Do you believe that the response of the Putin regime leading up to the 2021 elections will be to become increasingly autocratic?

Remchukov: I don’t think it is going to get autocratic because it is not sustainable and people understand that. I know the people who make those decisions and they don't seem that primitive. I think the problem is certain communications within the elite groups in power because any analysis of their initial motivations is becoming more and more difficult.

For example, you might talk for many years about certain Kremlin factions: there are liberals, there are people close to Putin, there are those who are not democratic, and so forth. In my view, it is not enough to talk about the power of those who are personal friends of Putin. It is necessary to look at who is a close friend and who stands behind this or that political move. These moves tend to generate a lot of protests and uncertainty because it is not transparent why someone was changed and what was being done. People who are at this moment in the Kremlin when we’re talking, do not understand how the public in Russia is changing. I don’t think they understand, because I don’t see an adequate reaction.

They think they can handle things in their old-fashioned, customary manner--pouring money into St. Petersburg, building new streets, new subways, and new shopping malls. But is it adequate for the middle class? Because the case in Moscow shows that good streets, fantastic infrastructure, public places, cannot keep them safe from the lure of democracy. And people protest anyway.

A lot depends on if the elite being able to understand how to talk with these people. They do not necessarily need an overwhelming majority to run the country like in the old Soviet days. No, democracy means that you simply have support—maybe by even one vote. And you see in America how you handle a difficult political situation after three years of Trump being elected—he clashes with Congress.

Here’s the deal: if Russian elites want to sustain their power, they need to develop this language of the simple majority rather than an overwhelming majority. The economic issues are very serious and Russian real income hasn’t grown in five years. If statistics show that real income is still not growing, then it will be very difficult to find a new Crimea to conquer to boost the spirits of the people. As I’ve mentioned, this Crimea factor, these Olympics and World Cup factors, these are diminishing in the minds of the Russian people. It will be increasingly difficult to ignore the demands of Russia’s middle-class and young.