Interview with Konstantin Remchukov: Why Vladimir Putin Will Likely Resign In 2024 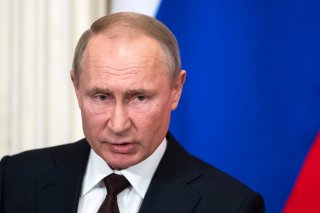 Jacob Heilbrunn: You originally thought the vote on Russian president Vladimir Putin’s extension in office would lead to a less restrictive Russia. But is the reverse occurring?

Konstantin Remchukov: No, my perception is that constitutional changes brought an end to the opposition’s political line, which was called transition. Mikhail Khodorkovsky and Alexei Navalny have been pushing for years ago for a future Russia. They tried to implant in the public mind the idea that the only thing that is worth talking about is a transition from Putin’s Russia. The response from Putin, however, was unexpected, namely, the drastic change in the constitution that allows him to run in 2024. By these legal acts the Kremlin stopped the entire concept of transition.  It’s irrelevant. That was Putin’s idea about how to react to the opposition strategy.

Heilbrunn: Security officials in masks have arrested regional Governor Sergei I. Furgal who was a long-time member of the far-right Liberal Democratic Party. He took office in 2018 and is now suddenly accused of participating in murders. The New York Times says the Kremlin is clawing back power from the regions. Is this interpretation correct?

Remchukov: I don’t think this is about the regions. Our political society is split by two groups. That makes the agenda very simple. You are for or against Putin. Nuances make no sense. You can’t discuss elements of economic policy. Nobody wants to hear that. Many traditional parties have lost importance for the Kremlin. The Communist Party and Vladimir Zhirinovsky’s Liberal Democratic Party are cases in point. The Kremlin doesn’t need traditional, official Duma parties any longer.

Heilbrunn: Zhirinovsky is threatening that his members will resign from the Duma, and declaring that Putin is essentially putting his party in handcuffs and acting like Stalin.

Remchukov: Nothing but words. Duma membership is a crucial condition for their existence. If they quit the Duma now, how is it possible to arrange a good campaign for the state Duma elections in September 2021? They need to be in power. Don’t pay much attention to Zhirinovsky’s statements.

Heilbrunn: So why was Furgal arrested?

Remchukov: The Kremlin wants to remind the governors of their main task. Not to grow their own ratings. But to work seriously and tirelessly on the growing rating of Mr. Putin.

Heilbrunn: Speaking of ratings, the Levada Center indicates that public confidence in Putin has dropped to 25 percent. Moreover, 58 percent of Russians back an age limit for the president set at seventy. Putin is sixty-eight. Do you think Putin will face a crisis?

Remchukov: My prognosis is 55 percent versus 45 percent that he will not run for the presidency in 2024. Let’s face it: he didn’t want to be a lame duck. His thinking was that elites shouldn’t look for a future leader; they should stop thinking about the future. This is Putin’s main obsession. The tradition from Byzantium is to intrigue rather than work. Putin doesn’t want to encourage that. Most likely Putin will quit the job in 2024 and not violate the spirit of the Constitution.

Of course, confidence is dropping. Two-thirds of Russians expect economic conditions will worsen. In this context, it is indeed paradoxical that people vote for Putin. But there are international developments that helped the propaganda drive. In the late 1980s and 1990s, Russians had a utopian view of the future. America was touting the idea of freedom but that ideal is now destroyed. Nor is this all. After years of propaganda, Russians don’t believe the Ukraine model—a struggle for freedom and liberty—is viable, either. In short, it’s better not to move away from the old regime. The third thing that was held up to Russians for many years was the ideal of economic growth from China. They didn’t follow the Gorbachev path and concentrated on economic growth. Now we understand that even Chinese economic growth is not viable—it’s too dependent on American markets. Russians live without any ideals. The political mood of the people is not in favor of upheaval.

Heilbrunn: What about the FSB’s arrest of Ivan Safronov, who was an adviser to Dmitry Rogozin, the director-general of Roscosmos, as well as the crackdown on other journalists?

Remchuvko: The cases might be different. I believe it might be that Safronov has some national secrets if I see what kind of people were involved in arresting him. I know the people involved and they would not get involved if there wasn’t something there.

When it comes to journalists in general, we passed a law against fake news. There is a struggle against the media. We most likely made a decisive move to be with China strategically against this Western world which attacked both regimes. You know China is doing the same thing in Hong Kong that Russia is doing in Russia. The use of legislation by China in Hong Kong is driving the same thing for Russian security services—attack the press and silence them.

Heilbrunn: Is there a general crackdown?

Remchukov: I was talking with a top official in the Kremlin the day after the elections. I asked, “Your victory, does it mean you will move overwhelmingly against the opposition.” The official said, “No, Putin wants a united country. I am more than sure he will say it publicly.” Hours later Putin said he understood the reason of those who voted “no.” I conclude that this is a struggle of different factions inside the Kremlin walls. One person says no oppression. Other groups believe they can create a narrative of oppression and push power to more reactionary groups. Their lives and prosperity of many people in the Kremlin depend on how much political isolation of Russia from the West takes place. There is a struggle between lines.

Heilbrunn: But overall you remain optimistic?

Remchukov: Khodorkovsky said that the strategy of transition is over. The tactics need to be protests and people on the streets and people who ready to be arrested. If the Kremlin makes mistakes—and when you do something you always make mistakes—and if the economic situation doesn’t improve, it could push Putin to a more authoritarian type of rule. In the last five years, the opposition provokes and then there is reactionary legislation.

Russia is different from what it was in the 1990s. Private businesses were extraordinarily efficient. We never lacked anything including water and toilet paper. The demolition of the Soviet Union started with a lack of water, soap, sugar. Today Russia is different. The problem is that politically it has become tense. It’s like you lack oxygen. You’re in high altitude with little oxygen. The intelligentsia talks in the kitchen about these matters, but we don’t know how many years this political regime will prevail. There is no ideal of what other path Russia should follow. Not America. Not Ukraine. Not China. Russia sticks to its old, anti-Western way—which is close to Putin’s ideal.

Konstantin Remchukov is an authority on Russian politics and the proprietor and editor-in-chief of Nezavisimaya Gazeta. He is also the chairman of the Moscow Public Chamber, a top advisory body to the city government. You can follow him at: @KVRemchukov.