Interview with Opposition Leader Sviatlana Tsikhanouskaya: “There’s No Way That People Will Give Up” In Belarus 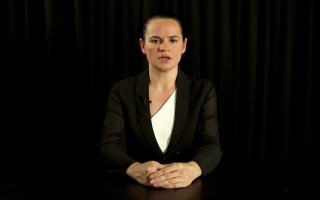 On August 9, Belarusians went to the polls to elect a new president. Incumbent President Alexander Lukashenko triumphed but he cheated massively to come out on top. Massive street protests in Minsk have ensued. Sviatlana Tsikhanouskaya, the ostensible winner of the Belarusian presidential poll, spoke with Franak Viačorka from a hotel in Vilnius, Lithuania, and via Skype with Melinda Haring on September 3, about her expectations for the protests that continue to roil the capital and beyond. The interview has been shortened and edited for clarity.

Question: How can Lukashenko be convinced to allow another round of elections under the watch of the OSCE [Organization for Security and Co-operation in Europe] or a legitimate international organization?

We don’t need Lukashenko’s permission at all because people don’t consider him legitimate. There is no need to ask him.

Question:  How do you force Lukashenko out?

Sooner or later, he will have to leave because our people will not be able to accept him. They will never be able to work with him. They do not trust him. He will never be forgiven. All these crimes will not be forgotten. Only protests and strikes [are] the guarantee that he will leave sooner rather than later…we will fight as long as it is necessary.

Question: Isn’t time on Lukashenko’s side? And the Russian’s side?

People will never give up this year. We will continue striking until he leaves.

Question: How do you know that?

Because I know the Belarusian people.

Question: What changed in the last ten years?

Young people are braver than the older generation…A point of no return has passed, and we will never allow it to return to the state it was in for the last twenty-six years.

Question: How will the opposition withstand another crackdown?

I ask you not to call us the opposition anymore because we are the majority. What I know is that our people are willing to stand to the victory. We don’t know what is on Lukashenko’s mind, but we are willing for anything [to happen], although we don’t want anything to happen. We want to solve this problem peacefully.

Question: What do you make of reported splits within the opposition?

We are still together, we are not going to split up. I think you are talking about the new party, yes?

[On August 31, Belarus opposition leader Maria Kolesnikova and the team of jailed opposition figure Viktor Babariko announced they were forming a new political party called Together. Kolesnikova, Tsikhanouskaya, and Veranika Tsapkala banded together to oppose Lukashenko in the August 9 election.]

It doesn’t influence our aim toward new elections.

Question: Would you agree to another election with international monitors?

Of course. We invited every possible country to observe our elections.

Question: Would you agree to another election with Lukashenko as a candidate?

I don’t think he has a moral right to participate. He has to understand that people will never accept him as a president or as a candidate.

Question: When will you go back to Minsk?

I will go there as soon as me and my children feel safe.

Question: Are you willing to talk to the Kremlin?

We are open to dialogue with any country, of course.

Question: What outcome do the Russians want in Belarus? How likely are they to invade?

You know I really don’t know what outcome they want. We can assume but what matters is the outcome Belarussians want. It’s absolutely our internal affairs, not an external one…It would be a great mistake from Russia’s side [if they invaded].

Honestly, I don’t know. Perhaps they have common values. And Putin is used to Lukashenko. They have a common language. I heard an opinion that Putin doesn’t want Belarus [to become] democratic. I hope he understands that a free and stable Belarus is in the interests of Russia too.

Question: What is happening to the National Coordination Council?

I created the National Coordination Council to be the platform for negotiations and for a peaceful resolution of the political crisis. However, Lukashenka shows by all means that he doesn’t respect the will of people, and he doesn’t want negotiations. But he doesn’t have a choice. If one thing doesn’t work, we will try something else.

Question: Will the protests continue?

Protests will continue anyway. They will change forms. New people will join. There’s no way that people will give up. This is already a matter of principle. This is a genuine popular uprising.

Melinda Haring is the deputy director of the Atlantic Council’s Eurasia Center.

Franak Viačorka, a native of Minsk, Belarus, is a nonresident fellow at the Atlantic Council’s Eurasia Center.