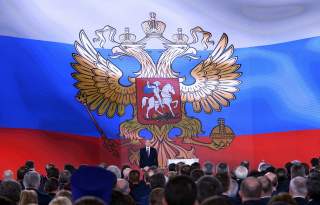 Paul Saunders: You said recently that the confrontation between the United Kingdom and Russia over the poisoning of Sergei Skripal and his daughter in Salisbury could lead to “the last war in the history of mankind.” What did you mean by that?

Evgeny Buzhinsky: I’m sorry, but the BBC correspondent understood me incorrectly. It is not between Russia and the UK: it is between Russia and the so-called collective West, led by the United States by the way. This incident was a crime. In investigating this sort of crime, any investigator must ask some questions: who stands to benefit? What’s the motive? For President Putin, believe me, he is the last man on Earth to try to do such a terrible thing on the eve of the Russian presidential elections and the eve of the soccer championship in Moscow. This is a blatant provocation, but what is the aim of this provocation? I don’t know if you’ve heard the “breaking news” that the British military laboratory said that there are no clues that indicate that this poison is of Russian production, which is not surprising to me. So no proof, no evidence, yet the British government said that “we collected information”—what information?—“and on the basis of that information we are sure this crime was committed by Russians.”

The question always asked these days if this is a new Cold War or a second Cold War. I always state that its worse! In the time of the Cold War, everything was clear: an ideological confrontation, but there were definite truths, definite red lines, no threats, no sanctions. No cases such as recently, with U.S. Senator Lindsey Graham has called to press Russia, to isolate Russia, to economically corner Russia. In my view, it is a very dangerous game to try to corner and isolate Russia.

Paul Saunders: In your statement though, you seem to suggest that you see a possibility of a real military conflict between Russia and the West. How do you think something like that could come about?

Evgeny Buzhinsky: The first place where such a conflict could come about is in Syria. Recently, some days ago, when the Russians spoke to Dunford [Chairman of the Joint Chiefs of Staff Gen. Joseph Dunford] after the Americans threatened to strike the center of Damascus, and Russia made a public statement that if the United States strikes the center of Damascus, where Russian servicemen are located, where the headquarters where Russian police and advisors are, then Russia will strike back against the cruise missiles and the carriers of the cruise missiles. In my view, this is very dangerous since U.S. cruise missiles are launched from warships.

Paul Saunders: So you view that statement by Gen. Valery Gerasimov, the chief of the Russian General Staff, as a very serious threat?

Evgeny Buzhinsky: Yes, it’s serious. And I don’t think he was joking or just making a statement to surprise some Americans. No, I am absolutely sure he was serious.

While we’re on Syria, there is the subject of chemical weapons. I do appreciate that our gathered intelligence indicates and can warn the world that terrorists, not the Syrian government, are the ones deploying chemical weapons in certain locations in provocative attacks. This results in TV crews being in the right place at the right times, preventing such provocations. But I think that with such confrontational circumstances that the United States could decide to strike Damascus.

Paul Saunders: And in that situation, the Russian military would follow through on General Gerasimov’s statement? Many people in the United States would say to themselves that Russia has a really powerful military force, but President Putin is ultimately a very pragmatic person who knows that Russia’s economy is less than 5 percent of the combined U.S. and European economies and he would never risk a war like that.

Evgeny Buzhinsky: In the case of war, the economy doesn’t matter. 5 percent, 2 percent, 3 percent, it doesn’t matter. Because if it ends in war, it will be a very very short war. Do you think that Russia will go to war with United States for months or years? Of course not.

Paul Saunders: Are you suggesting it would become a nuclear war or it would end very quickly because of the nature of modern warfare and the conventional weapons at the disposal of the United States and Russia?

Paul Saunders: Do you see any dangers elsewhere apart from Syria?

Paul Saunders: Turning back to the dispute surrounding Mr. Skripal, the United Kingdom called for solidarity among its allies. Most of the NATO countries also expelled Russian diplomats. The United States certainly expelled a very considerable number and also closed the consulate in Seattle. What impact do you think that had inside Russia? What message did the Russian government and the Russian people take from that strong, coordinated response?

Evgeny Buzhinsky: First of all, I repeat: what happened with Mr. Skripal was a planned provocation. I don’t know if the UK was alone in planning this, but it is a clear-cut provocation attempting to demonize and isolate Russia. To find a pretext for expelling Russian diplomats. This is why I am unsure where this confrontational path can lead. What would be next? For example, now the United States is thinking about their response; they will expel another round of Russian diplomats. Russia would expel another fifty. Then the United States would expel another fifty. After that, then what? A freezing of diplomatic relations?

Paul Saunders: Turning back, you mentioned the idea that this all started with a British provocation, and it certainly seems to be a widespread view in Russia that this was some kind of provocation, what do you think would be the motive of the British government to do something like that?

Evgeny Buzhinsky: Well, no offense meant, but I believe that move by Theresa May was coordinated with Washington. A lot of Russian experts and observers think so. What was the motive? I don’t know, maybe it was an attempt to divert attention from the internal problems that Theresa May is facing. For example, what was the first item on the agenda during the last EU summit? Brexit terms, including conditions that aren’t favorable for Britain. And after this provocation? Russia, with discussions about European solidarity against it instead of talking about Brexit. Maybe that was the real motive.

Evgeny Buzhinsky: I must tell you frankly: I know some people from our intelligence services, and they’re very concerned. Because Mr. Skripal was exchanged via the illegal program spy swap, there is a worry that this could endanger or ruin the entire mechanism of exchange. What is the use of this mechanism if people will be killed afterwards? On the Russian side, there is no motive whatsoever. On the British side, we can only guess.