Interview With Richard Burt: The Dangers of Withdrawing from the INF Treaty 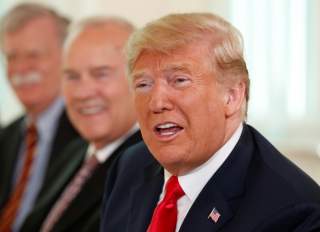 On Tuesday, National Interest Editor Jacob Heilbrunn interviewed Richard Burt to discuss the impact of the Trump administration’s declaration that it intends to withdraw from the 1987 Intermediate-Range Nuclear Forces (INF) Treaty. Burt, who is a partner at McLarty Associates and chairman of the National Interest’s Advisory Council, has enjoyed a distinguished diplomatic career. During the Reagan administration he served as Assistant Secretary of State for European and Canadian Affairs before becoming U.S. Ambassador to Germany in 1985. He has been intimately involved with arms-control issues throughout his career; in 1989, President George H.W. Bush appointed him chief negotiator for the Strategic Arms Reduction Treaty between the U.S. and Soviet Union. The Trump administration’s decision to withdraw from the INF Treaty, which national security adviser John Bolton reiterated today during a visit to Moscow, is evoking fears of a recrudescence of the nuclear arms-race that characterized the cold war, when each superpower vied for nuclear superiority over the other and created fears of the annihilation of mankind. So what are the actual implications of Trump’s audacious move? Burt offers a sweeping assessment below.

Jacob Heilbrunn: What is the best way to analyze President Trump’s move?

Richard Burt: I think that the way to think about this is at two different levels. One is political and the other diplomatic. The way the administration has approached this decision is simply atrocious. For a start, you don't make a significant decision like this in the aftermath of a political rally in Denver and not provide any kind of context to the public. Furthermore, there was clearly very little consultation, if any, with key allies. There may have been some discussions, lower level discussions, with people in the defense ministries and stuff like that. But with a treaty as important as this you really ought to have had some outreach at the head-of-government level and consultations with foreign ministers so you can take your allies views and interests into account. And there was also apparently very little outreach to the Congress. In short, it was just a very flawed piece of foreign policy and diplomacy.

The result of this is that a decision based on Russian violations of an important arms control treaty has morphed into a big U.S. foreign policy mistake around the world. And the U.S., not Russia, receives the blame for what's happened here. There were many things that the United States could do if it wanted to leave the treaty. For example, it could have told the Russians that they needed to come into compliance within six months and, if not, the United States was going to deploy new nuclear-capable aircraft into Europe to offset this small force of cruise missiles. And that it would continue to do that until or unless the Russians complied.

It could have taken the kind of arms control technical approach and said, “let’s stop talking about this issue but instead send our experts. Let’s send American experts to your test site, let them see the missile, let them explore the technical issues, the capabilities of the missile so you can explain to us why this is not a violation. Meanwhile, you have problems with our Romanian anti-missile system; we’ll let your experts come and look at the launcher which you claim can be used to launch offensive missiles.”

So there were a variety of things that could signal to our allies in particular, but the world more broadly, that we were willing to go the extra mile to preserve this thread. But we failed to do that. So once again the United States was perceived as leaving trade pacts with the Asians, the JCPOA with Iran, the Paris Climate Accord, and now the INF treaty. So from a diplomatic standpoint, it was a very big failure.

Heilbrunn: But is this the Bolton-Cheney view of the world?

Burt: Let me get to that because that is going to raise a second major problem and a deeper problem with this decision. The INF wasn’t just created in this period of thaw in the U.S.-Soviet relationship in the 1980s. It was the end result of a decade of nuclear crisis in Europe when the Russians started deploying—in the late 1970s—a lethal new intermediate-range missile, the SS-20, which held the Europeans hostage. Our response to that was to both deploy new missiles ourselves, ground-launched cruise missiles and the famous Pershing II, but also to seek an arms control outcome. The argument, the reason why we responded that way, was that the perception in Europe—and in some corners in Washington—was that a gap in deterrence was opening up. That the traditional U.S. strategy of extended deterrence—that is not only deterring Russian nuclear strikes on the U.S. homeland but also their ability to attack Europe—was weakened by the deployment of this new intermediate-range missile. The INF closed that gap in deterrence and solved that military problem.

Heilbrunn: Which had originally been highlighted by German chancellor Helmut Schmidt in London at the International Institute for Strategic Studies.

Burt: Exactly. In a famous speech he gave in 1977, which led to the NATO decision—the so-called double-track decision—in 1979. We are now in a situation where we could once again face a deterrence gap. Here’s why: if we walk away from the INF treaty, Moscow will be free to deploy this new cruise missile, the SSC-8, as well as a new intercontinental-range ballistic missile which can be easily adapted as an intermediate range system. So once again we will face a situation where we will have to decide how we are going to address this gap—at a time when U.S.-European relations are much more fragmented and under even greater stress than they were in the early 1980s.

The irony of all of this is that the Russians themselves were conflicted about the INF treaty. The Russian military has been lobbying against the INF Treaty for over a decade. We live in the Western Hemisphere and thus don't face any direct nuclear threats from our neighbors. But the Russians face a proliferation of nuclear threats around their periphery and they felt that they’re hands were tied by the INF Treaty, and that they couldn't respond with their own intermediate-range forces.

So I'm sure once the Russian General staff heard of Trump’s decision there were celebrations. But I think the political leadership still likes the idea of U.S.-Russia arms control because it provides the sense that the Russians are a coequal superpower and gives them a certain amount of status. But by and large, this was the one arms control treaty you could point to that clearly favored American interests as opposed to Russian interests. So it’s bizarre that President Trump and John Bolton have sabotaged it.

Heilbrunn: But Bolton’s idee fixe, and Trump’s “America First” rhetoric, would suggest that this is fully consonant with their vision of American foreign policy—of an unfettered, unilateralist power that has no permanent alliances anywhere in the world and can act as it wishes, wherever and whenever it pleases, to stop someone it deems an adversary. Isn’t that really the Dick Cheney view of the world? Bolton and Trump essentially are not isolationists; they’re unilateralists.

Burt: I agree very much that they are unilateralists. And the United States always has to retain the capability to act unilaterally if necessary. But in an era when Chinese power is growing, and the Russians are resurgent, and there are other powers emerging in the international landscape, I think that the United States needs allies and partners more than ever before. It is the one key advantage we have over both the Russians and the Chinese. So this strategy of unilateralism, in my judgment, does not reflect a clear understanding of what our interests are in what is emerging as a truly multipolar system. On the one hand, we can't be a liberal hegemon as we tried to be after the Cold War; we don't have that capability. On the other hand, to move to the other end of the spectrum and be completely unilateralist also creates a new range of very serious risks.

Heilbrunn: Is the United States becoming a rogue state by ripping up all of these treaties?

Burt: Rogue may, in fact, be too strong a term. But we are certainly becoming a highly unpredictable state and a state that is not only difficult to do business with but also to trust. And that is a very serious development because there are very important countries—to name just a few Japan, Germany, France, Britain, potential new partners like India, that we are going to need to rely on in the future if we’re going to protect our interests. If they don’t trust us, if they find our policies too unpredictable, then we’re going to lose important influence in the world.

Heilbrunn: If you were Kim Jong-un, would you sign a nuclear arms agreement with the United States after these moves?

Burt: If it was the nuclear agreement Kim Jong-un seems to want, then I would because it doesn’t appear to contain much substance if it is all smoke and mirrors. But, no it’s going to be very hard for countries in the future to enter into agreements with the United States. They’re going to have to think twice. And that goes for other existing treaties now that the INF treaty domino has fallen. The next question is: what is the future of New START? Do we want to be in a position where intercontinental-range systems—bombers, submarine-launched ballistic missiles, land-based missiles—are unconstrained? And do we need at this point, when the preeminent strategic challenge facing the United States in the twenty-first century is China, well, do we want to be distracted by a new strategic arms race with the Russians?