Interview with Russian Ambassador Anatoly Antonov: “We Have to Fight Lies and Fake News Virtually on a Daily Basis.” 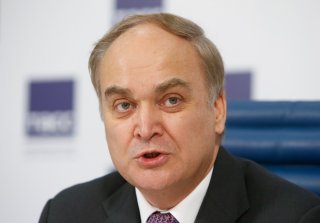 Heilbrunn: President Vladimir Putin has recently published a new essay on Ukraine stating that Ukrainians and Russians are the same people. He also indicated that there are red lines that neither Ukraine nor NATO would be allowed to cross. Some say Putin is laying the groundwork for tougher action on Ukraine. Have you communicated anything like that to the Biden administration?

Antonov: The article of the President of the Russian Federation Vladimir Putin had a huge resonance in Washington. For many here, it was a new look into relations between Russians and Ukrainians, an opportunity to learn the roots of the people. Unfortunately, there are ill-wishers who deny the good, especially when it comes to Russia. They try to pervert the picture—to present the article as if it were an ultimatum against the independent nation. We have to acknowledge that there are many representatives of the administration who share this view. They ignore the main thesis of the Russian leader that a true, real and strong sovereignty of Ukraine is possible only in partnership and good relations with Russia.

We have to fight lies and fake news virtually on a daily basis. Before the article was published, we had faced a smear campaign from politicians and experts with regard to the talks between President Putin and President Biden in Geneva. As you know, the heads of our countries constructively discussed the intra-Ukrainian conflict. They agreed that the Minsk agreements serve as the sole framework for political settlement of the conflict in Donbass. Instead of working on ways to implement the Minsk arrangements, certain State Department officials blame Russia for all the troubles in Ukraine and label my country an “aggressor.”

We have repeatedly warned the administration that such counterproductive statements have nothing to do with reality. Solutions can be found only through diplomatic means without propaganda. Right now the United States can influence the government of Ukraine by encouraging it to engage in a substantive dialogue with representatives of Donetsk and Lugansk, withdraw heavy weapons from the line of contact, and undertake concrete and tangible measures with regards to the autonomous status of Ukraine’s southeast.

Heilbrunn: The United States and Russia have agreed to start a new dialogue on cyber issues. What is the progress in this area and do you see any grounds for optimism after years of sharp disagreements?

Antonov: The agreement to launch a dialogue on cybersecurity is one of the key outcomes of the Russia-U.S. summit in Geneva. Experts from both countries have already started to communicate. Russian and U.S. Security Councils provide overall coordination.

For now, there have been several rounds of consultations, and it is definitely an important and promising sign. American colleagues, however, prefer to focus discussions mainly on ransomware activities, while cybersecurity is much broader. I hope that this dialogue will acquire a comprehensive character in the near future. As an option, we can debate on cyber threats to arms control systems, etc.

It is obvious that our countries equally suffer from cybercriminals. The cases of recent attacks against the healthcare system of the Voronezh region in Russia and the Kaseya company here in the U.S. just confirm that.

We have consistently sought to establish professional cooperation on cybersecurity issues in Washington. In particular, since 2015, we have taken six attempts to launch such interaction. Moreover, on September 25, 2020, the president of the Russian Federation, Vladimir Putin, proposed a comprehensive program of measures to restore Russia-U.S. cooperation in the field of International Information Security (IIS). Unfortunately, there has been no official reaction from the United States so far.

By the way, requests of the Russian competent authorities regarding cyber-attacks also remain without reaction from the U.S. side. There were forty-five of them in 2020, and thirty-five in the first six months of 2021. For our part, we fully satisfied ten requests from the United States last year and two appeals in the first half of the current year. This indicates that we have a lot to work on.

We would like to reiterate that Russia is ready for honest and mutually beneficial cooperation, without politicization and hidden agendas. We take a responsible approach to cybersecurity issues. In this context, we are proud to announce that our country has become the first state to develop and submit to the UN a draft Convention on Countering the Use of Information and Communication Technologies for Criminal Purposes. The official presentation of the document took place on July 27 in Vienna.

One more thing to mention. Almost every day we deal with media materials about hacker attacks, which are allegedly carried out from the Russian territory. Evidence is never provided. Such issues should be raised not by reporters, but professionals. American colleagues if they ask for it can count on rapid and high-level assistance from the Russian side. Our National Computer Incident Response and Coordination Center is ready to cooperate closely.

Heilbrunn: How do you assess the perspectives of the Russia-U.S. strategic dialogue?

Antonov: A myriad of problems has accumulated in arms control and strategic stability over the past ten years. Irrespective of the political conjuncture, complex bilateral negotiations are needed to resolve them.

The issue of overcoming the crisis in this area was one of the key topics at the kick-off Russian-U.S. meeting on July 28 in Geneva. Representatives of the two countries exchanged their perceptions of the direction it is necessary to move in to reduce strategic risks. Despite the considerable differences in approaches to many matters, both sides demonstrated their willingness to engage in a regular and constructive dialogue and seek common ground. It is definitely a positive sign. Nevertheless, we are at the very beginning of a long road. The difficult work before us is to restore trust in this sphere.

I would like to emphasize that the Russian side is open to discussing any arms control issues. There are no taboo topics for our country. We are ready to consider the concerns of the United States with regard to Russia’s newest strategic systems.

However, such conversation should not be a one-way street. It is necessary for U.S. counterparts to heed our claims too, and take into account Russia’s national security interests. Dialogue cannot be fruitful without an equitable exchange of views.

Heilbrunn: You have returned to Washington after the Geneva summit a month ago and your U.S. counterpart John Sullivan has returned to Moscow. Do you have anything positive to report, particularly on the contentious issue of the work of the embassies in the two capitals? Are there any new developments on the status of the U.S. and Russian consulates which were closed in recent years?

Antonov: Unfortunately, the situation does not change for the better. Russian diplomatic missions in the United States are still forced to work under unprecedented restrictions that not only remain in effect, but are stepped up. Regardless of the Biden administration’s declarations concerning the important role of diplomacy and willingness to develop stable and predictable relations with our country, the Russian diplomatic presence experiences continuous strikes.

U.S. colleagues get persistent and creative in this business. The expulsions of diplomats are implemented under far-fetched pretexts now and then. Last December the State Department unilaterally established a three-year limit on the assignment period for Russian personnel in the United States that, as far as we know, is not applied to any other country. Moreover, we received a list of twenty-four diplomats who are expected to leave the country before September 3, 2021. Almost all of them will leave without replacements because Washington has abruptly tightened visa issuing procedures.

It has gotten to the point where the U.S. authorities cancel valid visas of spouses and children of our staff with no reasons provided. The widespread delays in renewing expired visas are also aimed at squeezing Russian diplomatic workers out of the country. As a result, about sixty of my colleagues (130 together with family members) cannot return to their motherland even under urgent humanitarian circumstances.

We have shown restraint for a long time but after another wave of aggressive sanctions by the United States in April we were obliged to take additional steps to equate conditions of work for U.S. missions in Russia, including a prohibition to hire local personnel. It is certain that nobody benefits from such a situation. There is a need for solutions based on the principle of parity. We are convinced that the easiest and fastest way to do it is to completely repeal all the measures and countermeasures which are constraining the activity of diplomats.

Washington does not show a readiness to take such a decision while trying to secure unilateral advantages for the American side. The same is true about the prospects of resuming the work of the Consulates General of Russia in San Francisco and Seattle which were closed by coercion. Even temporary access of maintenance teams to the confiscated premises of the Russian diplomatic property is still denied, which leads to a further deterioration of conditions there.

We hope that common sense will prevail and we will be able to normalize the life of Russian and American diplomats in the United States and Russia on the principle of reciprocity. Our presidents agreed in Geneva to continue consultations between the Ministry of Foreign Affairs of Russia and the State Department with a view to resolve this problem.