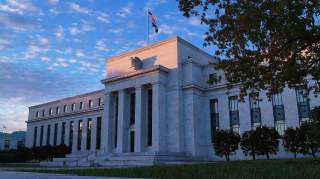 If the Federal Reserve’s recent rhetoric is to be believed, we are in the twilight of its Great Recession intervention. In the midst of the crisis, the Fed bought up assets in what was called an “unconventional” monetary policy maneuver. These purchases eventually exceeded $4 trillion, which is roughly a quarter of the United States’ economic output. To maintain this stimulus, the Fed promised not to shrink its stockpile—at least for a long, long time. Now that time has apparently arrived, and some commentators fear the potential consequences. But there is little reason to fear.

It is a misnomer to refer to quantitative easing as “unconventional.” Central banks have long used quantitative easing, or other policies that utilize their balance sheets to buy assets, to achieve monetary policy objectives. The Fed did so during the Great Depression, to cap yields on U.S. debt following World War II, and to undertake “Operation Twist” during the Kennedy administration. And the Fed is not alone in its use of these unconventional policies. Nordic countries did so in the 1990s, and the Bank of Japan purchases a wide variety of assets regularly. The fact of the matter is that these tactics have been used often with varying degrees of success.

Granted, before the 1980s and 1990s, central bank asset purchases were predominantly utilized to finance government deficits during wartime. The reasons for doing so are now centered on combatting financial crises and boosting aggregate demand. The reasons for asset purchases and unconventional policies have drifted, but using them is not a new policy tactic.

While the Japanese experience is commonly cited as a failure of these not-so-unconventional policies, there are also examples of effective use. In the early 1990s Sweden successfully undertook an unconventional policy before unwinding it. It is also forgotten that the Bank of Japan was unwinding its own. It was the onset of the Great Recession that caused Japan to reverse course—a case of impeccably poor timing.

Central banks typically unwind these policies over a long period. For the Fed, it will be a prolonged process. Notably, if history is any guide, the unwinding has not been too disruptive to economic growth—only minor drags on economic growth and inflation. Granted, the sheer size of the Fed’s purchases may test these findings, but it should give the alarmist a bit of pause.

One worry is that the end of these policies will cause long-term bond yields to spike. The Fed’s purchases reduced the “term premium” (compensation to an investor for taking the risk of buying a longer-term bond), therefore pushing yields lower. But as it stands, the stimulative impact of the balance sheet on bond yields has already been waning. And, as the Fed continues to hold those assets, the impact will continue to fall.

Inflation, and the threat of it rising, is the primary risk an investor is compensated for through the term premium. This is why, as the Fed backs away, the term premium—and therefore longer-term bond yields—will be even more closely tied to inflation and inflation expectations (specifically shocks to it).

It is therefore worth noting that inflation is not threat at the moment. Not to mention that the Fed is raising short-term interest rates and the U.S. economy is not accelerating. And as the Fed tightens its policy, inflation will be more difficult to stoke.

In a way, this is an optimal backdrop to roll-off the final remnants of crisis era monetary policy. Not because the U.S. economy is accelerating. Somewhat just the opposite. With inflation pressures tenuous and tightening monetary policy, yields on longer-term debt are unlikely to shoot higher.

A few developments could alter the equation. The Trump administration’s promised regulatory and tax reform would change the calculus by spurring economic growth and stoking inflation pressures. But, while there is some probability these will materialize, it is difficult to make a proper assessment without the details. And it may be a long way off.

For the past century, quantitative easing style unconventional policies have been a tool for central banks. This will not change, and—more likely—is becoming a staple of U.S. and developed world monetary policy. During the next recession, it will either be utilized or threatened again. By reducing the amount of assets—mostly mortgages and U.S. government debt—the Fed regains its capacity for the next time it needs to stimulate the economy.

And with the effects of quantitative easing quickly waning anyhow, there should be little direct effect on growth and inflation from removing its final vestiges. There could be some idiosyncratic problems in the mortgage market as the Fed ceases to be the largest buyer, but some pains are inevitable.

As it all ends, it is not a given that longer-term yields will rise. That fear is overblown. Inflation is what truly matters, and there are few reasons to believe that tightening monetary policy on the short end will do anything other than push those expectations lower, keeping longer term yields in check. It is time to stop worrying.