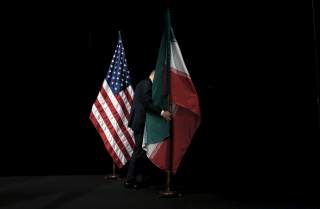 Faced with an unpredictable administration in the White House, former rivals in the Middle East are sitting together at the negotiating table. The United Arab Emirates, once eager to push Washington to confront Iran, is now working to diffuse tensions in the Persian Gulf.

Emirati and Iranian officials sat down in Tehran last Wednesday for the first high-level bilateral talks since 2013, reportedly hammering out a memorandum of understanding between their respective militaries.

“What we are seeing is a process of reciprocal, tit-for-tat de-escalatory steps between the Emirates and Iran,” said Randa Slim, founding director of the Initiative for Track II Dialogues at the Middle East Institute. She said the current moves are “reversible” measures aimed at “testing the waters of whether a shift in the relationship is possible.”

Iran and the United States have been steadily escalating since the Trump administration announced a “maximum pressure” campaign aimed at strangling the Iranian economy. On June 26, the two powers came close to war, after Iranian forces destroyed a U.S. surveillance drone. President Donald Trump was, in his words, “cocked and loaded” for a military strike that night, but changed his mind at the last minute.

But the UAE has been surprisingly silent, refusing to blame Iran for a set of oil tanker explosions in May and June that U.S. officials called a campaign of Iranian sabotage.

This is because Emirati officials have been privately reaching out to Iran, looking for an opportunity “to start changing the course in the confrontational relationship that has been in place now between the U.A.E. and Saudi Arabia and Tehran,” Slim claimed.

Slim, who has been involved in backchannel diplomacy across the region, told the National Interest that last week’s talks were “not the first high-level meeting between Emirati and Iranian officials. I think, based on my information, there have been many meetings before between senior level Iranian and Emirati officials that date back now for months.”

For decades, Iran’s strategy has been “to split members of the Arab side of the Persian Gulf,” said Behnam Ben Taleblu, a senior fellow at the Foundation for the Defense of Democracies. “If you take this paradigm that the Iranians themselves have come up with, which is the four B's—[National Security Advisor John] Bolton, [Emirati crown prince Mohammad] bin Zayed, [Israeli prime minister] Bibi [Netanyahu], and [Saudi crown prince Mohammad] bin Salman—I think Iran is looking to weaken some of these B's and their role in the max pressure campaign.”

“Max pressure needs diplomatic wins, and what will underpin the diplomatic wins is localized consensus for a sustained period of time against Iranian bad behavior,” Taleblu told the National Interest. “The ultimate macro-level strategic goal for Tehran is to have a Persian Gulf free of foreign forces, and it's difficult for Iran to do that if the local countries on the other side of the Gulf often desire the presence of foreign forces.”

Last month, the UAE announced that it would begin to withdraw its military from Yemen. Saudi and Emirati forces are backing President Mansur Hadi against the rival Houthi government that controls the Yemeni-Saudi border. The Saudi-led campaign has killed tens of thousands of civilians, but Saudi Arabia blames Iran’s support for the Houthis for escalating the civil war.

“It's partly driven by the realization that the Yemen war is unwinnable, and there needs to be some kind of exit strategy for the UAE, and eventually Saudi Arabia in Yemen, and that exit strategy will require some collaboration with the Iranians,” Slim explained. She says that Iran reciprocated with a recent Houthi decision to stop targeting Emirati ports or airports in its campaign of missile attacks and sabotage that has wreaked havoc on Saudi infrastructure.

“Iran’s control over the [Houthi movement] is far overstated. Clearly, they are supporting them,” argued Trita Parsi, executive vice president of the Quincy Institute. “But [the Houthis] are their own independent organization and on important occasions, U.S. intelligence knows that they disregarded Iran’s recommendations.”

Nonetheless, the Emirati drawdown is a break from Saudi Arabia, perhaps the most enthusiastic supporter of the Trump administration’s “maximum pressure” campaign against Iran.

“Although you have had official accounts saying that this decision is being coordinated between the two countries, I don't think that the Saudis were pleased with the UAE decision,” Slim claimed. “I think the Saudis were informed of the decision before it happened, but they were not on board with the decision.”

“Obviously, this is not pleasing the Saudis, who are now abandoned and alone, but they were also the main driving force behind some of these really destabilizing policies, and they should pay a price for it,” Parsi commented.

Fear of “paying a price” may be driving the change in policy. According to a report by a state-run news agency in Turkey, a rival of the UAE, the Emirati crown prince Mohammad bin Zayed Al Nahyan attended a meeting to shift his kingdom’s foreign policy shortly after the June 26 drone incident. When asked for comment, the Emirati embassy in Washington directed the National Interest to email the Ministry of Foreign Affairs, which did not respond to a request for comment as of press time.

“The perception in the region I think has been clear: that the pressure that the UAE and Saudi have put on the United States to go to war with Iran is likely not going to pan out, but it may lead to a scenario in which the UAE and Saudi [Arabia] itself is going to be thrown into a war with Iran, without U.S. backing,” Parsi said. “Once that realization came in, fascinatingly enough, the UAE really became passionate about diplomacy.”

“But as long as the UAE thought that it could rely on the U.S. to back it up with its military force, the UAE and Saudi [Arabia] had no interest in resolving conflicts diplomatically, and actually were getting, in their perception, a green light for their reckless policies and provocations,” he added.

Slim disagreed, claiming that even with U.S. backing, “the first party to pay the price for [war] will be the UAE, being caught in between the Americans and the Iranians.”

“The last thing they want is a military escalation, and they were feeling that there are people in DC, in the White House, [who] wanted to go beyond a maximum pressure strategy of economic sanctions, diplomatic pressures, into an actual military confrontation with Iran,” she said.

Either way, America’s indecision is forcing regional powers to rely on their own strength, Parsi said, which has “created a window of opportunity for regional diplomacy between the regional actors, indigenously driven.”

“Whereas we have always felt that we need to work on the U.S.-Iran level in order to lead to [diplomacy on] the regional level,” regional powers are now leading the way, Slim claimed. “Whether America will be involved or not, it is still too early to tell, but it might be the case that we might have to first focus on a region-wide dialogue before moving into bringing U.S. at the table as well.”

Iran seems to be cautiously returning the gestures of goodwill. Iranian Foreign Minister Javad Zarif wrote on August 3 that the “B-team” is shrinking in response to “Iran’s regional dialogue.” Slim claimed that the “B-team” insult has not been “well-received” by bin Zayed in the past, so Zarif’s latest statement was a “toning down of inflammatory rhetoric.”

Even the UAE’s rivals have joined the action. Qatar, an ally of Turkey, sent its own coast guard to Tehran for talks on Monday. Parsi and Slim agreed that the small monarchy was trying to preserve its own seat at the table if there is a region-wide peace agreement.

“It's still in the testing phase. It hasn't moved to a phase where it can lead to an official regional dialogue on de-escalation,” Slim cautioned. But “we have stepped away from the abyss. We were very close.”

“There was a rush by many parties towards some kind of a military confrontation,” she concluded. “I think that rush to this confrontation has been halted for now.”