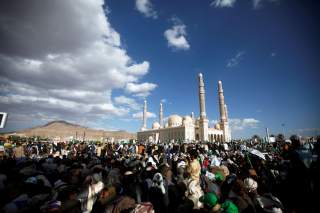 Iran, it is said, is the only country in the Middle East that rules four other capitals: Baghdad, Beirut, Damascus and Sana’a. Of course, its rule is through large, armed and influential Shia militias, not direct political control.

Sana’a is the capital of Yemen, on the Southwestern corner of the Arabian peninsula. One of the Arab world’s poorest states, Yemen is known for its bees, its vast deserts and its civil wars. Uprisings, raids and rebellions have riven Yemen since the 1960s, when its once-British and Ottoman halves became communist and Islamist halves that waged war by machine-guns mounted on the beds of roving Toyota pick-ups.

Today, Iran plays a major role in a three-sided civil war that pits the officially recognized government (backed by the United States, Saudi Arabia, the United Arab Emirates, Egypt and others) against al Qaeda and ISIS elements and the Houthi rebels (backed by Iran). Iran publicly supports the Houthis, a Shia Islamic tribe with roots that extend to Islam’s earliest days. For nearly a millennium, Shia imams ruled this land and many of them were drawn from Houthis. While the tribe remains a large plurality, its rule of Yemen ended when the British arrived in the 1700s. Its form of Twelver Shia Islam is similar to, but distinct from, Iran’s Twelver Shia Islam. Tehran has denied providing arms to the Houthis, but the U.S. Navy has intercepted at least two ships packed with weapons bound for the Houthis, according to many Arabs channels.

Yemen’s war has approached or set records in every type of human misery. More than 21 million of its people are internally displaced, according the United Nations—making it officially the biggest humanitarian crisis in the world. Food, water and medicine are scarce, with famine stalking 14 million, according to the Guardian newspaper. Some ten thousand new cholera cases are reported each week. An average of seventy-seven children under five-years-old have died every single day since 2015, according to Save The Children, a UK-based charity.

Each of Yemen’s five largest cities have suffered sieges in the past five years, some more than once. Every day, bullets and mortars compete with disease and hunger to kill the most Yemenis.

This week, the UN’s envoy to Yemen, Martin Griffiths, a British diplomat, is holding a peace conference in Stockholm. Earlier talks have failed when the Houthis refused to attend.

In a happy surprise, this time, the Houthis have agreed to participate.

This abrupt shift in the Houthi position follows a string of the defeats suffered by them along Yemen’s Red Sea coast and, most importantly, the Houthis’ loss of the port of Hodeidah, its main lifeline to Iran. For months, United Arab Emirates ground and special forces, along with Saudi warplanes, waged a Stalingrad-style battle for the port and its surrounding warehouses and city. This hard-won ground may now pay dividends at the peace table.

The allied victory at Hodeidah was far from total. Many Houthis militia forces managed to escape the mop-up.

Still, the victory apparently drove a wedge among the Houthis, who now also fear the loss of their stronghold at Saada, an interior city. This shift in the Houthis internal politics—from united to divided—seemingly led to the announcement that they will participate in peace talks for the first time. The announcement came more than a week ahead of a deadline set for participation. Of course, no one can say for sure what is inspiring the Houthis’ change of heart; there is no reporting from inside their leadership circles. Still, the facts on the ground and their change of behavior speak for themselves.

This brings us back to the key question in the conflict: What is Iran’s role on the Arabian Peninsula? It is doubtful that Saudi Arabia and the UAE, which are in proxy wars with Iran in Yemen and Syria and on the diplomatic front regarding the Islamic Republic’s nuclear-weapons program, would accept an armed, Iran-backed militia on their southern flank. It is equally unlikely that Iran will accept defeat at the peace table in Stockholm unless it is utterly vanquished on the battlefield in Yemen.

In the U.S. context, this may also explain why Iran’s ally, Turkey, is doing all it can to fan the flames of the Khashoggi investigation. Its constant leaks of its intelligence materials (phone intercepts, intelligence reports) to the Washington Post and other U.S. media outlets have helped shift American opinion about the Saudis. Congress is now considering a resolution to urge the president to withdraw military aid from Saudi Arabia and to end U.S. Navy support for the kingdom’s war in Yemen. (The U.S. refuels Saudi and UAE warplanes and offers other logistical support.) Intentionally or not, President Donald Trump’s rivals may be helping the Iranians win the war in Washington that they are losing in Yemen.

For Yemen’s suffering millions, a peace treaty in Stockholm would be a godsend. Even a temporary ceasefire would save thousands.

But the diplomatic momentum that Tehran is enjoying in Washington may dissuade it from urging its Houthi allies from settling their claims at the peace table.

It would be better if U.S. senators could see that their desire to send a symbolic message about a murdered Saudi activist is actually prolonging a humanitarian horror show in Yemen. That epiphany among lawmakers is unlikely too.

The United States is fortunate to have capable regional strategic partners in Israel, Saudi Arabia, UAE and the Sunni Arab states that share a common interest in countering Iran’s threatening ambitions.

It is an asset that must be preserved.