Iran Stirs Up More Trouble in the Gulf 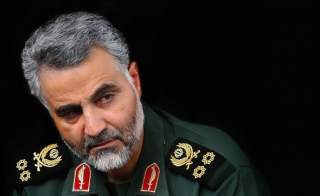 Qassem Soleimani, commander of Iran’s Islamic Revolutionary Guard Corps’ external operations wing the Quds Force, issued a scathing condemnation June 20 against Bahrain’s revocation of the citizenship of a top Shia cleric. Soleimani proclaimed Sheikh Isa Qassim to be Tehran’s “red line,” and warned that any harm coming to him would spark an “armed intifada,” and “a fire in Bahrain and across the region.”

Bahrain, a small island monarchy in the Persian Gulf, is a strategic nation to Washington, hosting the U.S. Navy’s Fifth Fleet—responsible for the Gulf and surrounding areas. It is also, however, strategic to Tehran. The population is 70 percent Shia, but ruled by the Sunni Al Khalifa clan. Bahrain has a decades-long history of discriminating against the Shia majority, and the ruling elite tends to treat Shiites’ demands for greater freedoms as evidence that they are Iranian fifth columns. Iranian officials and commanders have not helped that perception, as they often describe the country as the Islamic Republic’s rightful “fourteenth province.”

The Arab Spring reached the kingdom in early 2011, and the Gulf Cooperation Council—led by Saudi Arabia—promptly intervened to safeguard their fellow Sunni monarchy. Reconciliation talks since then between the government and opposition have broken down several times, and intermittent clashes have persisted.

The surge in alleged IRGC-linked plots in Bahrain and the Arabian Peninsula has alarmed the island nation’s authorities. Since 2011, Bahraini security forces have intercepted large quantities of advanced weapons shipments, including armor-piercing explosively formed penetrators, bound for radical revolutionary groups like the February 14 Youth Coalition and Saraya al-Mukhtar.

(Recommended: 5 Weapons Iran Would Love to Buy from Russia)

Bahraini authorities have made several such discoveries since last summer’s Iran nuclear accord, including a bomb factory and a cache of 1.5 tons of high-powered C4 explosives in October 2015. The episode led Bahrain to recall its ambassador from Tehran and expel the Iranian ambassador from its soil. Manama has announced that it arrested at least sixty Bahrainis linked to the IRGC and Hezbollah since July of last year, and, last week, charged eighteen and revoked the citizenship of five others belonging to Saraya al-Mukhtar. Similar plots and shipments have been interdicted in Saudi Arabia and Kuwait.

Iran has redoubled its arm shipments to Bahrain and the Arabian Peninsula in quantity and quality since the outbreak of civil war in Syria. This is no coincidence: Soleimani wants to open a front there to pressure the Saudis against supporting antigovernment rebels in Syria. The letter issued by Soleimani, who is in charge of the Syria portfolio, reflects this strategy.

Prior to revoking Qassim’s citizenship, Bahraini authorities had been reputedly investigating a bank account in his name holding nearly $10 million. In announcing the revocation, they said he has played a key role in creating an “extremist” sectarian atmosphere and dividing society. Bahraini officials have on a number of occasions revoked the citizenship of individuals prior to expelling them. The latest decision, however, comes amid a wider crackdown on all Shia opposition.

The main Shia opposition group, Al Wefaq, is an Islamist party that has historically preferred political struggle to the revolution advocated by Qassim. Last year its leader Sheikh Ali Salman was sentenced to four years in prison, and an appeals court in May increased the sentence to nine years. In mid-June, Bahraini authorities suspended all Wefaq party activities to “safeguard the security of the kingdom.”

Western governments for their part have looked the other way: U.S. officials have voiced criticism in press conference and statements, but bilateral relations appear to remain unchanged. Where the United States at least took rhetorical stands against Bahraini policies, it has been mute on Soleimani’s letter.

The possibility of such an escalation was echoed by Qassim’s representative in Iran, Sheikh Abdullah al-Daqaq, who held a press conference shortly after the sheikh’s arrest last month at the headquarters of the IRGC-affiliated Tasnim news agency in Tehran. He praised Soleimani’s statement as a “clear message for the Bahraini government,” and slammed Saudi Arabia for pushing Al Khalifa to “take revenge from the Shiites” for the liberation of Fallujah from Islamic State in Iraq. Should Bahraini authorities attack Qassim at his home, it could lead to a “bloodbath,” he added. The February 14 Youth Coalition, which was supposed to receive a shipment of advanced IRGC weapons in 2013, has threatened protests nationwide if security forces continue surrounding Qassim’s home.

The Shiite clergy in the scholarly centers of Qom, Iran and Najaf, Iraq have unanimously condemned Qassim’s citizenship revocation, though the clerics in the former—who have close ties to the Islamic Republic—have struck a more aggressive cord. The respected Grand Ayatollah Ali al-Sistani in Najaf, where Qassim spent many years, told him, “Your place is in our hearts, and what has happened will not bring you harm.” Qom-based Grand Ayatollah Nasser Makarem-Shirazi called the Bahraini government’s move “satanic,” warning its end is “close.” Grand Ayatollah Kazem al-Haeri, the marja (“source of emulation”) for many Iraqi Shia militants, compared the Al Khalifa to the ancient pharaohs, warning their decision on Qassim could lead to their overthrow.

Officials close to President Hassan Rouhani, on the other hand, have struck a less aggressive tone. Foreign Minister Mohammad Javad Zarif scrambled to reassure foreign audiences on June 22 that although there are “different voices” in Iran, Tehran “values relations with neighboring countries.” But the following day in the Netherlands, he denied differences with Soleimani, saying, “I talk with the commander and we both believe the Syrian crisis has a political solution.”

Rouhani has thus far been silent on Soleimani’s letter and the Bahrain issue generally, though he indirectly criticized Khamenei on June 21 in a separate talk. Addressing university professors, the president said that Iran cannot make scientific and technological progress if it shuts its door to the outside world. It is no secret that Rouhani seeks to improve Iran’s image, especially with Arab neighbors wary of Iran’s destabilizing role in the Syrian and Yemeni civil wars, and the cash influx it is starting to reap from the nuclear deal. The mob attacks on Saudi missions in Iran by IRGC-affiliated forces earlier this year have further isolated the country from its neighbors.

Soleimani’s blatant meddling in Bahrain demonstrates the degree to which he, the IRGC and the supreme leader feel emboldened to project power across the region. As the Islamic Republic is asserting itself on the world stage after a decade of isolation, it will be they—and other hardliners close to the supreme leader—who set the tone.

Saeed Ghasseminejad is an associate fellow at Foundation for Defense of Democracies, where Amir Toumaj is a research analyst. Follow them on Twitter @SGhasseminejad and @AmirToumaj.