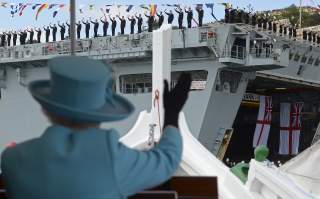 Great Britain once had a marvelous navy, its warships boasting names like Courageous, Dauntless, Indefatigable, and Ultimatum. Her fleets were more than a source of national pride—they manifested it, a physical assurance that Britain had the ability to see to its national interests.

In the early 1980s, not too long after Margaret Thatcher became prime minister, the Royal Navy sailed sixty-four surface combatants and sixteen submarines. Today, the British fleet has dwindled to a mere nineteen surface ships, half of which are in maintenance, and only ten submarines. This is the result of serial underinvestment in defense, a condition witnessed throughout most of Europe and even in the United States.

The consequence of this underinvestment is that Britain and other Western nations today are minimally able to protect their own interests, with almost no ability to deter bad behavior of the sort we have recently seen in the Gulf from the perennially thuggish Iran.

In reality, although it sounds harsh, Britain has only itself to blame for the seizure of its oil tankers. It has chosen to become a soft target—as has most of Europe—which encourages bad behavior by those willing to take what they want.

Iran’s recent attacks on oil tankers would be surprising were it not for its forty-year pattern of problematic behavior enabled, even incentivized, by the West’s tolerance, apathy, occasional complicity, and self-imposed weakness to do anything about it. Ever since the mullahs seized power in 1979, the odious regime in Tehran has consistently employed violence and the threat of violence to maintain power at home and extend its influence across the Middle East.

Sometimes it acts directly, but more often it leverages surrogates like the terrorist organizations Hezbollah, Hamas, Islamic Jihad, and even the Sunni Al Qaeda, among others. It has steadfastly worked toward the destruction of Israel, secretly developed a nuclear weapons program in direct violation of the Nonproliferation Treaty it signed in 1970, redoubled its efforts to develop ever-more capable ballistic missiles, and trained and supplied militias in Iraq and elsewhere to attack U.S. forces and other perceived enemies of Iran.

Hezbollah has tens of thousands of Iranian-supplied rockets and missiles, a stockpile it uses to rain on Israel. Iran has directly supported Houthi rebels in their effort to gain control of Yemen and enabled them to attack Saudi oil infrastructure and civilians. It has helped to secure the equally repugnant Assad regime in Syria.

It was Iran’s violation of EU sanctions on the sale of oil to the Syrian regime that led Great Britain to intercept a tanker sailing near Gibraltar. Continuing its long-practiced thuggishness, Iran’s response was to seize a British tanker in international waters.

The United States, though itself no longer reliant on Middle East oil, recognizes that much of the world remains dependent on the uninterrupted flow of energy from this troubled region. This does not stem from entirely altruistic motives, but also from the knowledge that energy security enables stronger economies, and strong economies generate robust markets that the U.S. loves to engage.

There is also the matter of regional political and security stability that combine to minimize threats to others, reduce the export of terrorism and other forms of violence, and lessen the flow of migrants seeking to escape persecution or even death. Iran actively works to upend all of these positive conditions and has proven fiercely resistant to both diplomatic calls to mend its ways and economic incentives to become a rational participant in international affairs.

Following the recent spate of attacks against international shipping, the United States increased its military presence in the region to signal to Iran that its aggression and provocations would not be tolerated. Iran’s response? To shoot-down an unmanned surveillance aircraft flying in international airspace, to threaten seizure of one British tanker–narrowly thwarted by the lone British frigate operating in the region, and to forcibly board two other British tankers, releasing one but hijacking and detaining the other.

Britain has scrambled to redirect a second warship to the region and has accelerated the deployment of a third. Yet it will be hard-pressed to maintain an increased level of naval activity, given the military state of affairs back home. When asked about all of this, U.S. Secretary of State Mike Pompeo observed that, “The responsibility…falls to the United Kingdom to take care of their ships,” then continued with, “the United States has a responsibility to do our part, but the world’s got a big role in this too—to keep these sea lanes open.”

Pompeo’s statement of the obvious likely hit a nerve within Britain’s establishment, as it is now readily apparent to all that the one-time “Ruler of the Waves” today has limited ability to do much of anything. Unfortunately, most of the West is in the same (ahem) boat.

Our European partners are now showing some interest in pooling resources to conduct patrols in the strategic waters of the Gulf region. But they are still trying to pressure the Trump administration into easing up on targeted sanctions against the regime and help Iran find ways to circumvent those sanctions. In doing so, France, Germany, and the United Kingdom are only further incentivizing Iranian aggression.

Before Donald Trump took office, the accepted ways of doing things, prized by the foreign-policy elites of all Western capitals, had given us: an expansionist China who had built and militarized islands in the South China Sea; a resurgent and militaristic Russia meddling in European affairs, seizing parts of countries, and propping up murderous regimes; a nuclear-armed North Korea; and a rogue Iran that had been rewarded with $100 billion for agreeing to put its nuclear plans on hold temporarily, without having to scale back its support to terror groups, stop its proliferation of missile technologies, or recant its pledge to destroy Israel.

It would have been surprising had President Trump continued sailing the course preferred by those who helped previous administrations chart it. Clearly, the president has taken a very different approach to each of these regimes in the hope of producing different (i.e., positive) outcomes. That Iran is throwing a tantrum at finally being taken to task for its egregious behavior should surprise no one.

Dakota L. Wood is a senior research fellow in The Heritage Foundation’s Center for National Defense.