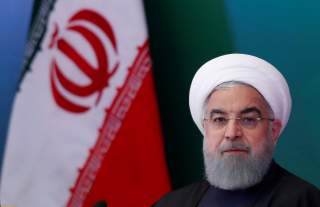 President Donald Trump will chair a special session of the UN Security Council to address “Iran’s destabilizing aggression and sponsorship of terrorism” on September 26. During that time he will also discuss “the proliferation of weapons of mass destruction, including chemical, biological, and nuclear weapons and ballistic missiles.” The decision of the United States to focus on Iran underscores its strategy of assertiveness toward the Islamic Republic.

Since withdrawing from the Obama-era nuclear agreement, known as JCPOA, the Trump administration has imposed a series of tough sanctions designed to deny Iran’s leaders the resources they use to fund proxies in Iraq, Syria, Yemen and Lebanon. In August, sanctions took effect that prohibit the purchase of dollars by the Government of Iran; trade with Iran in gold or precious metals; the sale, supply, or transfer to or from Iran of graphite, aluminum, steel and coal; the purchase or sale of Iranian rials; and the purchase, subscription to, or facilitation of the issuance of Iranian sovereign debt.

This November another set of sanctions will enter into force that prohibits transactions with Iran’s ports and shipping companies; the purchase of petroleum and petrochemical products from Iran; transactions between foreign financial institutions and the Central Bank of Iran and other Iranian financial institutions; and the provision of underwriting services, insurance, or reinsurance.

While necessary, these U.S. measures alone will not change Iranian behavior. No sanctions regime is impermeable. The Iranian regime is adept at sanctions-busting economic workarounds. Iran is aided by the absence of an international consensus to isolate it. The EU is examining ways to blunt the impact of sanctions to preserve the nuclear deal. Russia, China and Turkey have vowed to continue trading with Iran to challenge American power. Press reports suggest that former Secretary of State John Kerry has been advising the Europeans on strategies on evading U.S. sanctions.

If real change is going to come in Iran, then it will come from within Iran. Secretary of State Mike Pompeo acknowledged on July 22, “While it is ultimately up to the Iranian people to determine the direction of their country, the United States, in the spirit of our own freedoms, will support the long-ignored voice of the Iranian people.”

President Trump should use the Security Council meeting to focus on efforts of the Iranian people to free themselves of the regime that neither represents nor respects them. The same member states of the UN that are defending compromise with Iran should listen to the leader of the free world speak on behalf of the long-suffering population of Iran, which is being systematically jailed, executed and silenced. The 2018 Iran Summit Uprising planned in advance of that meeting will echo this message.

Since December 2017, Iranians from all regions, social classes, and ages have engaged in protests targeting the regime’s policies and legitimacy. While demonstrations in Iran are nothing new, the recent wave of dissent reflects an unprecedented level of boldness and organization among pro-democracy activists. Chants of “Death to the dictator;” “We don’t want to be ruled by clerics;” and “Islamic Republic, no more” attest to the people’s rejection of the Islamic revolution and their desire to change the government. The inability of authorities to suppress these demonstrations suggests that the people may at last be in a position to realize their goal.

The September 26 Security Council meeting should encourage the international community to help them—for the sake of supporting principles of democracy and the security interests of the US demand it.

This summer, European authorities prevented an Iranian-orchestrated terrorist attack against the gathering of an Iranian opposition group, the Mujahedin-e Khalq (MEK), in Paris. The attack would have involved the detonation of five hundred grams of TATP explosive, which an Iranian diplomat, Assadollah Assadi, had provided to an Iranian couple later arrested. Had the attack been successful, it would have resulted in the deaths of scores of the one hundred thousand participants, who also included prominent American political figures.

Iranian officials, including Supreme Leader Ali Khamenei, insist that the National Council of Resistance of Iran (NCRI) and its leader, Maryam Rajavi, are driving the protests inside Iran. The foiled attack in Paris was not an isolated incident: in 2013, a U.S. federal court convicted an agent with ties to the Iranian Revolutionary Guard Corps for conspiring to assassinate Saudi Arabia’s ambassador to the United States. In March, Albanian police arrested two Iranians who were planning to attack MEK refugees in that country. It is a sign of desperation that Iran’s leadership is prepared to use diplomatic personnel and posts to carry out terrorist operations on foreign soil.

The Iranian regime’s terrorism abroad and political repression at home go hand-in-hand. If the international community is to seriously address one, then it must also address the other. Support for the brave people of Iran is the surest way to protect America and its allies.

Ambassador Ereli served as U.S. Ambassador to the Kingdom of Bahrain from 2007–11 and deputy spokesman of the State Department from 2003–06.