Iran's Battle Over Khamenei's Successor is Just Getting Started 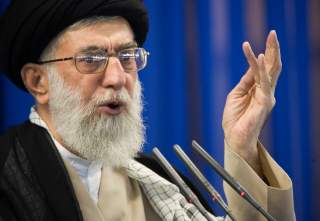 As Iran prepares to mark the fortieth anniversary of the Islamic Revolution, the question of who will succeed the ill and aging supreme leader Ayatollah Ali Khamenei is resurfacing. No matter who that cleric might be, Iran is likely to be ruled by another religious figure who is far less powerful than Khamenei and more beholden to the Islamic Revolutionary Guard Corps (IRGC).

Mahmoud Hashemi Shahroudi, who died in late December, had been considered the leading contender to replace Khamenei. Shahroudi was a Khamenei loyalist who rose to the highest ranks of the Islamic Republic’s political clerical elite under the supreme leader’s patronage and was considered his most likely successor. A former judiciary chief, Shahroudi was, like his patron, a staunch defender of the Islamic Revolution and its founding principle, velayat-e-faqih (rule of the jurisprudent).

Shahroudi had a sound command of classical Arabic and was well versed in Arab Islamic ideology, often reading the ideas of prominent Islamists such as Sayyid Qutb. Khamenei also looked to Shahroudi as a possible successor to Ayatollah Ali al-Sistani in Iraq—even though the Iraqi clerical establishment vehemently rejects the idea that a cleric who believes fully in velayat-e-faqih could succeed Sistani, who has a wide following among Shia across the Arab world. If Shahroudi had held either of these posts, Khamenei would be assured that his revolutionary ideals would live on.

With Shahroudi’s passing, there does not appear to be a shoo-in successor Khamenei favors, but there are a few possibilities. One is Sadeq Larijani, the head of the judiciary, who is also Iraqi born. Another possibility is Ebrahim Raisi, a former presidential candidate and the custodian of the holiest shrine in Iran, Imam Reza. Raisi is a student and loyalist of Khamenei, whereas Larijani, also a hard-liner, is more independent.

Khamenei will likely designate a successor who will continue to defend Iran’s revolutionary ideology, which is anti-Western and particularly anti-American. Adherence to the concept of supreme clerical rule is also required. Both Larijani and Raisi are in their fifties—important to Khamenei because the next supreme leader must be young enough to survive the current opposition to clerical rule prevalent among many of Iran’s youth. A majority of Iranians are under the age of twenty-nine.

Any successor would also have to be vigilant about containing unrest at home while protecting the country from threats abroad. In the eyes of many, including the IRGC, Iran is always at risk of being compromised by the “enemy.” There are often media reports that the IRGC might rule Iran after Khamenei dies. But this scenario is highly implausible. It would violate the Iranian constitution, and it is not in the interests of the Guard to rule the state, but rather to simply have a supreme leader in place who supports the Guard’s ideology and its military initiatives and protects its commanders’ vast investments and commercial holdings. The U.S. government estimates that the IRGC controls 20 percent of the Iranian economy.

Discussions of succession open the door for other possible scenarios of how the Islamic Republic should be ruled. Khamenei, at seventy-nine years old, is nearing the end of his life. Over the years he has ensured that no other faction within the state, whether led by hard-liners or moderates, could acquire enough power to challenge his own. His long-held strategy has been to pit different political factions against each other to keep them weak.

Because he had thirty years to transform the position of supreme leader into one with ultimate authority over state affairs—overriding the authority of the president and foreign minister and even military commanders—the succession is likely to create a political crisis. No matter who replaces Khamenei, there is no cleric who will have such broad powers over state affairs.

Among the less likely scenarios for succession is one arising from a school of thought advanced by more moderate clerics within Iran’s Qom seminaries. These clerics have long thought that Khamenei should be the last supreme leader. Mohsen Kadivar, an unconventional cleric who fled Iran in the 1990s and now teaches at Duke University, is a preeminent scholar of supreme clerical rule who has written that since the death of Ayatollah Ruhollah Khomeini, there is a “long-standing and secretive belief” among a majority of Iran’s religious teachers and scholars that supreme clerical rule only leads to despotism and must be abolished. These religious teachers and scholars believe that Iran’s political leaders should be chosen by popular election, rather than by appointment.

So what are the other options?

One possibility is a leadership council, perhaps comprised of laymen and clerics, that would rule the state. But this raises the question of how such a council would keep the powerful IRGC in check. This idea was advanced periodically by the late Iranian leader Hashemi Rafsanjani, but it never received much traction among hard-liners within the highest political ranks.

Events in the Middle East have allowed the Guard Corps to make significant inroads in the region: they have expanded their influence in Lebanon, made attempts to overthrow the government of Bahrain by running training camps for Shia opposition groups, and spearheaded the fight in Syria to ensure President Bashar al-Assad’s survival. At home, the Guards have become the custodians of maintaining order and fighting back against anything that could threaten the regime.

For example, in 1999, when I was in Iran as a correspondent, the IRGC wanted to unseat then president Mohammad Khatami because they did not believe he had effectively dealt with student protestors who had taken to the streets in Tehran over a lack of press freedom. At the time, a tape was circulated of an alleged IRGC plot to overthrow Khatami. The plot was never carried out; the reason for this is unknown. It is unclear if Khamenei was in favor of such a plot, but presumably he too feared the protestors would go on to lead a national movement of civil disobedience that would ultimately threaten his position.

The more moderate political camp will also want a say in what happens after Khamenei. President Hassan Rouhani, also a revolutionary but considered by some to be more moderate than the hard-liners, has a contentious relationship with the IRGC, and his choice of contenders will likely be pitted against those supported by the hard-liners within the regime. It is unlikely, however, that any contender without the backing of the Guard Corps will be appointed.

Khamenei’s death will be perhaps the most decisive factor in Iran’s future since Khomeini’s death in 1989. His passing will also be felt within the clerical ranks of Najaf, Iraq, the holy Shiite city where he financially supports some clerics who believe in absolute clerical rule. However, no matter who replaces him, it is likely that Iran’s political and religious system will remain unchanged for the foreseeable future.