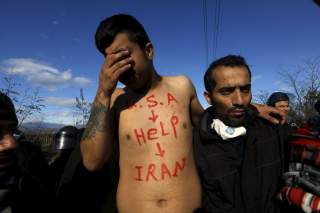 Publicly, the Islamic Republic of Iran blames the United States—and the other usual foreign-enemy suspects—for the nationwide protests that gripped the country of some eighty million people for at least a week.

The demonstrations clearly arose as the direct result of the regime’s repressive and misguided policies, not because of some foreign power’s interference or meddling.

The regime knows this—and so do the Iranian people.

The Iranians who hit the street have good grounds to be deeply displeased with the regime. It has imposed its ruinous political, economic and social policies on its people without their consent for nearly four decades now.

Just page through the Iran section of the U.S. State Department’s 2016 annual human-rights report to Congress. It writes that the Iranian regime is responsible for “severe restrictions on civil liberties, including assembly, association, speech, religion and press.”

We also know that Iran is no democracy: Iranians don’t get to choose their government through free and fair elections. The regime decides who can run for political office—and you can bet every approved candidate is a loyalist.

The economy isn’t any better for the Iranian in the street either. The mullahs have mismanaged the energy-rich country horribly, reducing it from one of the most advanced economies in Middle East at the time of the 1979 Revolution to one rife with hardship today.

Indeed, it is believed that the among the matches that lit the fuse to these powder keg uprisings were the increasing costs of basic food stuffs (e.g., eggs), government corruption and high levels of unemployment, especially among the youth.

The dismal state of the economy is even more inexplicable considering the transfers of previously frozen funds and the lifting of punitive international economic sanctions on Iran under the 2016 nuclear deal.

While the free flow of information is restricted within Iran, to the extent that they are aware, the Iranians probably aren’t that enthused about how their blood and treasure are being spent abroad in protracted conflicts in Syria and Yemen. Iran is also involved in the turmoil in Iraq, Lebanon and Afghanistan.

Indeed, there are reports of protesters chanting “Not Gaza, not Lebanon—we will give our lives to Iran” and “Leave Syria, think of us.”

Clearly there is some level of dissatisfaction with the regime’s heavy spending to support the terrorist groups Hezbollah in Lebanon and Hamas in the Gaza Strip. Iran almost certainly supports Hezbollah in its terror operations outside the Middle East as well.

What about the money that the regime has been spending on its currently limited—but still ongoing—nuclear (weapon) and ballistic-missile programs? Those extraordinary military expenses, which may violate U.N. Security Council Resolutions, can’t sit well with Iranians in need, either.

Iran is failing at every level despite the terrible deal made with them by the Obama administration. The great Iranian people have been repressed for many years. They are hungry for food & for freedom. Along with human rights, the wealth of Iran is being looted. TIME FOR CHANGE!

That’s pretty much calling it like it is: After nearly forty years, the Islamic regime has—and is—failing the Iranian people.

The big question, of course, is: what should the United States do about it? One option is to do nothing, stand aside, remain silent and let the Iranians sort things out—essentially, the approach taken by the Obama administration during the 2009 protests.

Of course, doing nothing is—in actuality—doing something, and it shouldn’t be the course we take this time. The Iranian regime not only poses a great threat to universal human values, but it is also a threat to U.S. security and to that of U.S. allies, friends and partners.

Instead, we should be speaking out loudly on human rights in Iran—whether the protests continue or not. We should encourage other nations to voice their support for the Iranian people’s aspirations, too, especially from the major, democratic capitals of Europe.

We shouldn’t expect the Iranian regime to relinquish its white-knuckle grip on power, but it’s important that the Iranian people—and the world—understand that we back their desire for political, social and economic rights and liberties.

It’s just the right thing to do.