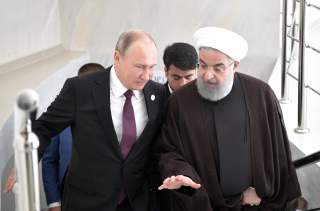 From the “smiling cleric,” to the “diplomat sheikh,” Iran has been home to its fair share of mullahs masquerading as moderate ministers. These same characters have used slogans like “dialogue among civilizations” and “prudence and hope” as diplomatic smoke signals to convey that Tehran is ready to shred its revolutionary dogma and assume a more conventional Westphalian existence. But, as the United Nations General Assembly convenes for the first time since the U.S. withdrawal from the Joint Comprehensive Plan of Action (JCPOA), the playbook of Iran’s deep state—the supreme leader and the security services—will be on full display: the weaponization of moderation through deception and diplomatic doubles.

Vienna, Geneva, New York, Muscat, and other capitals have welcomed aspiring Iranian statesmen of all shapes and sizes—hardliners, so-called moderates, and technocrats alike. The Islamic Republic’s longest serving foreign minister, Ali Akbar Velayati, was a U.S.-educated pediatrician. Then came his more reform-minded successors, Kamal Kharrazi and Javad Zarif, who received doctoral degrees at the Universities of Houston and Denver, respectively. Hassan Rouhani, when he served as the chief nuclear negotiator during the Khatami administration, had completed his graduate-level work at Glasgow Caledonian University. And let’s not forget Ali Akbar Salehi, a nuclear technocrat, who served at the highest levels during the Ahmadinejad and Rouhani years. He was educated at MIT. Former President Mahmoud Ahmadinejad, Foreign Minister Manouchehr Mottaki, and nuclear-file pointmen Saed Jalili and Ali Larijani, did not have similar pedigrees, and achieved little headway. Thus, the Iranian strategy has been perfected over time: the use of figures with the patina of Western education as front men for a brutal regime to exact concessions from the international community.

Supreme Leader Ayatollah Ali Khamenei has deftly exploited carefully-curated reform-minded public personas of presidents and policymakers to deceive the international community. During the administration of Mohammad Khatami—who some dubbed the “Iranian Gorbachev”—Iranian defectors produced documents that indicate Ali Akbar Nategh Nouri, on behalf of the supreme leader, greenlighted contacts between Tehran and Al Qaeda in the months before September 11 all while Khatami promoted a “dialogue among civilizations.” In his 2011 memoirs, Hassan Rouhani all but admitted that the ayatollah used this gambit while he was the chief nuclear negotiator with the EU3: “[w]hile we were talking to the Europeans in Tehran, we were installing equipment in Isfahan. By creating a calm environment, we were able to complete work at Isfahan.”

Fast forward to 2018 and by creating the illusion of a calm environment—by inking the JCPOA during the Rouhani presidency—the Iranian regime was able to buy time and space to project power abroad. Consider a report just released by a United Nations panel of experts that wrote, “Al-Qaida leaders in the Islamic Republic of Iran have grown more prominent, working with A[y]man al-Zawahiri and projecting his authority more effectively than he could previously.” Or another United Nations report which indicated the Houthis in Yemen continued to have ballistic missiles and drones that “show characteristics similar to” Iranian weaponry in violation of an international arms embargo. This is the modus operandi of Iran’s deep state—engaging while raging with the world.

In addition to deception, the Islamic Republic routinely engages in diplomatic doubles—multiple, overlapping foreign-policy personas spanning different government organs. It starts with the dual objectives embedded in Article 154 of Iran’s constitution: abstaining “from any kind of intervention in the internal affairs of other nations” while supporting “the struggles of oppressed for their rights against the oppressors anywhere in the world.” Such a multifaceted mission invites both a conventional public foreign-policy apparatus: the foreign ministry led by Javad Zarif and an unconventional shadow architecture comprised of the office of the supreme leader and the Islamic Revolutionary Guard Corps (IRGC). Indeed, Zarif all but acknowledged this dynamic earlier this month—namely that he is a mere spoke in the Iranian wheel of state.

It’s in this structural context, that the foreign minister—and Rouhani himself—will be wined and dined in New York. A major speech at the podium of the United Nations; an appearance at the Council on Foreign Relations, the Asia Society, or another think tank; off-the-record sessions with diplomats and practitioners—past and present; a major press conference; and interviews with popular American journalists are the usual routine. Rouhani and Zarif will argue on the pages of the New York Times or Washington Post that Iran is open to win-win constructive engagement with the international community; that Iran has been operating with good faith and is the victim of Trump tantrums; and finally a misleading reminder that Tehran has never started a war. At the same time, Rouhani and Zarif will be careful to walk a delicate balance to appease hardliners at home with throwaway threats that Iran is able to close the Strait of Hormuz and refusals to meet with members of the Trump administration. Indeed, Ayatollah Ahmad Jannati, a hardliner’s hardliner who wields unique authority within the Islamic Republic as the head of the Guardian Council and the Assembly of Experts, has already warned Rouhani against meeting with Trump.

Yet Iran maintains a parallel network of emissaries whose authority derives from the supreme leader and not Rouhani. Ali Khamenei, Qassem Soleimani and Ali Akbar Velayati embody this nexus. These figures will not be a part of the Iranian delegation to the opening of the General Assembly because discussions over manpower, money, and materiel happen in the region and not at the United Nations. Furthermore, a sitting supreme leader has never visited New York; Soleimani is the subject of a travel ban; while the Velayati has only undertaken special diplomatic assignments for the supreme leader.

This hydra-headed system was on full display regarding Russia and Syria. Velayati manages the strategic portfolio, recently holding meetings directly with President Vladimir Putin in order to convey messages from the supreme leader. Zarif’s role appears more junior, confined to liaising with his counterpart Russian foreign minister Sergei Lavrov, laying the groundwork for higher-ranking principal-level meetings—most recently in Tehran with Presidents Hassan Rouhani, Recep Tayyip Erdogan and Vladimir Putin—and jetting around the world to carry the Iranian flag at important international gatherings with a cameo appearance at times by Rouhani.

Deception and diplomatic doubles are Tehran’s foreign-policy tradecraft. Tune in on September 25 for the show.

Jason M. Brodsky is the policy director of United Against Nuclear Iran (UANI).