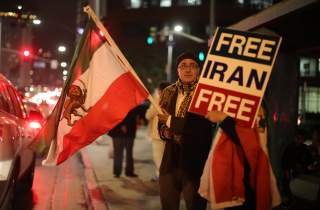 Participants in the countrywide protests in Iran are urging a retreat from costly foreign fights and more aid at home. Even if regime change does not take place, Tehran’s clerical rulers may have to pull in their horns. But if they slash Iran’s military footprint in Syria, then Bashar al-Assad’s grip on power may again become tenuous. The West could exploit these tensions by pressuring Moscow and Damascus to stop sabotaging UN negotiations on a Syrian political settlement.

The protests that erupted throughout Iran just a few days before the end of 2017 have resulted in over twenty dead and two thousand Iranians arrested. While Grand Ayatollah Khamenei blames “enemies of Iran,” dissatisfaction appears to be widespread among his people. Likewise, Iran’s ally Russia has warned the West not to meddle.

Ordinary Iranians ought to be living better, but are not. Oil output has climbed back to levels before 2011, when the West, Russia and China imposed sanctions to spur Iran to limit nuclear proliferation risks. Those sanctions were lifted after a 2015 accord, but living standards have lagged. Protests broke out in response to an end to some consumer subsidies as well as anger over corruption and social policies.

Ordinary Iranians, to say nothing of minority Kurds or Arabs, are struggling with higher prices for food and fuel. Even Iranian war veterans are speaking out; one eloquent veteran says he belongs to “the forgotten.” Meanwhile, Iran’s sclerotic leadership lavishes spending on the powerful Iran Revolutionary Guards Corps and other elites while largely ignoring the demands of most people. Similar factors led to the Arab Spring uprisings throughout the Middle East and North Africa in 2011.

The European Union has called on Iran’s leaders to refrain from the use of violence against the protesters. President Trump and UN Ambassador Nikki Haley have gone further, praising the protesters and calling for a special session of the UN Security Council. Having kept mostly quiet during 2009 anti-government protests in Iran, this time U.S. leaders appear likely to be more supportive.

Iran has spent billions of dollars in its quest to be a regional hegemon. Its main achievement has been to spark instability across a wide swath of the Middle East. Iran has a thousand or more troops in Syria and sponsors foreign militia there. It backs a destructive war in Yemen, and aids Hezbollah and Hamas terrorists and insurgents. The protests suggest that expensive military adventures are unpopular with many Iranians. In the city of Mashhad, long a regime stronghold, protesters shout “leave Syria alone, think about us.” The United States might seek to use these missteps as leverage to pressure Iran.

Iran has paid a heavy price for its military intervention in Syria’s civil war. More than one thousand Iranians have been reported killed in the fighting, including some forty generals from the elite Iranian Revolutionary Guards Corps. In its struggle with Saudi Arabia for regional hegemony, Iran has spent billions of dollars building an extensive network of Shia fighters from Lebanon, Iraq, Afghanistan and Pakistan.

Instability in Iran is throwing a scare into Syria and Russia. Tehran and Moscow claim victory by pointing to the defeat of the Islamic State’s territorial control in Syria and the survival of their client, embattled President Bashar al-Assad. Yet the country is devastated, and Iran and Russia do not have the resources to help rebuild it.

Though nowhere near on the same scale as Iran, Russia, too, has paid a heavy price for its involvement in Syria. Despite Putin’s recent claims of victory in Syria, like the ayatollahs in Iran, the Kremlin also still has little to show for its prolonged involvement in the Syrian quagmire.

Moscow also worries that protests against the out-of-touch, authoritarian regime in Iran might encourage unrest in Russia around the March presidential election. If they occur, then the demonstrations could put at risk President Putin’s aim of a quiet election with a strong turnout and a high-winning margin.

At a summit in Sochi last November with leaders from Iran and Turkey, Putin called for a political solution to end the six-year Syrian civil war, and rightly said it would require compromise by all sides, including Assad’s government. Putin has been reluctant, however, to pressure Assad, who has been adamant in opposing concessions.

Through the resources of the wider international community, via established UN-led negotiations, negotiating progress could be possible. It will require stronger pressure on Syria, especially from Russia, and the carrot of substantial aid to help with Syrian reconstruction.

Colin P. Clarke is a political scientist at the nonprofit, nonpartisan RAND Corporation and an associate fellow at ICCT-The Hague. William Courtney is an adjunct senior fellow at RAND and was U.S. ambassador to Kazakhstan, Georgia and a U.S.-Soviet nuclear testing commission.