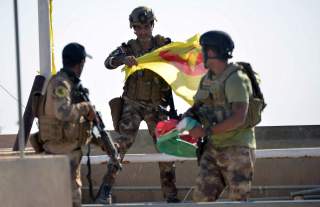 On Sunday October 15, the Pentagon encouraged Iraqi Security Forces and Kurdistan Regional Government (KRG) Peshmerga to “avoid escalatory actions,” as Iraq gave the Kurds an ultimatum to withdraw from areas around the city of Kirkuk. The United States said it opposed “violence from any party,” and that any action could risk destabilizing Iraq and distracting from the war on Islamic State.

The Pentagon statement has been overtaken by events. At two o’clock in the morning on October 16, the Prime Minister of Iraq ordered forces to “secure bases and federal installations in Kirkuk province.” Columns of black-painted Humvees from the elite counterterrorism Iraqi Special Operations Forces (ISOF), and others from the Federal Police and Iraqi army, moved towards the Kurdistan frontlines at Taza and Tuz Khurmatu south of Kirkuk. In addition, elements of several Shia militias, called the Hashd al-Shaabi, or Popular Mobilization units (PMU), sought to attack Kurdish positions. According to an article at the Institute for the Study of War, these included the Iranian-backed Badr Organization’s Turkmen brigade and units of the Asai’b Ahl al-Haq. They advanced toward a military base called K1, an airstrip and oil field near Kirkuk. Kurdish Peshmerga withdrew from many positions in the face of superior Iraqi firepower.

The conflict over Kirkuk goes back decades and involves bitter memories for Kurds of Saddam Hussein’s ethnic cleansing in the 1980s. It was a key sticking point in 1992 when Kurdish forces under Jalal Talabani occupied the city. After 2003, and especially under the 2005 Iraqi constitution, the status of the disputed city was supposed to be determined. It never was. Instead, the United States withdrew from Iraq and the situation in Kirkuk seethed. In 2014 Islamic State launched an offensive throughout northern Iraq, conquering Mosul and other cities in June. In August, it struck at Kirkuk. While Iraqi army units fled, abandoning an estimated 2,000 vehicles in northern Iraq to ISIS, the Kurds, with help from the U.S.-led coalition, eventually stopped the tide near Kirkuk. Iraq also rallied with the aid of tens of thousands of Shia volunteers for the PMU, who led the way to reconquer areas alongside newly minted and U.S.-trained units such as ISOF.

The current conflict unfolding around Kirkuk has its origins both in 2014 and in deeper conflicts with Baghdad. On September 25 the KRG held a referendum for independence which 92 percent of voters supported. Baghdad threatened to close the borders of the Kurdistan autonomous region in response, and closed the airports in Erbil and Sulaymaniyah. Baghdad wants a powerplay in Kirkuk to both punish the Kurds and control the local oil. But the actors involved show that the project is deeper than just Iraqi Prime Minister Haider al-Abadi’s strategy.

Baghdad, with U.S. advisors for its forces from the coalition and its numerous political parties, has not been the only driver of pressure on Kirkuk. Rather, the Shia militia leaders have. The day before Iraq announced its October 16th offensive, both senior leaders of the PMU, Hadi al-Amiri and Abu Mahdi al-Muhandis, went to Kirkuk to negotiate with local Kurdish leaders from the Patriotic Union of Kurdistan (PUK). Local journalist Fazel Hawramy tweeted photographs of them in Kirkuk. Amiri fought with the Iranians against Saddam in the 1980s and his Badr Brigade became a political organization after 2003. A member of Badr runs the Iraqi Interior Ministry, which oversees the Federal Police. Al-Muhandis is active in the Kataib Hezbollah militia and had to flee Iraq when the United States put him on a terrorist list.

Together, al-Amiri and al-Muhandis are close to the commander of the Quds Force from the Iranian Islamic Revolutionary Guard Corps (IRGC), which carries out the external operations of the IRGC. This commander, Qassem Soleimmani, arrived in Kurdistan on October 15th, according to Reuters. Soleimani, who paid two visits to the Kurdistan region in recent weeks, first to attend the funeral for former Iraq President and PUK leader Jalal Talabani, and then to discuss Kirkuk, has played a prominent role in recent affairs. This brings into stark clarity the Iranian influence over the Kirkuk operation.

The Iranian involvement is in stark contrast to U.S. policy, which has recently shifted to challenge Iranian influence in the region. In remarks at the University of Texas annual National Security Forum on October 12, Central Intelligence Agency Director Mike Pompeo laid out a robust position against Tehran’s policy. “Iran is a powerful nation-state that remains the world’s largest state-sponsor of terrorism,” he said. “When you look at the death and destruction inflicted in Syria, Yemen and Iraq by Tehran and its proxies the threat is clear, Iran is mounting a ruthless drive to be the hegemonic power in the region.” President Donald Trump denounced Tehran in his October 13 speech, where he referenced Iranian support for attacks on Americans in Iraq. The U.S. Treasury Department has also sanctioned the IRGC, noting that it was involved in using airports and bases in Iraq to transfer equipment to Syria. The picture Washington has painted is one of deep Iranian involvement in Iraq that is troubling for U.S. policy as the war against ISIS winds down.

The Kurdistan government has sought to raise the issue of U.S. equipment being used by the Shia militias in the battle for Kirkuk province. The Kurdistan Regional Security Council has put online footage it says shows “Iranian-backed PMU deployed near Maktab Khalid, southwest of Kirkuk, using U.S. equipment for attack on Kirkuk.”

For U.S. policymakers, the Kirkuk clashes are a test of their new Iran policy but also a headache. On October 13, Secretary of Defense James Mattis told reporters that “we have got to work on this. The Secretary of State [Rex Tillerson] has the lead, but my forces are integrated among these forces [Kurdish Peshmerga and Iraqi Army].” He said that the United States was working to “keep any potential conflict off the table.” However, conflict has erupted. Tillerson was disappointed that his attempts to get the Kurdistan Region to call off the referendum were not successful.

The developments in Kirkuk presents several important questions. Did Baghdad mislead the United States about its build-up near Kirkuk? On October 12, Maj. Gen Pat White, the commanding General of the Combined Joint Forces Land Component Command tweeted that he had “zero proof that any senior Iraqi government has sent threatening messages to the Kurds.” The U.S. coalition seemed to indicate that the presence of Iraqi units that had been advised by the United States during the Hawija operation was a natural outcome of that operation.

The United States has often stressed that the Kurdish vote might distract from the war against ISIS. Yet the current deployment of Iraq’s best units—including those that fought in Mosul, Tal Afar and Hawija—against the Kurdish Peshmerga in Kirkuk is not only a distraction from the fight against ISIS, but is also outside the mission U.S.-led coalition training was intended for. U.S. officials, such as Special Presidential Envoy for the Global Coalition to Defeat ISIS Brett McGurk, have been silent on the Kirkuk crisis.

Divisions in the Kurdish political camp between the Kurdistan Democratic Party and PUK have also complicated the situation in Kirkuk. The governor of Kirkuk, Najmaldin Karim, is from the PUK, as is the Vice-President Kosrat Rasul. Both have opposed the Iraqi operation. However, other PUK figures such as Bafel Talabani have sought dialogue with Baghdad. On October 16, some Peshmerga forces abandoned their positions south of Kirkuk because of the confusing internal political situation, according to local channel Rudaw. The divisions among the Kurds have enabled the Iranian-backed PMU and Soleimani to seek a separate agreement with different factions. The same divisions affect Baghdad as well. The ISOF and elite units were not trained to fight other peaceful Iraqis. The Iraqi Prime Minister stressed that the ISF were supposed to “cooperate with Peshmerga and avoid confrontations,” in a tweet sent out  early in the morning on October 16. This means that the Ninth Armored and other Iraqi units may be confused as to the operation’s goals and rules of engagement.

The clashes around Kirkuk illustrate that Iraq is entering a new phase with the decline of ISIS. For Baghdad, the priority is re-asserting control over the autonomous Kurdish region. For U.S. policymakers, the growing Iranian influence in Iraq, which could have been ignored during the war against the common enemy of ISIS, is now a concern.