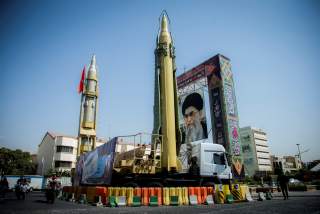 Last week, the head of Iran’s Islamic Revolutionary Guard Corps declared that the country’s Supreme Leader had mandated "cap" on the range of Iran’s surface-to-surface ballistic missile force of 2,000 kilometers. According to U.S. Director of National Intelligence (DNI) Dan Coats, the regime can already “strike targets up to 2,000 kilometers from Iran’s borders,” a range sufficient to hit both U.S. military bases in the region as well as the entire state of Israel. In other words, the alleged cap on Iran’s ballistic missiles locks-in the threat, rather than rolling it back, while doing nothing to curtail the wide range of activities Iran is undertaking to improve its missile force. This includes a concerted but concealed effort to develop an intercontinental ballistic missile (ICBM) capability.

Here is why the Supreme Leader is offering this empty gesture:

Despite being housed in underground depots, Iran has a fairly mobile ballistic missile force. This includes the ability to move these weapons across Iran on special trucks known as Transporter-Erector Launchers (TELs), making them easier to hide as well as capable of launching surprise attacks from remote locations. The production or procurement of these trucks should be impeded.

Solid-fuel propellants are desired by states who seek a more durable missile that can be fueled and then transported across the country. Moreover, solid-propellant missiles take less time to prepare before launch, making them less vulnerable to attack. Iran has been working to develop a solid-fuel, nuclear-capable medium-range ballistic missile (MRBM) via the Sejjil platform, which was last tested in 2011. An operational solid-fuel MRBM would pose a grave threat to Israel, to Iran’s Gulf neighbors and to U.S. military bases in the region. Iran might also consider looking to its partner in Pyongyang for this capability, given their longstanding missile ties.

3 - It Doesn't Place Limits on the Iranian Space Program, Which Directly Contributes to the Development of ICBMs

Iran’s Safir and Simorgh Space Launch Vehicles (SLVs) directly contribute to Iran’s development of ICBMs. In February 2016, then-DNI James Clapper told the Senate Armed Services Committee that Iran’s progress on SLVs “provides Tehran with the means and motivation to develop longer-range missiles, including ICBMs.” While not an ICBM itself, allowing Iran to grow its SLV program will help the regime attain an ICBM capability.

Based on a North Korean intermediate range ballistic missile (IRBM) called the Musudan, which Pyongyang allegedly provided to Tehran in the mid-2000s, this nuclear-capable missile is currently under development and failed its two known flight tests. Allowing Iran to further develop this puts U.S. allies in Europe and the greater Middle East in danger.

An upgraded variant of the Ghadr, this is a nuclear capable ballistic missile currently under development with a reported range of at least 1,700 kilometers. According to reports, the Emad is topped with a maneuvering reentry vehicle with finlets which are intended to increase the precision of this munition. Allowing Iran to further develop this missile puts southern Europe and Israel in danger.

A solid-fueled nuclear-capable ballistic missile with a reported range of 2,000 kilometers, which threatens Israel, parts of southern Europe and other allies and U.S. military bases throughout the Middle East.

A Land-Attack Cruise Missile (LACM) powered by a turbofan engine. The Soumar is an Iranian copy of the Russian Kh-55, and can carry nuclear and conventional warheads a reported distance of 2,000–3,000 kilometers, threatening central and southern Europe, Israel, India and other allies and U.S. military bases throughout the region. Iran allegedly tested this LACM missile for the first time in January 2017.

Iran’s first finless nuclear-capable ballistic missile, developed from an Iranian version of the Scud-C. The Qiam has a reported range of between 700 and 800 kilomoeters, which threatens U.S. allies and military bases throughout the region. At least one Qiam missile was fired by Iran into Syria during an operation against the Islamic State in July 2017.

A nuclear-capable ballistic missile with a reported range of 800 to 1,300 kilometers, which threatens Israel or possibly India. Iran’s Shahab-3 is a copy of the North Korean Nodong-A. Over the years, the Shahab-3 platform has served as the basis for advances in Iran’s ballistic missile and SLV program.

A longer variant of the Shahab-3, these nuclear-capable ballistic missiles were last tested in 2015/2016 and have a reported range of up to 1,950 kilometers. Allowing Iran to further develop this missile would put southern Europe, Israel and India in danger.

Neither the Trump administration nor Congress should take solace in Iran’s promise to cap its ballistic missiles at 2,000 kilometers. If anything, this declaration is an attempt by Tehran to overvalue something for which it has no immediate need—IRBMs—in the hopes of forestalling coercive economic measures against its ballistic missile program. During negotiations that culminated in the 2015 nuclear accord, Iran strategically overvalued the few concessions it gave, including its unreliable first-generation centrifuges. This led the P5+1 to accept Iran’s assessment of their value and give Tehran the time it needed to perfect its advanced centrifuges. Now, by proposing an illusory cap on missile ranges, Iran is looking to dupe the West again. Meanwhile, the Islamic Republic is expected to continue improving the quality of its missile force, which according to past and present DNI, constitutes the Middle East’s biggest arsenal.

In July, the United States, France, Germany and the United Kingdom condemned the launch of an Iranian SLV, the Simorgh, making clear the Iranian action was “inconsistent” with UNSCR 2231.

As Congress considers the president’s request to amend the Iran Nuclear Agreement Review Act to “fix” the JCPOA, it should codify and if possible, expand on the language found in UNSCR 2231. A nuclear agreement that sunsets in a few years, denies access to key military facilities and allows Iran freedom to perfect its nuclear-capable ballistic missiles represents an obvious danger to the long-term security of the United States and its regional partners.

Last month, U.S. Sen. Bob Corker (R-Tenn.) told the media that his current negotiations with U.S. Sen. Ben Cardin (D-Md.) focused only on ICBMs (should Iran develop them). If Congress stopped there, it would legitimize the Supreme Leader’s edict, allowing for a wide range of nuclear-capable ballistic missile development and use. Congress should instead make clear through the promise of more sanctions that, in accordance with UNSCR 2231, Iran is prohibited from all activities related to nuclear-capable ballistic missiles.

Richard Goldberg, who worked on Iran issues in Congress from 2005 to 2014 is a senior advisor to the Foundation for Defense of Democracies, where Behnam Ben Taleblu is a senior Iran analyst.