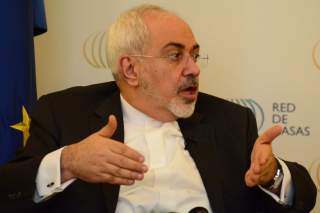 In an op-ed in The Guardian last month, Iranian Foreign Minister Mohammad Javad Zarif took his country’s ongoing nuclear fairy tale—according to which Iran has “done no wrong” in the nuclear realm—to the next level. On the basis of his claim that Iran has upheld the spirit of the NPT, whereas the other side has not adhered, he is now making demands that nuclear states begin to disarm and that a Weapons of Mass Destruction Free Zone (WMDFZ) be established in the Middle East. Not only that, but based on Zarif’s remarks, it is noted that Iran is signaling that it would like to take on the leadership of the campaigns for disarmament and the creation of a WMDFZ.

But here's the thing: Iran has blatantly violated the spirit and the letter of the NPT because it worked on a military nuclear capability for decades, in violation of the NPT. Still, Iran continues the farce by denying both the work it did in the past, and the fact that it still harbors military nuclear ambitions. Iran is of course a regional bully—a supporter of terrorism and a state that has the audacity to say that another sovereign state, Israel, has no place in the Middle East, and how it longs for Israel's annihilation.

Moreover, Zarif speaks as if Iran has already proven that it has implemented the JCPOA in good faith. But even those who believe that the JCPOA is a good deal know that Iran still has at least 15 years to prove that it deserves some of the trust that it lost over the years of flagrant violations of the NPT. Iran is currently only at the beginning of a very long path before it can venture to be accepted as a trustworthy country.

In essence, Zarif's latest gross misrepresentation and dangerous manipulation of reality is a very well-known Iranian tactic: profess innocence while blaming the other side of acting in bad faith. While the P5+1 should have been well aware of the tactic—and prepared to confront it—they did the exact opposite in the negotiations. By not squarely confronting Iran on the weaponization aspects of its nuclear program, they have enabled Iran to hold on to the “done no wrong” narrative, and now Iran has the platform to continue to abuse it. Because the Iranian narrative was not crushed by the P5+1, Zarif allows himself to make the outrageous statement that Iran "walked the walk" to consolidate the non-proliferation regime.

Zarif is not only portraying Iran as a stellar example of a state that upholds international commitments, but as one that could have a role in promoting a WMDFZ. For anyone with any doubts that this idea is the height of absurdity, take a look at a recent statement by Khamenei's political advisor Ali Akbar Velayati in an interview to Al-Jazeera. It simultaneously sheds light on Iran's so-called respect for international rulings, and its attitude toward Israel: "We are not necessarily required to accept everything decided by the Security Council. Let me give you an example that is important to us and to you…. The Security Council might make resolutions in favor of Israel. We would not accept or recognize these resolutions. This is what the Arab and Islamic countries would do….  The Islamic Republic of Iran will not succumb to any international resolution that contradicts our strategic interests and our sovereignty." So much for adherence to international commitments; so much for leading a discussion on WMDFZ.

That does not mean, however, that the rather ambitious and unprecedented idea in the history of disarmament should not be dealt with. Given the deep-seated suspicions that many of the potential participants a Middle East WMDFZ harbor against Iran, and the need to start building confidence by implementing the nuclear agreement to the letter, Iran could contribute to building confidence and creating the framework that might enable the regional parties to discuss a WMDFZ. Long before that, however, the region —which is going through a violent transformation with no end in sight—will be in dire need of a regional security forum in order to address an entire range of threats in a comprehensive manner. The long ascribed notion that Zarif reiterates, whereby the parties either establish a WMDFZ or not, should be rejected in favor of a more comprehensive approach to a regional security dialogue, and steps toward peace and security.

An article featuring the Iranian foreign minister as a champion of the NPT could not have been written if the P5+1 had insisted on the full disclosure of Iran’s past activities. One can only hope that the IAEA will not budge on the long list of questions that were posed to Iran in order to determine by December 2015 the kind of activities that Iran pursued in contravention of the NPT. Meanwhile, Zarif’s statements must be recognized for what they are—cynical manipulation of reality by a dangerous and deceptive regime.

Ambassador Shimon Stein is a senior fellow at the Institute for National Security Studies (INSS), Tel Aviv University; Dr. Emily Landau is Head of the Arms Control and Regional Security Program at INSS.