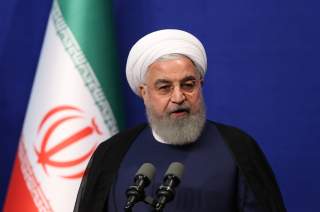 Iran’s Supreme Leader Ayatollah Khamenei told Japanese prime minister Shinzo Abe in Tehran that his country “will not negotiate under pressure.” His meeting with Abe was followed by new acts of sabotage against oil tankers in the Gulf of Oman, raising concerns of a full-blown conflict erupting. While the perpetrator is unknown, the United States and Iran are increasingly locked in a stalemate that neither can afford to live with. The potential still exists for negotiations, provided President Donald Trump makes a course correction and offers credible incentives for a deal.

A year after reneging on the Iran nuclear deal, President Trump’s so-called “maximum pressure” campaign against Tehran has crash-landed. Not only is the regime in Tehran still standing despite the expectations of senior Trump advisors, but Iranian leaders remain defiant in the face of Trump's calls for talks. This was reinforced by Khamenei during his meeting with Abe, with him saying that he does not trust the United States or believe that it seeks “genuine negotiations.”

Iranian officials have made clear they will not negotiate while bearing the brunt of the Trump administration’s so-called “maximum pressure” campaign. In fact, Iran’s modus operandi in response to pressure has long been to increase its own pressure. To not do so, Iranian leaders have conveyed, is to signal weakness and invite even more egregious demands and pressure. Iran followed this strategy to get the July 2015 nuclear deal, formally known as the Joint Comprehensive Plan of Action (JCPOA). Recent Iranian rhetoric and actions suggest it is following a similar playbook this time around.

Trump has painted himself into a corner with Iran, chiefly due to his advisors’ incorrect assumptions about Iran’s durability and a misreading of past U.S. pressure policies against Tehran. At this point, Trump has depleted every punitive financial and political instrument in the U.S. arsenal, leaving him with few options left to increase pressure short of military strikes.

Meanwhile, Iran has only recently begun using its own leverage. The path ahead is dangerous, but Iranian officials have importantly signaled a belief that a tit for tat with the United States can lead to a deal. To facilitate negotiations, Trump must exercise patience as Iran plays its hand and realize that a war could sink his reelection chances, while engaging in diplomacy carries little risk and could even lead to a breakthrough.

In recent months, Iran’s Supreme Leader Ayatollah Khamenei has consistently ruled out negotiations with the United States under current circumstances. A case in point was in early May, when he declared that negotiations “are poison as long as America is what it is now.” However, in another recent speech, he hinted at what conditions would be conducive for a deal. Speaking after Iran announced that it would cease compliance with aspects of the JCPOA, Khamenei significantly stated that Iran would meet U.S. pressure with its own pressure “in order to decrease pressure” on itself.

Khamenei’s remarks do not foreclose the potential for negotiations, but rather make clear that Iran will not negotiate until it has enhanced its bargaining position. Until recently, Iran was committed to a policy of “strategic patience” and remaining in the JCPOA until Trump left office. However, with Europe and other powers failing to make up for lost Iranian sanctions relief and Trump upping the ante with new oil sanctions and designating Iran’s Revolutionary Guards as a foreign terrorist organization, strategic patience may have proven unsustainable.

Iran has raised the stakes for Trump in recent weeks: according to U.S. officials, adopting “extremely high levels of military readiness,” engaging in “new, threatening activity” in the region, and potentially sabotaging oil-exporting infrastructure that circumvents the Strait of Hormuz. However, perhaps most consequentially, Iran announced last month that it would begin gradually breaching nuclear limitations set out by the JCPOA. The head of the Atomic Energy Organization of Iran (AEOI) has since said Iran would surpass the JCPOA’s limit on its low-enriched uranium stockpile on June 27.

Regarding Iran’s leverage, Khamenei has said “our pressure tools aren’t only of a military nature, though if needed we will use military means.” However, he emphasized in the same speech that, in trying to impose its own pressure, Iran will focus on advancing its nuclear program. He said of Iran's recent decision to breach certain JCPOA limits: “What the Supreme National Security Council did in saying that we will not implement our commitments in certain areas and will leave our commitments [with the JCPOA], this was the right thing.”

Iran is, in fact, following the same playbook it used to reach the JCPOA. That deal was preceded by twelve years of escalation and diplomacy, in which each side increased its bargaining position and painstakingly came to understand where the other side would or would not budge. Iran’s bottom line was to have what it deemed its right under the Nuclear Non-Proliferation Treaty to the nuclear fuel cycle and uranium enrichment be respected. For the United States, it was that Iran's pathways to a nuclear weapon be foreclosed.

During the Iranian nuclear crisis, there were several missed opportunities before both sides came to accept each other’s bottom-line interests. In March 2005, after two years of negotiations between Europe and the reformist government of President Mohammad Khatami, Iran put forth a proposal remarkably like the JCPOA. However, the proposal was spurned by Europe at the behest of the George W. Bush administration, which took the maximalist position of refusing to accept any uranium enrichment on Iranian soil. Jack Straw, Britain’s foreign secretary at the time, later said of the negotiations’ failure: “[H]ad it not been for major problems within the US administration under President Bush, we could have actually settled the whole Iran nuclear dossier back in 2005.”

Another possibility for a nuclear deal occurred during the tenure of hardline Iranian President Mahmoud Ahmadinejad. It came in the form of a Russian proposal outlining a series of reciprocal steps that could have led to a JCPOA-like settlement. While Ahmadinejad welcomed the proposal, a Russian diplomat said it was “unlikely to succeed” because the Obama administration was dedicated to increasing pressure. Indeed, Secretary Clinton announced after the proposal’s unveiling that the United States was “committed” to its “dual track of pressure and engagement,” and sought new UN sanctions.

Notably, the Obama administration’s pressure campaign was marked by the broadest sanctions ever imposed on Iran. Unlike Trump today, Obama had the support of Europe and backing from several UN Security Council resolutions. His sanctions cut Iran out most international trade, stifled its oil exports, and plunged the Iranian economy into a deep recession. Obama also consistently threatened that “all options are on the table” and his administration deployed the world's first cyberweapons to sabotage Iran's nuclear program.

By 2012, many observers believed the United States and Iran were on the cusp of war, with reports that the White House had “sent a second aircraft carrier to the region and readied attack aircraft.” U.S. officials were also telling the media that they “did not expect” to “reach an agreement with Iran at this stage” because “maximum pressure is not yet being felt by Iran.” For much of this period, the U.S. position was that Iran had to stop uranium enrichment and shutter its Fordow enrichment facility. These positions proved untenable.

In the face of increased U.S. sanctions and demands, Iran upped its own pressure by increasing the size and scope of its nuclear program. During the period from 2005 to 2013, Iran increased its number of uranium enrichment sites from one to two, the number of operating centrifuges from 164 to roughly 9,500, and its stockpile of low-enriched uranium from about 100 kilograms to more than 10,000 kilograms. It also developed more advanced centrifuge models and began enriching uranium to 20 percent, of which it amassed a stockpile of 185 kilograms. By 2013, Iran’s breakout time—i.e. the amount of time needed to amass the amount of fissile material required for a single nuclear weapon—was by some estimates as low as three months.

It is a misconception that sanctions brought Iran to the negotiating table under President Obama or were the primary factor leading to the JCPOA. A deal only became possible after the U.S. communicated a shift in its bottom line, from no enrichment to no nuclear weapons, via backchannel talks in Oman in March 2013. During the next two years, Iran and the United States negotiated to cash in their respective bargaining chips of nuclear capacity and sanctions to reach the JCPOA. Importantly, these talks were marked by high-level bilateral dialogue and an atmosphere of respect and mutual understanding—not condescension and threats.

The previous round of nuclear negotiations with Iran holds many important lessons for future U.S.-Iran dialogue. For the Trump administration, the chief lesson should be that it cannot rely on the coercive power of sanctions. The nuclear crisis period bears out that Iran will weather a severe amount of economic pressure to secure what it views as its core interests. The same is holding true today with Trump’s “maximum pressure” campaign, as Iran has not capitulated to Secretary of State Mike Pompeo’s maximalist twelve demands and is now responding to pressure with pressure.