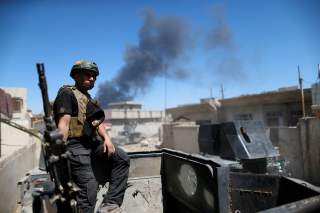 Iraqi leaders of the Popular Mobilization Forces, a group of mostly Shi’ite militias, have put out conflicting statements accusing the United States, Israel and foreign forces of involvement in mysterious explosions that damaged munitions warehouses over the last month. On Wednesday, August 21, the powerful paramilitary leader Abu Mahdi al-Muhandis said the Iranian-backed Shi’ite militias would hold the United States responsible for recent alleged airstrikes and that the threat came from “four Israeli drones” brought into Iraq via Azerbaijan.

Muhandis is the deputy of the PMF, but he is also the leader of Kata’ib Hezbollah, a militia closely linked to Iran’s Islamic Revolutionary Guard Corps. The U.S. Treasury in 2009 designated the group a terrorist organization. Muhandis fought alongside the IRGC in the 1980s and is wanted in connection with attacks in Kuwait that took place in the 1980s.

During the last mount for control, explosions destroyed munitions at PMF warehouses in Amerli, Camp Ashraf, Camp Falcon and near Balad Air Force Base. The explosion on August 20 was so large senior Iraqi officials visited the site. Now the Shi’ite militias, who are officially part of the government’s security forces, must figure out how to react. Muhandis statement is the most clear. He holds the United States responsible and asserts exactly how the attacks have happened, alleging Israeli drones transported via Azerbaijan to Iraq with knowledge of the United States. Azerbaijan does not share a border with Iraq. Arabic media reports from Asharq al-Awsat and Al-Ain have alleged that Israel was behind the attacks.

Muhandis has claimed via Facebook and Twitter that the PMF will defend itself and attack any drone flying over PMF bases. However, Faleh al-Fayyadh (Falih Fayyad), the head of the PMF and national security advisor of Iraq, has said that the incident is being investigated. He said on Wednesday that the incidents appear to be linked to an “external force” or foreign forces. Initial investigations, which he did not describe, had concluded this. This is an important distinction. Blaming nebulous “foreign” actors—rather than asserting a link between Israel, the United States and Azerbaijan—shows a more cautious and judicious response. The statement issued by the official PMF illustrates the internal discussions and disagreements within the organization.

This is important because the PMF is made up of several powerful groups, such as the Badr Organization, Kata’ib Hezbollah, Asaib Ahl al-Haq, Harakat Hezbollah al-Nujaba, Kata’ib Imam Ali, and others. These are formed into brigades that were created during the war on the Islamic State. These units were themselves rooted in older militias and groups, some of which had fought the United States and fought against Sunni extremists after 2003. Several senior PMF members have roots going back to the 1980s fighting alongside the IRGC against Saddam Hussein. The PMF has struggled to unite all its brigades, which tend to be linked to political parties, religious structures, and sometimes even tribal or minority groups. For instance, the 30th Brigade in Nineveh plains is made up Shi’ite Shebeks, a minority group. It has refused orders from Baghdad to be redeployed and Baghdad has had to relent on some of its orders after protests by Shebeks closed a road from Mosul to Erbil. The militias therefore appear sometimes independent of federal control, stockpiling their own weapons on their own bases. It is these bases that have now been victims of mysterious explosions, allegedly targeted in airstrikes. These bases may contain small arms, but some are also said to contain missiles and heavier munitions supplied by Iran.

The recent alleged airstrikes now bring the tension to a new height amid disagreements within the PMF on what to do next. Iraq has wanted to downplay claims that Israel was behind the attacks. But Iraqi members of parliament and militia leaders, like Qais Khazali, want answers. In December 2017, Khazali went to Lebanon and visited the area near Israel’s border. Some Shi’ite militias in Iraq have said they could join a future war alongside Hezbollah against Israel. Now those like Khazali wonder if the conflict is already closer to home.

A timeline of statements by the various groups within the PMF show that after the first incidents in July the groups alternated between denial and blaming foreign actors. U.S. Central Command even put out a statement on July 19 noting that “we are aware of reports of an attack against the Iranians and a Popular Mobilization Force unit in Salah ad-Din. US Forces were not involved.” A member of the State of Law Coalition in Iraq’s parliament accused the United States of being behind the bombing at Camp Amerli that month.

In mid-August, after the explosion at Camp Falcon, Asaib Ahl al-Haq accused Israel of being responsible for the attack. A member of the Fatah Coalition in Iraq’s parliament alleged the United States was responsible. Harakat Hezbollah al-Nujaba also accused the United States of being behind the mysterious explosions. Iraq’s government sought to allay concerns by adding more strict rules to use of Iraq’s airspace, including by coalition aircraft operating against the Islamic State.

U.S. forces could be targeted in the wake of subsequent incidents. A Lead Inspector General report on Operation Inherent Resolve published in early August noted that the threat from Iranian-backed forces in Iraq increased in the past quarter between April and June 2019. The OIR spokesman issued a statement in Arabic on August 21 to try to allay concerns in Iraq. It noted that the United States is only involved in Iraq as part of the mission to assist Iraqi Security Forces and to defeat the Islamic State. But the PMF is aware of other statements from the White House in December 2018 that the United States could use Iraq to “watch over Iran.”

The initial reactions from the PMF, whose political allies in parliament make up the second largest parliamentary group as part of the Fatah coalition, show disagreement on whether to blame Israel, the United States or a more general “foreign” actor. The militias that have been designated as terrorists by the United States are more likely to blame the United States as part of a campaign of incitement against U.S. forces that has gone on for years. However, the PMF’s high-level officials appear more reticent, biding their time and seeing how the Iraqi government will respond.