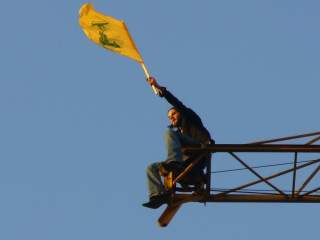 Lebanon defied its fellow Arab League members this week by rejecting a Saudi-sponsored vote labeling Hezbollah a terrorist organization. The move comes on the heels of Riyadh reversing its decades-long support for the Lebanese government by suspending a four-billion-dollar security-aid package, in frustration over Hezbollah’s growing control over virtually all aspects of the country’s government. The Gulf states soon followed suit. The Arab League vote and the aid cutoffs, however, won’t be enough for Lebanon to shake off Hezbollah’s domination. As the Shiite party continues to escalate tensions, its Lebanese political foes have shown themselves to be too feckless to confront the organization and reclaim their country.

Since establishing Hezbollah in Lebanon in 1983, Iran has steadily brought the diminutive country into its “axis of resistance” against the West. For their part, the Saudis refrained from directly meddling in Lebanese affairs as long as their own regional war with Tehran remained “cold.” But recent developments—including the Yemeni civil war and the signing of last summer’s Iran nuclear agreement—have made Riyadh more vigilant about the regional expansion of Iranian influence.

When its diplomatic missions in Iran were attacked in January, the kingdom demanded Arab unity in response. However, as the Arab League vote to condemn the attacks, only Lebanon objected. Lebanese Foreign Minister Gebran Bassil, a member of the Hezbollah-allied Free Patriotic Movement (FPM), said he rejected the resolution only because it criticized Hezbollah. However, he later also objected to the Organization of Islamic Cooperation’s own condemnation, even though it lacked any criticism of the Shiite party and denounced only Iran.

Lebanon’s message was clear: it would not hesitate to risk Arab goodwill in favor of Tehran’s interests. Realizing this, the kingdom ended its traditional neutrality between Beirut and the Party of God, part of a comprehensive review of its relations with Lebanon. Bassil’s more recent rejection of the League’s designation and his description of Hezbollah as “an essential component of Lebanon” will now likely lead to similar reactions from other Arab countries.

Unsurprisingly, Hezbollah has responded to the Saudi measures by escalating its rhetoric against the kingdom, hoping to further inflame tensions between Lebanon and its erstwhile Gulf benefactors. Regrettably, Beirut’s Arab isolation will only push it closer to Iran, facilitating Hezbollah’s stated goal—as articulated by the organization’s infamous 1985 Open Letter and reiterated this year by its deputy chief Naim Qassem—of transforming the republic into an outpost of the Islamic Republic.

In an official statement, the party said Riyadh’s suspension of military aid “proves it nurtures terrorism.” The party’s politburo chief called Saudi Arabia a “takfiri terrorist nation,” and said he hopes the monarchy collapses, “God willing.” Against the backdrop of revelations of Hezbollah plots against the kingdom from Yemen, party chief Hassan Nasrallah boasted that his proudest accomplishment was not the group’s 2006 “victory” in a month-long war against Israel, but a rabble-rousing speech in 2015 against the Saudi-backed coalition’s intervention in Yemen to rile up Shiite opinion against Riyadh region-wide. A week later, he dismissed the decades of generous aid that the Gulf Cooperation Council (GCC) had provided to Lebanon, and accused Saudi Arabia of having “the same mentality as ISIS.” The verbal attacks continued after the Arab League vote, with Qassem calling the designation a Saudi “declaration of aggression” that placed the kingdom alongside Israel as Hezbollah’s enemies.

Hezbollah reaction has not been limited to rhetoric. Its cabinet ministers also blocked government efforts to end the diplomatic crisis, including Prime Minister Tammam Salam’s suggestion of sending a conciliatory delegation to the Gulf, and demanded a Saudi apology instead. Without specifying his reasons, Salam soon canceled the delegation.

Hezbollah’s political allies, particularly Foreign Minister Bassil, have been equally unapologetic. Attempting to calm tensions, Salam convened an emergency cabinet session to reaffirm Lebanon’s commitment to good relations with Saudi Arabia and the “Arab consensus,” saying the foreign minister had erred with his Arab League vote. Bassil fired back, saying it was the prime minister’s remarks that were unrepresentative of Beirut’s policy and that Lebanon would always choose “national unity”—apparently a euphemism for supporting Iran over the will of fellow Arab states.

Most disappointing to the Saudis was the weak response of their allies within Lebanese politics who preferred to accommodate Hezbollah. That weakness was likely motivated by fear of Nasrallah once again sending his armed thugs through the streets of Beirut, as he did in May 2008, when the government moved to shut down the organization’s telecommunications network. Lebanon’s defense minister Samir Moqbel, an appointee of an anti-Iranian former president, even suggested the government consider Tehran’s offer to compensate for the suspended Saudi aid. And after the GCC sanctioned Hezbollah-affiliated media, Lebanon reportedly let Iran set up a media-operations center in Beirut to coordinate the group’s various news outlets.

The official response by the March 14 Alliance—the political grouping ostensibly opposed to Hezbollah’s rival March 8 Alliance—failed to criticize Bassil’s initial vote at the Arab League. Even Saad Hariri, leader of March 14 and the Saudi-allied Future Movement, brushed aside the Gulf states’ designation of Hezbollah and vowed to continue his party’s heretofore fruitless dialogue between their parties. He also doubled down on his presidential nomination of the staunchly pro-Hezbollah candidate Suleiman Frangieh, who responded to the GCC decision by calling the group the “pride of Lebanon and the Arabs,” and said the designation “serves our only enemy, Israel.”

Lebanon’s politicians are under no illusions about Hezbollah’s designs for the country. However, they find themselves presented with two equally unpalatable options: losing vital Saudi (and wider Arab) support by becoming an Iranian satellite, or risking a violent Hezbollah reaction by trying to rein in the Shiite organization. Lebanon’s feckless political leaders have consistently chosen the latter option. Lebanon’s diplomatic crisis merely underscores the reality that fear has deprived Lebanon’s leaders of the will to save their own country.

David Daoud is an Arabic-language research analyst at the Foundation for Defense of Democracies.