Iran's Protests Show the Cracks in the System 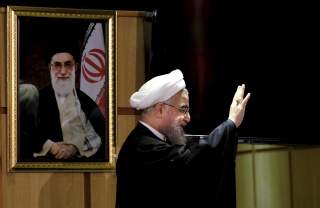 Just a fortnight ago analysts were complimenting Tehran for its recent foreign-policy successes in Syria, Lebanon, Iraq and Qatar, and referring to it as the new superpower in the Middle East. However, the past week has seen the inherent fragility of Iran’s political system exposed, thanks to the outburst of spontaneous anti-regime protests across the country, which had left at least twenty-one dead as of this writing.

These protests have left most outsiders baffled. However, it would not have come as a surprise to close observers of the Iranian scene. Economic difficulties—high inflation combined with economic stagnation and high rates of unemployment, particularly among the youth—that faced large segments of the population and cut across the rural-urban divide were clear indicators that unrest was around the corner.

Expectations of economic improvement had been raised sharply following Iran’s nuclear accord with the P5+1 and the partial lifting of economic sanctions linked to Iran’s nuclear program. The Rouhani government’s main argument justifying the nuclear deal, whereby Iran gave up its pursuit of nuclear weapons, was that by removing economic and financial restrictions it would allow Iran to grow to its full potential, improving the lot of the common people. These expectations have been dashed—largely thanks to the Trump administration dragging its feet on lifting sanctions, the imposition of fresh American sanctions unrelated to the nuclear issue, and the threat of American sanctions on European and other entities willing to enter into economic cooperation with Tehran. In fact, by many measures, especially the level of youth unemployment, which is as high as 40 percent, the situation has become worse since the nuclear accord. President Trump’s refusal last October to certify the nuclear agreement has also raised the specter of total collapse in the near future.

The endemic corruption attributed to multiple agencies and entities linked to the regime have made matters worse. The president’s attempt to reduce corruption has run into severe opposition from vested interests, including “foundations,” that have built economic empires on the basis of their perceived closeness to one or more of Iran’s multiple centers of power, collectively known as the “establishment.”

The Islamic Revolutionary Guards Corps, initially set up as a paramilitary force to defend the ideals of the Islamic Revolution, has become a major economic player, controlling almost one-fifth of the nation’s economy, mostly through its Khatam al-Anbiya industrial conglomerate. One of the protesters’ major complaints is the large amount of money allocated to clerical institutions and IRGC-affiliated concerns in this year’s state budget, apparently leaked by supporters of President Rouhani, while the common people struggle to make ends meet.

The many-headed nature of the Iranian establishment has created immense political problems for the country, as well as economic ones. The hybrid power structure has not only facilitated the creation of a huge state-subsidized sector in Iran’s economy, but also often paralyzed policymaking due to fundamental disagreements among various components in the machinery of state.

The hybrid system, exemplified by the paired terms “Islamic” and “Republic” in the state’s name, was initially conceived as a combination of clerical institutions, such as the Guardian Council and the Assembly of Experts, with an elected presidency and a representative parliament. Decisions were to be made on the basis of consensus and compromise by the two sets of institutions. The supreme leader, although the preeminent cleric in the country, was expected to be above the fray and to arbitrate if disagreements arose between the clerical and representative institutions. In fact, Ayatollah Ruhollah Khomeini set up the Expediency Council to reconcile disagreements between the two sets of institutions where they appeared to be severe. The system worked as long as Khomeini, the founder of the republic, was alive. But his successor, Ayatollah Ali Khamenei, lacking Khomeini’s stature, aligned himself with the clerical establishment (or certain factions thereof) and acted most of the time as a partisan rather than an impartial arbitrator.

This led to two outcomes. First, the clerical institutions, with the support of the supreme leader, more often than not vetoed decisions taken by representative institutions that they did not like. This was especially the case when a reformist government and parliament were in office, as was the case during Mohammad Khatami’s presidency. Second, through their increasing control of the coercive power of the state, which answered to the supreme leader, the clerical establishment blatantly interfered in the electoral process, as in 2009, when they imposed their candidate on the nation.

Above all, this hybridity meant that while the clerics could take credit for everything that went right, the representative institutions, especially the president, were left with the blame for anything that went wrong. The emergence of extraconstitutional centers of power, primarily the IRGC, added to the bewildering array of decisionmaking authorities. The IRGC, normally but not always in tandem with the most hard-line elements of the clerical establishment, acted as a check on elected representatives’ liberal tendencies. Furthermore, the IRGC had its own corporate interests that it wanted to protect, and like the janissaries of the late Ottoman period, it maneuvered deftly to preserve them at the cost of state interests. In fact, the IRGC often conducted its own foreign and security policies, often at odds with the objectives of the elected government.

These inefficiencies of what has become a dysfunctional political system seem to be catching up with it now. Irresponsible factionalism has become a bane of the Iranian system in the absence of organized and recognized political parties. Hard-line critics of the Rouhani government, reports suggest, initiated the current bout of unrest in the conservative stronghold of Mashhad in order to discredit the president by taking advantage of the economic discontent of ordinary Iranians.

However, two things happened quickly that changed the nature of the protests. First, the movement morphed into a much broader condemnation of the regime, with anti-Khamenei slogans being raised alongside anti-Rouhani ones. Calls for “death to the dictator” (meaning Khamenei) and the destruction of the “regime” soon became the main motif of the movement. Second, unrest spread like wildfire to several dozen locales very distant from each other, including the predominantly Kurdish city of Kermanshah, in the northwest of the country—over seven hundred miles from Mashhad in the east. Dissatisfied minorities in Kurdistan and Baluchistan quickly added their own grievances to the chants against the regime.

Unlike in 2009’s Green Movement, which opposed that year’s rigged presidential election, this time the movement (if we can speak of it in the singular) is far more amorphous in character. Its target is the “system” in the broadest sense of the term, rather than any single event or figure. Also unlike 2009, when the movement was primarily middle-class and concentrated in large urban centers, this time around working-class residents of smaller cities and provincial towns have taken the lead. Furthermore, it does not have a united leadership—even symbolically, as was the case in 2009.

A final point regarding the current movement is that protesters have raised slogans against Iran’s costly foreign involvements in Syria, Lebanon, Iraq, Yemen and elsewhere, which they see as draining resources that the state should have spent on ameliorating the economic conditions of its own people. It is, therefore, a repudiation of much of the strategic success that Iran has lately achieved in the region recently.

Whether the uncoordinated demonstrations in different parts of the country are able to coalesce into a coherent challenge to the regime is anybody’s guess. At the moment, odds seem to be against it—but much will depend upon the government’s response to the challenge. If the regime responds with brutal force, it is likely to provide the movement not only with martyrs, but also with a greater stimulus to coalesce in order to bring down the regime. This is what happened in 1978–9, when the shah’s brutality turned not only much of the populace but also the bulk of the security forces against him. Once the latter refused to fire on their own people, the shah’s regime collapsed like a house of cards.

On the other hand, if the government handles the situation with greater finesse and sagacity, as Rouhani seems to be suggesting, the demonstrators’ fervor may peter out, only to resurface once again in a few years’ time.