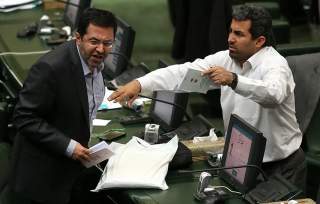 The election of Hassan Rouhani as president last year ushered in hope of a new era in politics to reform Iran out of the chaos sown by eight long years of Mahmoud Ahmadinejad and strike a deal to end ruinous economic sanctions imposed by the West.

But the parliamentary elections in 18 months’ time are equally important as they will determine if the Iranian elite will lock in real reform or not. Parliament has the power to keep Rouhani’s “government of hope and prudence” down. Similarly, it has the power to give it wings to unshackle Iran from sanctions, isolation and even the impunity of its security and intelligence services.

Half of the Majles (parliament) is composed of “principlists,” a conservative bloc espousing fidelity to what its followers say are the founding values of the 1979 revolution. Many sit under the banner of the United Front, fair-weather friends to the government led by Ali Larijani, speaker of the house and a staunch loyalist to Supreme Leader Ali Khamenei. Others form the Steadfastness front, an ultraconservative faction vociferously opposed to any talk of reform and backed by Iran’s most infamous hardliner Ayatollah Mesbah-Yazdi. Most reformists were blocked from running in the 2008 and 2012 elections, their key parties made illegal by the conservative-biased Guardian Council (a body half directly, half indirectly, constitutionally controlled by the Supreme Leader). Reformists now only make up less than a quarter of the Majles. None are very well known.

Many of these conservative MPs have been making life difficult for the young administration of Rouhani, summoning cabinet ministers for regular questioning; stoking rumours about the president’s PhD (“It’s a fake!”); and whispering of Khamenei’s alleged dissatisfaction with his president. Last month they drew blood, coordinating no-confidence win to impeach Reza Faraji-Dana, a reformist minister responsible for higher education whose liberalising reforms were popular among professors and students—and threatened to air the radicals’ dirty laundry.

The reformists, revived by their critical role in getting centrist Rouhani elected, are preparing to fight back to win more power for their man in the 2016 elections and for their own influence in the governance of the Islamic Republic. Horse-trading has begun to forge a reformist-centrist pact to kick out of parliament the extremist fringes of the conservative camp.

Mohammad Reza Khatami, a senior reformist figure and brother of former president Mohammad Khatami, let the cat out the bag on August 17: "Reformists are now working together and we are sure that we will have positive results in the next Majles elections” and will sideline "minority” extremists, he said. Khatami was banned from leaving Iran soon after. Hamid Reza Jala'ipur, an academic and advocate close to Rouhani, echoed Khatami’s announcement, laying down the gauntlet to the principlists: "They have a choice to make: they can either be like Ali Motahhari [a moderate principlist who supports the government and is likely to enter the mooted reformist-centrist coalition], or put their hope on the Guardian Council's disqualifications."

The secretary general of the centrist Construction Party has announced that reformist parties may reach an agreement to nominate Ali Akbar Nateq Nouri, who has a record of opposing radicals, as their lead candidate 2016. He officially denies it. Failed presidential candidate and one-time vice president during Iran’s reformist years (1997-2005) Mohammad Reza Aref has announced he is running, probably for a Tehran seat, though he is likely too far left to command a wide coalition and is “harmless as a matchstick” according to some observers, evoking an odd Persian idiom.

"Inspired by the 2013 presidential election, the objective of the reformists in the coming Majles election is not to win per se but to ensure that through alliances throughout the country with centrists an even conservatives they will prevent the reelection of boisterous hardliners to the Majles,” explains Professor Farideh Farhi, an Iran scholar formerly at Tehran University and now at the University of Hawai'i. “A Majles that looks more like the Fifth Majles [following 1996 elections] - with a balance of conservatives, centrists and some reformists - is more than good enough. The objective is to create a Majles more in synchrony with Rouhani and not a reformist win which is quite unlikely anyways given the expected disqualification by the Guardian Council of many reformist candidates.”

The Guardian Council’s arch-conservative chairman, Ahmad Jannati, recently delivered a caustic speech against Iran’s reformists, leaving little doubt that the Council will not continence a reformist majority in 2016.

The moderate Ebtekar newspaper on September 10 reported that Jannati warned of the "return of seditionists", an extremely loaded term for the reformists involved in stoking the tumult that erupted in Tehran after the disputed reelection of Ahmadinejad in 2009.

"Certain individuals have designs for the parliamentary elections," he said, adding that he "is in possession of documents which indicate that after resolving the nuclear issue, certain individuals intend to siege [sic] parliament". The hardline press regularly foretells of the “reformists’ conquering of institutions of power, one after another”.

“Jannati always tries to vet candidates not in keeping with his views,” observes Farhi. “His dilemma is that most folks are not in keeping with his views these days. He is unhappy with reformists but he is not quite happy with clerics close to the Steadfastness Front either—in the past Council of Experts elections many of the candidates close to Ayatollah Mesbah-Yazdi were disqualified. It may be easy for him to try to disqualify known reformist or hardline candidates as the Guardian Council has done in the past but as not easy to disqualify conservatives and centrists.”

At the very least it seems highly likely that the Guardian Council will prevent an "an independent presence of reformists in the 10th Majles elections”, as called for in reformist newspaper editorials.

Despite the greater advantage the Council gives Iran’s right, hardliners opposed to the current administration may be seeking to form their own coalition with more moderate conservatives to forestall a pact between the reformists and those same moderates.

Although announcements of any alliance would not take place until the weeks preceding the March 2016 parliamentary elections, Ali Larijani’s name has been mooted as a possible bloc leader of a rightist coalition to shut out the reformists.

There is evidence that there is a split within the Steadfastness Front, whereby the Qom branch, represented by Ayatollah Mesbah-Yazdi, is insisting on a maintaining a hardline policy—even if that means losing the election—while the Tehran branch seeks to court the moderate conservatives.

“The elites are all talking a lot about the election. Rumours about who can run and who will run have started,” says Dr Payam Mohseni, director of the Iran Project at Harvard, who recently returned from a long trip to Iran in which he interviewed members of the elite from across the political spectrum. “You can sense the disappointment some of hardliners who feel the government’s negotiations towards a nuclear deal compromise Iran’s interests. They worry about Rouhani’s rising power, especially if he wins sanctions relief from a normalisation of Iran’s nuclear file.”

So too the reformists worry about the president they got elected. Rouhani could turn more conservative and do deals with the moderate conservatives before March 2016 to preserve his own power to get reelected, especially if his administration fails to live up to its primary objective: significant sanctions relief.

“Now that Rouhani’s first year in office has lapsed, the honeymoon is over. Some reformists fear he may become more conservative,” says Dr Mohseni.

Whatever happens there’s much resting on 2016. Bernard Hourcade, a French geographer and research director at The French National Centre for Scientific Research, said that the 2016 Majles elections will be a “landmark in the history of political Iran in the emergence of a new consensus,” he told the Wilson Center earlier this year. The elections result will “support or not support the opening of Iran,” he said.

Rouhani’s success in “normalizing” the nuclear file and negotiating the concomitant sanctions relief will determine the political makeup of the next Majles election. Win the sanctions relief and he wins a considerably more cowed parliament. Lose it, and he risks becoming political mincemeat.

Arron Reza Merat is an EIU Iran analyst and former Tehran correspondent for the Economist.